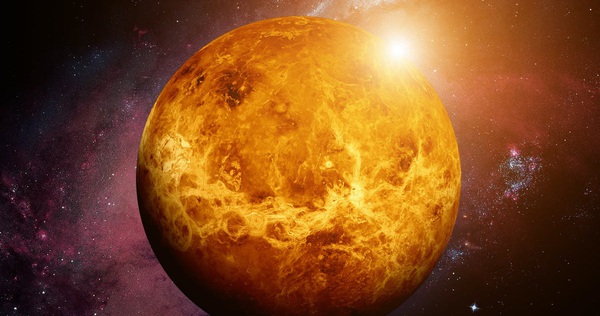 It has been 30 years since the US space agency NASA launched a spacecraft to visit Venus, the planet 108.2 million km from the sun. Venus is often considered a twin to Earth, because both are close enough to the Sun to bask in its heat. However, this is actually a pair of “evil twins”, because Venus and Earth are two worlds separated in an extreme way.

Recently, NASA and the European Space Agency announced three new spacecraft that will launch to Venus around 2030. These missions will promise to deliver a major upgrade to the knowledge system. ours about this planet. But first, let’s explore some of the very strange aspects of Venus that make it an interesting target for science probes.

Venus rotates clockwise on its axis, like Uranus. All the other planets in the solar system rotate counterclockwise when viewed from the North Pole.

One theory is that Venus initially rotated in the same direction as the other planets, but at some point it turned upside down. Or it rotates counterclockwise at first, then slows down and stops, and then rotates in the opposite direction.

Another theory is that the planet may have been hit by a large object, which forced it to spin in a different direction. This idea could also explain why the planet’s rotation is so slow. One day on Venus is equivalent to almost 250 Earth days. But it orbits the sun with a time equivalent to 225 Earth days. This means that on Venus, “a day” will be longer than “a year”.

Venus is the hottest planet

The extreme heat is Venus’s most iconic feature, also something scientists still don’t fully understand. Venus is even hotter than Mercury, the planet orbiting closer to the Sun. The average temperature of the planet is more than 850 degrees Fahrenheit, or 454 degrees Celsius.

The long-held theory is that Venus has an atmosphere rich in carbon dioxide, which traps the heat to scorch the planet. The surface temperature of Venus can melt lead and destroy space probes within hours.

Venus is covered in volcanoes

About 80% of the surface of Venus is covered by flat volcanic plains. No one is sure what created these volcanoes and whether they are still active. Volcanic structures also come in all sorts of ranges and areas, from towering shield volcanoes to flat-lying “pancake domes” volcanoes. And between the volcanoes are huge, dry lava channels.

Besides being rich in carbon dioxide, the atmosphere on Venus is also filled with clouds of sulfuric acid. Overall, its atmosphere is so thick that we can only get an image of the planet’s surface using radar. The planet’s atmospheric pressure is also 95 times higher than Earth’s, making the pressure on Venus’s surface equivalent to that at a depth of about 1km underwater on Earth. So if you go to Venus and you don’t get toasted or suffocated, you’ll be squashed too.

Venus can have oceans

A few years ago, a NASA climate model suggested that Venus may have once had vast oceans of liquid water. The general idea is that the planet’s oceans were evaporated when the greenhouse effect existed. However, analysis of some basalt samples on Venus has suggested that the waterbeds are actually lava lakes.

Soil on Venus is very ‘strange’

Venus possesses the tesserae landform, a geologically complex landform consisting of trenches and ridges that appear to be mutilated. Most of its surface is exposed volcanic bedrock, some covered with thin and irregular soil layers, in stark contrast to Earth, the Moon, and Mars. Some volcanic terrain appears to be unique to Venus.

Venus has clouds that are likely to contain life

The researchers claim that they have discovered phosphine (PH3)- a gas produced by certain organisms and therefore considered biologically characteristic in the atmosphere of this planet. Those results can’t be repeated, but the story won’t really end until new probes learn more about the chemical composition of the planet’s atmosphere.