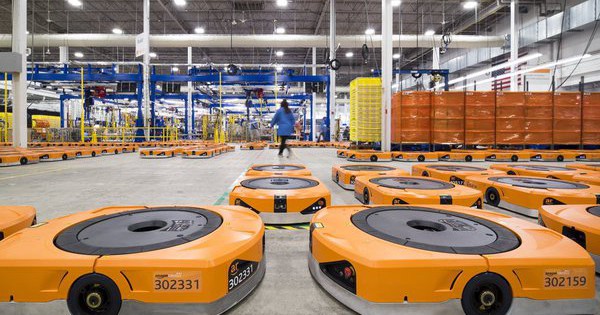 The Amazon empire is famous for applying modern machines and equipment to automate most of the jobs related to shipping and packaging orders in the warehouse. Despite having assistive technology, Amazon still has to hire people to perform other complex cases. However, recently, Amazon launched Sparrow, a new robot model capable of dominating, and changing the balance of the labor market.

Sparrow is designed to pick up miscellaneous items from shelves, sort them, and then pack them into shipping orders for customers. Previously, it was not possible to create a robot capable of sorting quickly, neatly and accurately enough like Sparrow, because each package has a different shape, texture, and material.

Sparrow filters rows based on machine learning and image recognition. Once the desired object is located, Sparrow picks up the object with a clamping device fitted with suction cups. Amazon first presented Sparrow on November 10, 2022 at the company’s robotics facility in Massachusetts. Amazon is currently testing Sparrow at its Texas facility.

The company says Sparrow can handle 65% of the more than 100 million items in stock. Tye Brady, chief technician at Amazon Robotics, said of the robot’s limitations:”The device can handle DVDs, socks and some crammed objects, but still struggles with loose or complex textured packaging.”.

Making machines capable of picking items as accurately and as quickly as humans can change the economy of the entire e-commerce industry. A number of robotics companies, including Berkshire Grey, Righthand Robotics and Locus Robotics, have developed machines that can pick up items from inventory.

The startup Covariant is building robots capable of handling “difficult” or never-before-seen items at work. In October, the International Federation of Robots reported that companies globally installed 517,385 new robots in 2021, up 31% from the same period last year and setting a new record for the industry.

In fact, robots are still not able to classify as quickly and reliably as humans. One person can usually sort 100 items per hour in the warehouse. Regarding the Saparrow robot, Brady did not disclose its speed, only saying that the robot is still in the process of “learning”.

How does Amazon invest in robots?

Over the years, robots have become more and more multitasking and useful. Although Elon Musk has introduced modern, human-like robots, it will probably be many years before these models are truly popular and useful.

On the other side of the front line, Amazon does not aggressively announce inventions, but only quietly focuses on automated robot models. To date, the company says it has produced more robots than any other company in the world. Models of “collaborative” robots are designed to be appropriate and safe to work with humans.

According to statistics, the e-commerce giant currently has more than 200,000 robots, helping to distribute nearly 350 million different products. This year, Amazon also introduced a “collaborative” robot called Proteus. Proteus is shaped like an automatic vacuum cleaner, they have the function of lifting and moving the shelves. The sensor system also allows Proteus to avoid obstacles and people while on the move.

At the event on November 10, 2022, besides Sparrow, Amazon also showed off a drone delivery model, called the MK30. The device is capable of carrying a load of up to 5 pounds (approximately 2,268 kg).

After testing in California and Texas, the representative said the new delivery aircraft models will go into service from 2024. Amazon’s modern delivery vehicles are equipped with collision warning and braking systems. automatic, device navigation and map scanning.

When automation takes place on a large scale, many people will think that the era of machines replacing humans has arrived. Economics professor Martin Fleming of the Institute of International Business Management, New York, asserts this belief is unfounded. The emerging automation revolution does not mean workers will lose their jobs, but work processes will change.

For example, if you work in sales, the algorithm can help you determine the best price to maximize profits. You will have more time to manage clients, design marketing materials or websites. Overall, according to Fleming, some jobs may disappear, but new positions will be created.

However, in environments that require production capacity, the conflict between robots and humans can be quite complex. When asked about replacing workers with robots, Brady said people are misunderstanding the role of robots. He doesn’t see it as an alternative: “Humans and machines are not confronting each other, but working together. Machines allow workers to focus on tasks that require more difficulty, that is the real achievement.”

Accordingly, as more automation systems are applied, Amazon’s business increases, and they still employ more workers. The company feels the fear of being replaced by employees, so in the event, they also honor employees who go from low to high positions.

While there’s no need to worry about “nothing to do,” employees need to be concerned about their physical energy, as their health may not be enough to handle the workload. Internal data obtained by Reveal shows that Amazon employees in automated facilities are more susceptible to injury due to the increased work tempo.