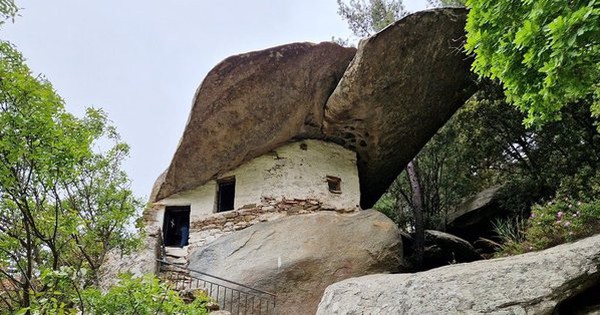 Today, the island of Ikaria is a popular tourist destination with its sandy beaches, picturesque villages and unspoiled natural landscapes.

But it was not always the peaceful and poetic abode as it is today. Hundreds of years ago, the island of Ikaria was a prime target for pirates who called the Aegean their homeland, so to protect themselves from pirate attacks, the locals started building these ‘anti-pirate’ house deep in the mountains, so that their island looks like it’s uninhabited.

At some point in the past, the entire inhabitants of the island of Ikaria had to hide themselves in these stone houses so as not to attract the attention of pirates, unless they directly set foot on the island to search. .

Historical records show that piracy has plagued Ikaria and other Aegean islands since the first century BC, but things only got worse over time. Raids on the island occurred both under Roman and Byzantine rule, and in the 14th century, after the island became part of the Republic of Genoa, piracy had worsened to the point of the population. Locals destroyed their own ports to prevent invasions. However, these are not enough, the island still has to face many attacks from pirates.

Only after Ikaria was incorporated into the Ottoman Empire did the people of Ikaria decide to take the final measures to prevent piracy. The lax Ottoman rule and law of the time paved the way for pirates to attack and raid islands like Ikaria, and the locals had little choice in how to deal with the situation, nor did they have any options. protected by the government. They are free to choose to stay on the island to face the pirates, or leave their ancestral home and move somewhere safer. However, the locals themselves chose the third option… that is to stay on the island, but move and build a new, safer place.

Called “anti-piracy houses”, these houses incorporate natural features of the island’s mountainous landscape, such as overhanging cliffs and bushes, so they become harder to detect from a distance.

“It’s a complete reversal of the kind of structure most people associate with Greece,” said Eleni Mazari, a local resident. The era of great temples is over. The Ikarians of the past built houses designed to be invisible, and to do that, they had to go high up in the wilderness, where people couldn’t see them from the sea.”

The Ikarians continued to build and live in anti-piracy houses for about three decades, a period commonly referred to as the “piracy era”. Mountain villages like Lagkada still have stone houses from that time.

To avoid attracting attention, houses are usually only one floor, lower than the rock or cliff to camouflage it, and they also do not have chimneys to prevent columns of smoke from rising. The locals mainly interact at night and avoid using fire or any light source, they don’t even keep dogs for fear that their barking will attract uninvited guests.

Interestingly, despite the hardships endured by the locals over the centuries, Ikaria is known as the Greek land of longevity, where one in three people live healthy for years. 90 years old and many become centenarians.

According to research by Dan Buettner, an American teacher and adventurer, the secret to the people of Ikaria Island having such a long life is through their diet and lifestyle.

All foods that people consume on the island are “homegrown”. Beans, peanuts, vegetables, honey and olive oil are always the top priority foods.

Meat and dairy products are not very popular. According to calculations, the amount of antioxidants in the foods here is 10 times higher than the amount in red wine.

The lifestyle of the people on the island is very healthy and simple. The people of Ikaria attach great importance to hard work. Everyone learned how to grow crops, raise livestock, and catch fish from a very early age.

Another factor that contributes to the longevity of the Ikaria islanders is the afternoon nap. Experts have proven that residents here regularly nap, so the risk of cardiovascular disease is reduced by more than 40% compared to normal cities and urban areas.

It’s one of those rare “green zones” in the world, where people often manage to outlive the rest of us by 10 years or more.