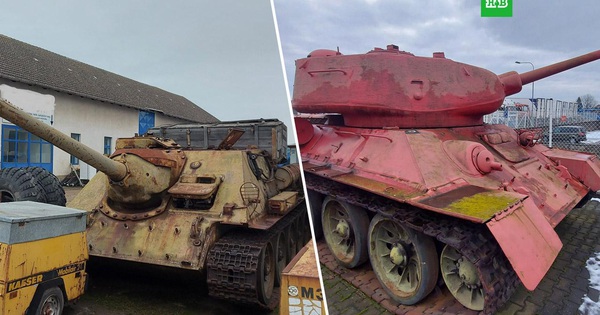 During an interview with reporters, Ms. Iva Kormosova – police spokesman for the city of Hradec Kralove (north of the Czech Republic) said someone had brought a T 34/85 tank painted pink and one SD-100 self-propelled gun to report to the authorities to be legalized ownership.

On April 7, the Czech Republic police wrote on their official Twitter page: “Earlier this year we made a video of our weapons legalization policy, in which people came to hand over tanks to the police. Nobody thought that exaggerated image came true.”

The T-34 medium tank produced by the Soviet Union from 1940 to 1958 is one of the iconic weapons of World War II. It was mainly used during the Soviet-German war (1941-1945) and was considered to play a key role in the Red Army’s victory over Nazi Germany. The T-34 has revolutionized the way tanks are designed and built in the world; although in the postwar period there were more tanks with armor and firepower than the T-34, it was still considered the most effective and most influential of the World War design. Monday. The T-34-85 is a variant equipped with an 85 mm cannon, first introduced in 1944.

Under a license issued by the Soviet Union in the 1950s, the Czech Republic (Czechoslovakia) began to produce its own variant of the self-propelled gun, called the SD-100.

Kormoshova said: “This man has legally kept the above weapons since the 1990s, but he is not sure if they have been properly deactivated or not, so he reported them to the police. Our expert has carefully examined both the tank and the cannon and came to the conclusion that both of these weapons are harmless, but they have not been properly deactivated according to current regulations. thus, they were moved from the category of “safe materials” to the category “prohibited weapons”. “

Even so, the police allowed the man to keep both the tank and the self-propelled cannon.

Kormoshova added: “These weapons are kept in a safe place by him, in addition, the owner has promised to quickly disable them in accordance with the law in the very near future. that the tank and the cannon can still be left with the master “.

Arms amnesty is regularly held in the Czech Republic to legalize undocumented weapons among the population. Ownership permits are granted only for weapons that have never been involved in an offense. This year’s program is expected to run from January to the end of July.

“Under this program people can hand over weapons they have illegally possessed to the police without explaining their origins and not being punished. Or vice versa. can claim to be formally in possession of these weapons and legally keep them ” Kormoshova explained.