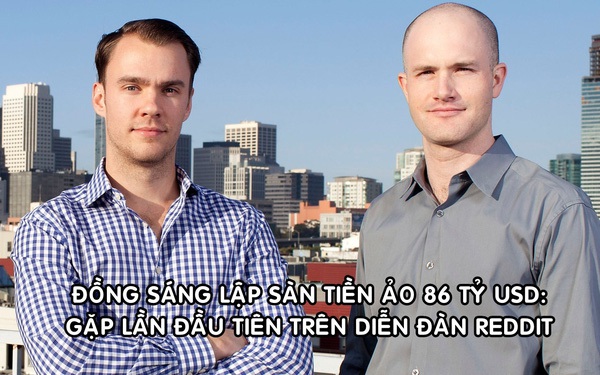 Recently, the largest virtual currency exchange in the US Coinbase was valued at $ 86 billion after its successful IPO on April 14. This is considered an important milestone in the development of Bitcoin and other digital currencies.

Coinbase founded in 2012, is headquartered in San Francisco. Coinbase currently has 56 million users worldwide (up from 43 million at the end of 2020) and an estimated net worth of $ 223 billion across the entire platform, accounting for 11.3% of total crypto market assets. . Recently, Coinbase reported estimated revenue of $ 1.8 billion and net income of $ 800 million in Q1 / 2021. Today, Bitcoin is trading at $ 62,927 per coin.

That’s at the present time, and when Brian Armstrong and Fred Ehrsam co-founded the company in 2012, “1 Bitcoin is worth $ 6 and is well known to quite a few Internet users. Bitcoin is the crazy idea that the world is. can provide digital currency for everyone “- Ehrsam wrote on Twitter April 14.

Ehrsam said he and Armstrong met for the first time on … the Reddit forum. They share an optimistic view on Bitcoin in particular and cryptocurrencies in general. They then decided to found Coinbase with a mission to make cryptocurrencies more popular and easy to use.

Coinbase started very modestly: In a two-bedroom apartment that Armstrong and Ehrsam shared with another company. In their first 2 years in business, they have grown into a company with more than 1,000 employees. However, from 2014 to 2017, Coinbase faced serious hardship as the world assumed that digital currencies were “dead”.

Most typical is in 2017, after rising to nearly 20,000 USD / VND, Bitcoin price has plunged and decreased by 1/3 in value in just 1 day. Or in 2018, the price of this virtual currency fell to as low as $ 3,122. That caused the digital currency market to be blown away by billions of dollars in value.

Ehrsam says more than a third of Coinbase employees have left. Even so, the company continued to grow. In 2017, he left Coinbase but remains a board member and owns about 6% of the company’s stock.

Although some investors call the Coinbase IPO a “major turning point” for digital currencies, there are experts who note possible risks including Bitcoin’s price volatility and its government regulations.

Looking back on his journey, Ehrsam said he is not only proud of Coinbase but also of the growth of the digital currency. “Today, almost 10 years since we founded Coinbase, digital currency has become a vast ecosystem that has a definite influence on the global financial system. A lot of institutions,” he said. Banks, asset managers, fintech companies, and even non-financial services companies have begun to embrace digital currencies more widely. I am very pleased with this. “

According to Forbes magazine, Ehrsam currently owns a fortune of $ 1.9 billion.