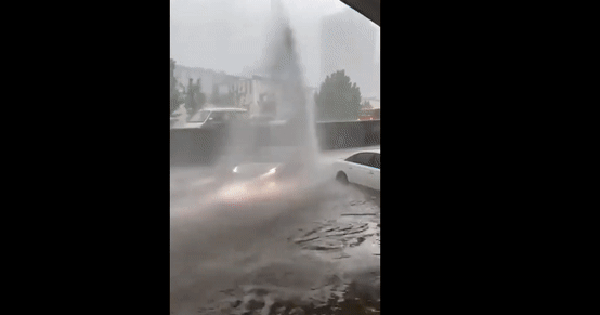 China is experiencing a terrifying natural disaster, as heavy rains pour down the area of ​​Henan province. The flooded roads became rivers, travel was extremely difficult, most of the vehicles stalled.

But also during this time, many actual videos of electric cars that “transformed” into electric boats were continuously born, causing a stir in the online community of this country.

In bad weather, when there is no other choice, electric cars can turn into electric boats.

Prominent among them is a video recording a car owner in Zhengzhou, driving a Tesla Model 3, dashing through ice in deep water that has gone viral. The video shows that the water has almost overflowed the bonnet, but the owner still bravely drives it forward.

But Tesla isn’t the only electric car to do that.

A tram owner is moving on a flooded road.

Some other videos and photos shared show that domestic electric cars of Weilai, BYD can also move, even though the water has risen to the level of the window glass. The images show that the screen on the car shows a capacity of 49-51kw, which means that the engine still maintains nearly 70 horsepower to “push” the car forward. There are times when water shoots straight out the entire car window, the owner of the car can only see the wiper in sight.

“This is not a car, this is a submarine,” One netizen commented. Many also nicknamed them “the new generation of submarines”.

Why can electric cars do this?

As most people think, extreme caution should be exercised when driving through wetlands. As for the deep water area, where cars always have to avoid. However, during the heavy rain in Ha Nam, many electric vehicles turned into “electric boats” and dashed along the roads like rivers.

In fact, for conventional fuel-powered vehicles, deep waters are a no-go. Because their power source is the internal combustion engine. When the engine is running, the mixture of gasoline and air is burned in the combustion chamber of the engine, the energy generated will drive the piston to move, thereby making the crankshaft rotate to generate mechanical energy to provide energy. for fuel-powered vehicles.

Imagine a person who can’t swim suddenly falls into a river, water will enter the respiratory tract from the nostrils and into the lungs, causing suffocation. And when the car goes into deep water, it will also “submerge” in it, because water from the outside will enter the engine through the car’s “nose” which is the air intake. When a large amount of water enters the combustion chamber, the spark plug may not ignite the mixture of gasoline and air. But the piston still performs “charge” and “compression” cycles, the oil and gas mixture is compressed with water. The resulting pressure will burst the intake and exhaust valves, and the valve connecting rods and many other components will be deformed and peeled.

Going into deep water, the owner of a fuel-powered vehicle can only leave his belongings behind.

Even if the engine doesn’t have any major problems, just water infiltrating the engine will inevitably produce rust and corrosion, seriously affecting its service life. This is also the reason why cars that used to be submerged in water, also known as water hammers, on the used car market are never popular.

But electric cars are different.

The kinetic energy of an electric car comes from the electric motor, and the power supply comes from the electric battery. There is no hard mechanical connection between the two devices, but instead, they are connected through a system of electrical circuits and do not require air for support. Therefore, the engine and battery operate in a completely sealed state, so short wading is not a problem.

In other words, as long as the powertrain of an electric vehicle is well waterproofed to ensure that the battery, motor, and cables are not penetrated by water in case of wading, there will be no stalling in the middle of the road. .

Internal structure of an electric vehicle.

Therefore, to ensure the safety of electric vehicles when wading, the most important thing is to do a good job of waterproofing. And this is also something that all manufacturers pay special attention to when developing and designing products.

Because it is the same as the standard for waterproof and dustproof safety for electronic components. For electric car companies such as Tesla, or BYD and Xiaopeng in China, components of the high-voltage circuitry and power batteries must meet IP67 water and dustproof standards.

In addition, they must meet various standards for wading capabilities in real-life situations. For example, a national standard test in China requires an electric vehicle to be able to safely travel a distance of 500 meters at a speed of 20km/h in 10cm of water with a wading time of 1, 5 minutes.

The private standards in some localities such as Beijing and Shanghai are even stricter, the requirement for wading depth is basically 20 to 30cm.

So, do electric car companies know that their vehicles can be used as “submarines”?

Regarding the official statement, no one has made any statement, except Elon Musk, CEO of Tesla. In the past, Musk has expressed personal views about his company’s Model S product, that it can walk on water, with spinning wheels that help propel the car forward. Or, at the very least, drive through wetlands for short periods of time.

He also shared the story of a Model S driver in Kazakhstan who successfully drove through a flooded tunnel. But the CEO stressed that it shouldn’t be forced to do so.

And Tesla owners should also be aware that in the event of a vehicle malfunction, the company’s warranty team can still refuse to assist on the grounds that the vehicle owner has used the vehicle improperly.