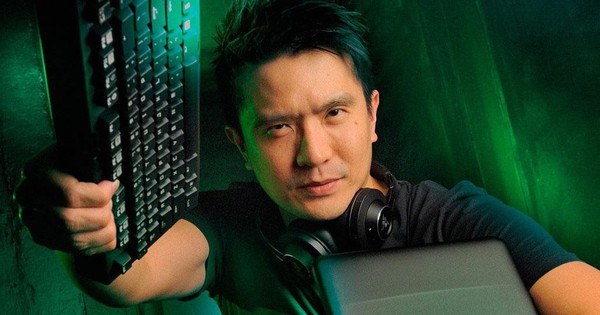 Born into a traditional Asian family, Min-Liang Tan (November 5, 1977) was destined to become a lawyer by his parents. “My mother told me that I’d better become a doctor or a lawyer. Because I have an older sister who is a doctor, another sister who is a lawyer, and a brother who is also a highly respected clinical specialist. He is very smart. I also studied law. My parents always wanted me to become a lawyer. Therefore, my family will have 2 doctors and 2 lawyers. That’s ideal, isn’t it?“, CEO Min-Liang Tan told CNBC.

Therefore, he did not dare to tell his parents when he started his business in the field of manufacturing gaming components. “I’m going to start Razer. If my parents found out, even though they might not be happy when I decided to change careers on my own, I believe they would still support me.“, said Tan.

Dropped out of law school because of his passion for games, founded Razer

Gaming has always been this guy’s passion. “Like any other game-addicted kid, I hugged the computer all day, playing computer games whenever I could. Even my parents scolded me many times because I played games too much. But I feel very happy, my passion for the game is unchanging“, the CEO confided.

The first friend to play the game with Tan was his brother Min-Han Tan. They played games from the 1980s like “Prince of Persia” and “Castle Wolfenstein” and had to use ice to cool the computer for fear their parents would find out. However, unlike his brother who was a doctor, Min-Liang Tan soon revealed his talent in the business field.

“During my high school years, on Valentine’s Day, my brother brought a ton of roses to school. Min-Liang Tan bought flowers from a supplier at a very cheap price and sold everything back to the school at a higher price. It even set up its own social networking site, accessing events and trade shows for business purposes.“, brother Min-Han Tan shared about his stubborn brother who refused to follow the legal career as the family’s wishes.

His interest in gaming along with his passion for business lasted until Tan studied law at the National University of Singapore. In 1998, Tan met co-founder Robert Krakoff (then in his 60s) while playing the first-person shooter Quake. A year later, the two of them created the world’s first gaming mouse. It helped them play so well that they were banned from the game server on suspicion of cheating.

In 2005, Min-Liang Tan dropped out of school. He and Robert Krakoff built a company specializing in gaming equipment called Razer. They are based in Singapore and San Diego, California.

Right from the launch of the first product, the Diamondback mouse, Razer has gained a great reputation in the e-sports industry market. This has become a springboard for Razer’s rapid growth, attracting the attention of prominent investors, including Hong Kong billionaire Li Ka-Shing and chairman Koh Boon Hwee, the company’s co-founder. Credence Partners.

In 2017, Tan chose to list company shares in Hong Kong (China) instead of Singapore. As a result, he raised more than 500 million USD and this made Tan one of the richest self-made Singaporeans at the age of 40.

Make Razer an “empire” in the field of esports

As a gamer, Tan understands what a gamer needs and wants. It is the interest in consumers that has helped Min-Liang Tan gain fans. Matthew Haag, former professional gamer of esports said: “Tan’s passion, you can’t ignore it. I mean, he’s the leader of the whole company but also someone who really loves the products he makes, he understands what gamers need and wants to bring them products. best product“.

“When it comes to gaming, many people often think that the target audience is teenagers living in the basement with their parents, playing games all day, not taking care of themselves. But you know, now about half of gamers are female. The age of game players has also changed, there are old gamers and there are also young gamers.

Because today, gaming is really a unique form of entertainment that is easily accessible to everyone. From smartphones, tablets to PCs“, CEO Min-Liang Tan evaluates the goal and object of development.

Therefore, Tan is actively involved in the design of Razer products. It can be mentioned that Tan chose pink for the Razer Quartz line aimed at female gamers. Razer CEO also manually redesigned the “green snake” sticker in great detail.

Furthermore, Tan said he will focus on growing Razer from a hardware manufacturer into an ecosystem for gamers by launching many products labeled “green snake”.

Min-liang Tan’s ambition is not only in the field of research on the gaming world, but the billionaire also wants to make Razer one of the largest entertainment brands in the world. “I don’t think it’s risky or brave. Currently, we are the world’s biggest game brand, can we become the biggest entertainment brand? What awaits us ahead? It’s a sense of challenge and adventure to do great things“, said Tan.

To be more precise, Min-Liang Tan hates the early morning routine that Apple CEO Tim Cook and former CEO of Twitter enjoy but goes to the gym, yoga or jogging and meditation.

Of course, like every other office worker, Min-Liang Tan wakes up at 8 a.m., checks his email, and goes to work. At noon, this CEO eats at work. For most of the 10 years, Tan ate the same noodles or sandwiches from shops near his offices in Singapore and the US.

According to Edwin Chan, Tan’s childhood friend and Razer’s CFO, one of the things that keeps the CEO so popular with fans is that he’s still passionate about gaming and brings a sense of belonging. of a gamer, not a billionaire. Because of his admiration, many fans also tattooed the logo of 3 snakes or the image of Min-Liang Tan on their body.

One thing Tan and other tech CEOs have in common is simplicity. In 2014, when Tan met Singaporean General Tony Tan Keng Yam at the time, he still appeared in his signature black t-shirt and jeans.

According to CNBC, SCMP