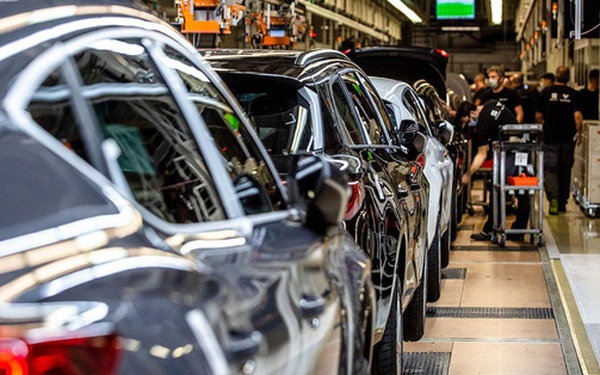 “We might be seeing the best new car market ever. But we don’t even have cars to sell,” said David Kelleher, a car salesman in Philadelphia. After recording the best months of sales in March and April, he started the new season with only 98 cars, when normally 700 cars must be in stock.

Automakers have been forced to cut production of more than 1.2 million vehicles in North America, according to estimates by research firm AutoForecast Solutions, because they don’t have enough chips to power everything from safety systems. whole, to the brakes and the engine. This has turned the cars into “useless plastic piles”.

Research firm Wards Intelligence estimates that U.S. dealerships currently have less than 2 million vehicles in stock or are on track to arrive by the end of April. This number is just under half of what it was at the time of the announcement. and is the lowest level in the past 3 decades.

Chipmakers are expected to spend billions of dollars on new production, and the White House has also prioritized increasing domestic chip production. However, the construction of factories in the country will take many years. Many executives in the auto-manufacturing sector are forecasting shortages that will affect their businesses throughout the period from now to the end of the year.

Currently, chip shortages have disrupted production at dozens of auto plants across the US, even forcing many factories to close for months.

Automakers are having to assemble vehicles without semiconductors. Therefore, they had to leave the car in place until the chip was installed. Tens of thousands of such vehicles are parked on vacant land at airports, quarries, racetracks and ranches near assembly plants in the South and Midwest. At the end of March, Ford had about 20,000 cars parked in areas near the factory to wait for chips.

The timing of the chip shortage is made worse as buyers are about to use savings and government support to buy cars. Automakers recorded their highest-ever sales in March and April. According to research firm JD Power, increased demand has pushed the average price for a new vehicle to $37,572. in April, up nearly 7% from a year earlier and the highest in the month.

To address inventory shortages, some auto companies are removing some features that require chips. Stellantis NV shipped some Ram pickups to dealers without automatic blind-spot detection, Kelleher said. He shared, 1 buyer was very upset when the $ 60,000 car lacked this feature.

Meanwhile, the scarcity situation is putting more strain on the used car market, which has become hotter in recent times. Car dealers are trying to convince customers to exchange used cars for new cars to increase inventory.

According to auction site Manheim, a used pickup truck sold for 78% more in April than a comparable one a year ago.

This will be an opportunity for car owners like Zerin Dube. Recently, he considered replacing his Jeep Wrangler. He found used car retailers Carvana and Vroom were willing to pay a little more than the $50,000 he paid three years ago. However, the problem is finding a new car.

“Actually, this is not the right time to buy a car,” said Dube, director of an IT company in Houston. Therefore, he decided to keep the Jeep.

In addition, the lack of chips also forced factory workers to stay at home, watching bills “pile up” when trying to find unemployment support offices. One of them is Danyelle Anderson – a single mother of four children who has worked at Ford’s assembly plant in Chicago for three years.

She applied for the subsidy after the Explorer assembly line stopped working on April 12. Anderson and other workers said it took several weeks for them to receive their first payments.

Anderson shared that the delay caused her to not be able to pay her rent in time, and her car and cell phone service were also cut off due to debt. She hopes to receive the money this week and has to keep the car in the garage, fearing it will be repossessed because she owes bills.

For smaller companies that make products for vehicle assembly plants, chip shortages have affected orders. A few months ago, they had to work overtime to make up for lost output during the pandemic.

Ford installed mini-lights in the rearview mirrors of Explorers at its Chicago plant, manufactured by Eypex. Around the beginning of the year, orders were so high that Eypex president Clarence Martin also had to pack shipments with employees.

US auto market “falls to hell”

Claude Burns, the owner of a car dealership, said he desperately needed a car to sell and even recently had to turn down some customers to focus on repairing old cars and putting them in the parking lot to sell to customers. “I think the auto market will hit the bottom of hell in mid-June when the new car inventory runs out,” Burns said.

Meanwhile, Justin Bates (42) ordered a GMC Sierra pickup 4 months ago. However, he still does not know when he will receive the car and is considering giving up. “I was extremely angry,” Bates said.

EEI Global Inc., a marketing company that offers test-drives of new vehicles at events such as races and level fairs, asked an automaker to cancel a $1 million contract this week. because of out-of-stock, Derek Gentile, the company’s chief executive officer, said angrily: “They can’t make the cars advertised. Why are they talking about things that don’t even have stock for sale?”

A General Motors plant near Kansas City has been closed since February, while the supply of chips has been mixed. In stock of the Cadillac XT model, there were only 2,000 units left across the US in April, a third less than usual and priced above the list price of $ 5,000.

Andrew Arwood drove over an hour to buy a Subaru Crosstrek sport utility vehicle. When he arrived at the store, the employee said the car was out of stock. Arwood reached out to other dealers, but the staff wouldn’t allow a test drive if he didn’t have the cash and a qualifying loan. “Cars are protected but made of pure gold,” Arwood said.