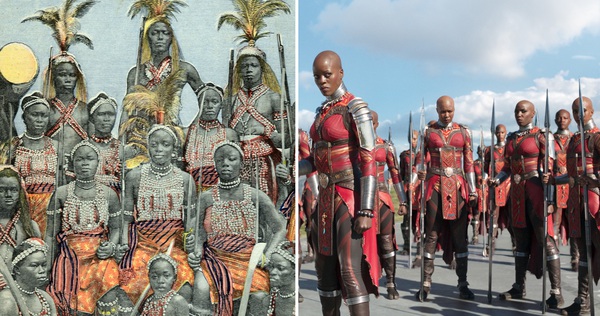 It seems that only in the superhero movies of the MCU, but these female warriors are completely real, they are Dahomey soldiers – brave female warriors and often called Dahomey Amazons. Their descendants today currently live in a small village in the Republic of Benin, West Africa.

But in the past, the kingdom of Dahomey once ruled a very large area in West Africa, this country was built on the power of wars and slavery. They had a huge army and had international trade relations with the Europeans.

But Queen Hangbe was a warrior, so she directly led and recruited an all-female army during her reign (which can last from 3 months to 3 years) from then on. founded the Dahomey Warrior Women’s Team.

The Dahomey female warriors were soldiers in the army of the Kingdom of Dahomey, a West African empire that existed between 1625-1894. The remnants of this empire today lie in Benin, the country that spans the coast between Nigeria and Togo.

There is also another story about the origin of these female warriors and perhaps also the most common and reasonable explanation, the Dahomey female warriors were founded to protect their own kingdom.

Everything started when the war between Dahomey and Yoruba broke out. Since there was no advantage in the number of soldiers (during this time, the increase of the slave trade to Europe, the country was short of men) the king of Dahomey was forced to recruit men. Women join their army for the purpose of defending the kingdom.

By the middle of the 19th century, these women warriors made up 40% of the Dahomey warriors, and the selection of these women warriors was also very strict. They must pass all kinds of tests from physical to mental – either fight or die. Discipline and intense training have turned these female warriors into true war machines.

Throughout history, we have seen women holding important and powerful positions such as Queen Nzinga of Angola (1583-1663), Queen Elizabeth I of England (1533-1603). …

But in reality, an army of female warriors is extremely rare. The historical records of the female Amazon warrior as the world is known are mostly inaccurate and greatly exaggerated. However, European slave traders, missionaries, and field administrators have recorded the times they faced this female warrior as terrifying.

And it’s also hard not to notice the similarities and inspirations of the female Dahomey warriors to the Dora Milaje army featured in the comics and in Wakanda-related movies in the MCU.

The Dahomey people worship the creator according to the principle of the dual universe – Mawu is female and Lisa is male. They believe that their universe can only function effectively when both men and women work together equally. This religious establishment was maintained both politically and militarily of the kingdom of Dahomey. These characteristics are also present and prominent in Wakanda’s Dora Milaje army.

So what happened to the kingdom of Dahomey?

At the end of the 19th century, the kingdom of Dahomey had to fight the French – who were racing with other European countries for a slice of the pie in the process of colonizing Africa.

Although the French soldiers died a lot due to underestimating the bravery of the army of Dahomey Amazons, but the kingdom of Dahomey finally succumbed to the army of the French because they possessed modern and powerful weapons. greater damage.

In a fierce battle with the French, more than 400 female Dahomey warriors risked their lives to protect their kingdom, but only 17 survived.

However, even after the female warriors of Dahomey fell to the French, the survivors continued to fight. They hid in the ranks of indigenous women captured by the French, looking for opportunities to attack the French. They assassinated French officers at night.

Many sources claim that the last female warrior of Dahomey named Nawi was discovered living in a remote village and died at the age of 100 in 1979. But one thing is for sure, the Dahomey female warriors were completely female. In existence, they are fearless, fearless warriors, merciless people and respected defenders of the kingdom.