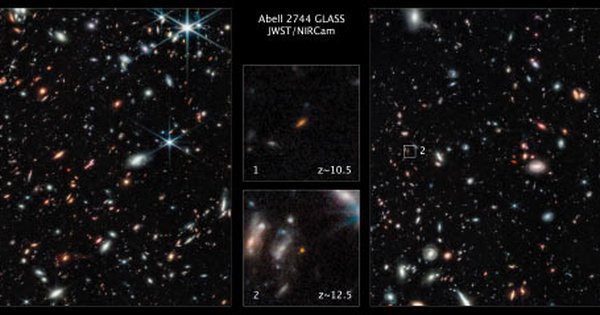 Follow Sci-News, those are two ancient galaxies named GLASS-z12 and GLASS-z10, recorded from two observation programs targeting the oldest part of the universe, GLASS-JWST and CEERS.

They are located in an area known as the Hubble Frontier Fields Abell 2744 cluster, a group of about 500 ancient galaxies also nicknamed “Pandora’s Box” because it has long been identified as a repository of time mysteries. “infancy” of the universe, from preliminary data recorded by NASA’s Hubble space telescope.

The spectacular image that NASA released, recording two interesting objects, are the most galaxies ever found – Photo: NASA

In the new observational missions, the scientists used much more detailed data sets from the James Webb super telescope, the most powerful space telescope currently operated by NASA and supported by NASA. by ESA and CSA (European and Canadian space agency).

Representing the James Webb team at NASA during a press conference just held, astronomer Garth Illingworth from the University of California at Santa Cruz released an image showing countless galaxies scattered across space, in The two ancient galaxies mentioned above appear clearly.

Follow Space, The world’s leading ground-based telescope ALMA has been mobilized to peer deeply into two newly discovered James Webb objects. ALMA’s radio data helped determine which were the galaxies and were exactly as old as claimed.

The above cluster of galaxies is about 4 billion light-years from us, which means we are seeing them not only through distant space but also beyond 4 billion years of time: A younger image of 4 billion years ago. , because light takes that much time to “land” on Earth.

According to Dr. Illingworth, finding these galaxies has paved the way for a “new game”, bringing scientists closer to confirming the long-standing hypothesis that the first stars were born after the Crash. The Big Bang gave birth to the universe only 200 million years ago, 13.6 billion years ago.

Details of the findings have been described in two scientific papers, published in The Astrophysical Journal Letters November 17 and 18.