The Bitcoin market continued to show relative weakness in both price and on-chain activity for the 25th week. The price has been trading within a consolidating bottom range recently, marking a drop from $41,295 to the low. as low as 33,818 USD at the end of the week.

Significantly low on-chain activity with both Bitcoin and Ethereum. However, while low trading demand is a bearish statement, it also reflects the unease of those looking to sell at these prices. Are they waiting for a relief rally in the near term?

At the same time, a shift is underway in China’s mining markets as many regions enforce bans on the industry. This week, we’ll explore the observable on-chain impact of both changes in hash function and miner spending behavior.

This is what is being seen above the chain.

Both Bitcoin and Ethereum have experienced a significant slowdown in on-chain activity with active addresses and total transfer volumes dropping back to 2020 and early 2021 levels. down 24% from its regularly maintained high in recent months of 1.16 million from March to early May. Current activity level of 884k active addresses was last seen at this time. last year.

For Ethereum, the drop in active addresses was even bigger, down 30% from the peak of 676k addresses. Activity is now down to 474k addresses/day, last seen in Q1 2021. 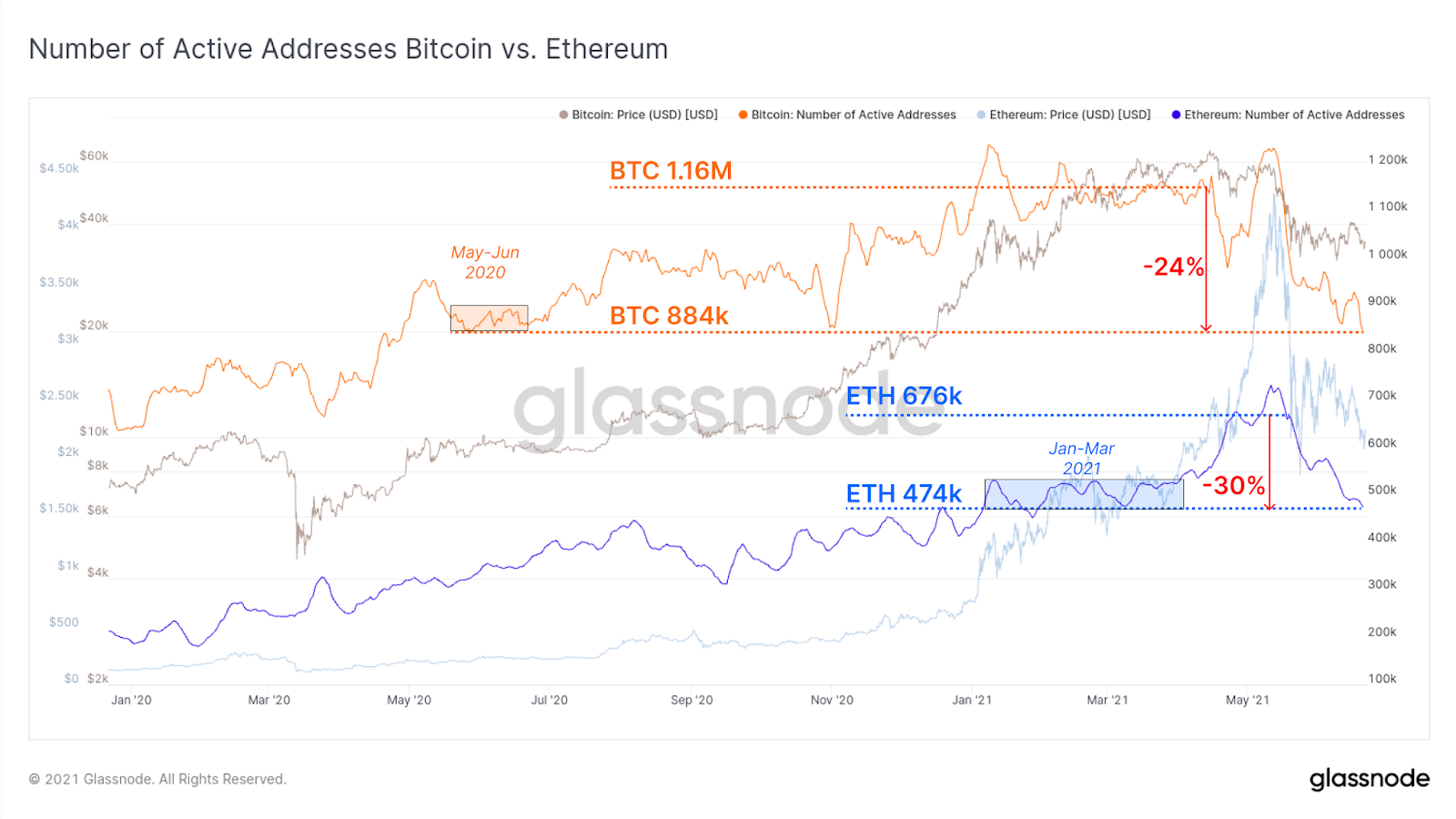 When it comes to the value of USD being paid out across networks, the drop in activity is even more severe. Both Bitcoin and Ethereum are down -63% and -68% in USD value respectively, compared to recent highs set in May. 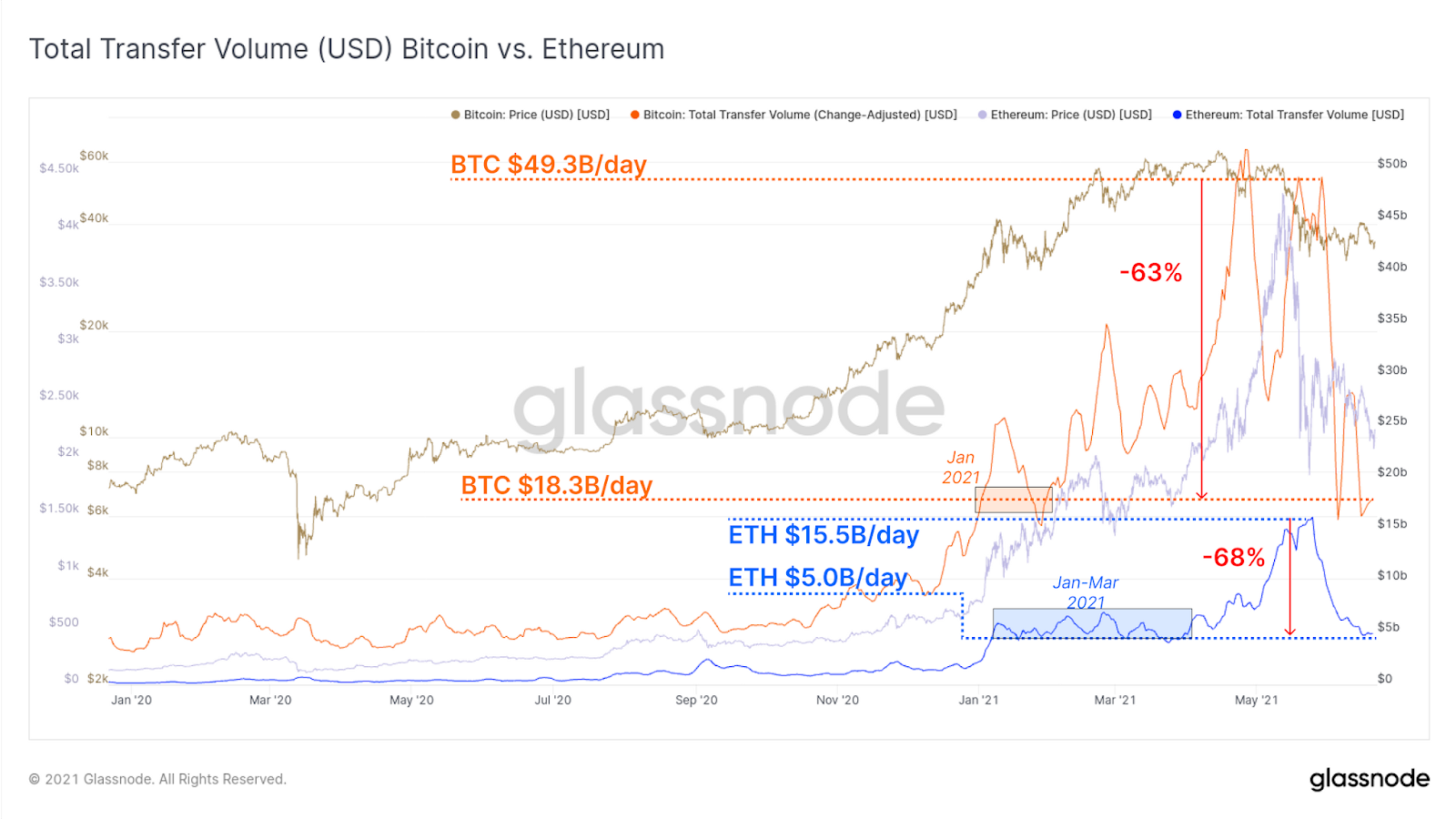 Naturally, the priority fee for inclusion in the next block has decreased significantly as the network congestion is almost completely removed. Bitcoin’s total fees have dropped to just under 30 BTC/day (~$1.2 million), coinciding with levels in late 2019 and early 2020. This number now represents about 4% of miner revenue. . 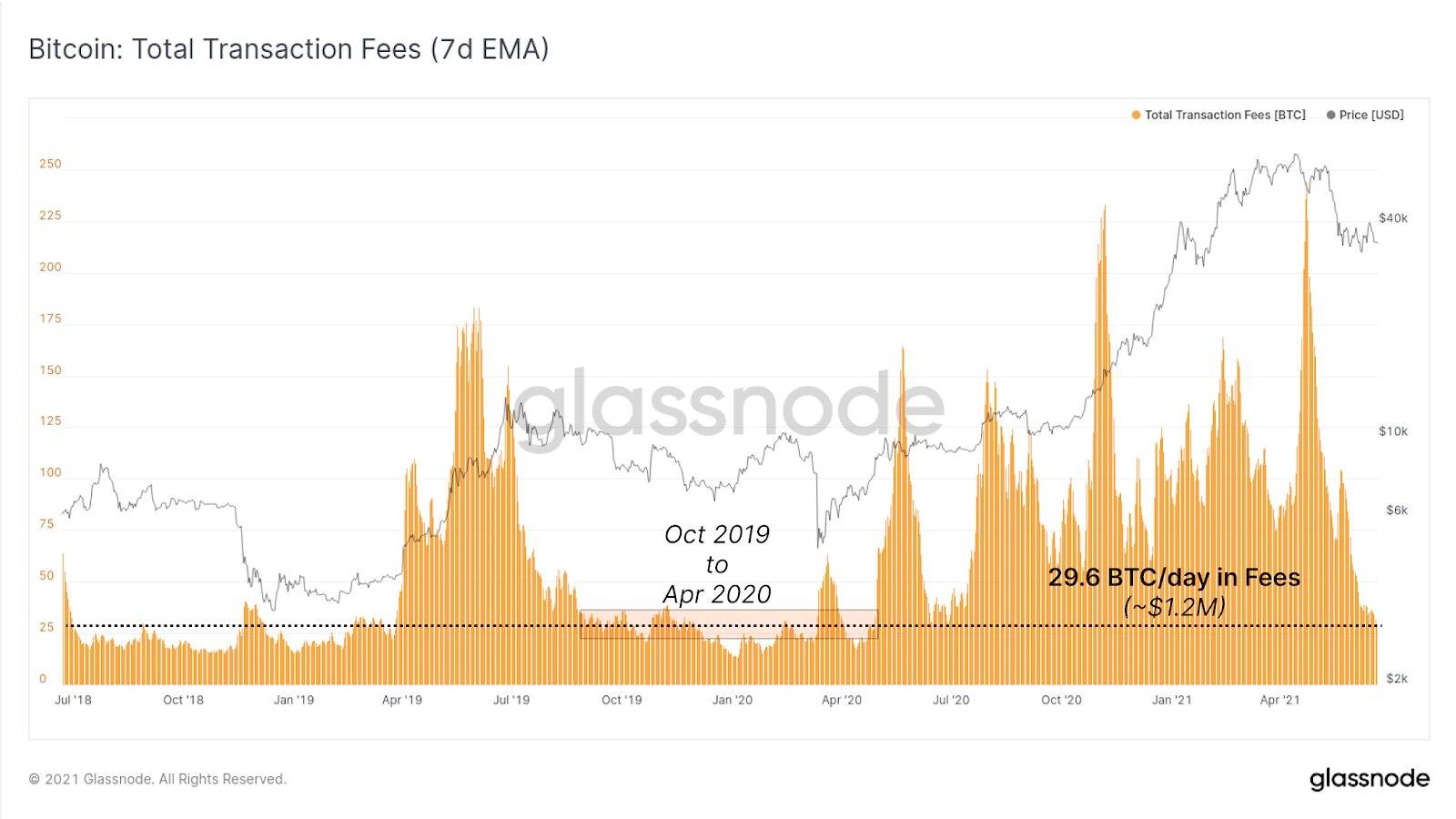 For Ethereum, daily fee revenue has dropped from over 15k ETH/day in early May to just 1.9k ($4.34 million). This number represents about 10% of a miner’s total revenue derived from transaction fees. We can see that this roughly corresponds to June 2020, before “DeFi Summer”. 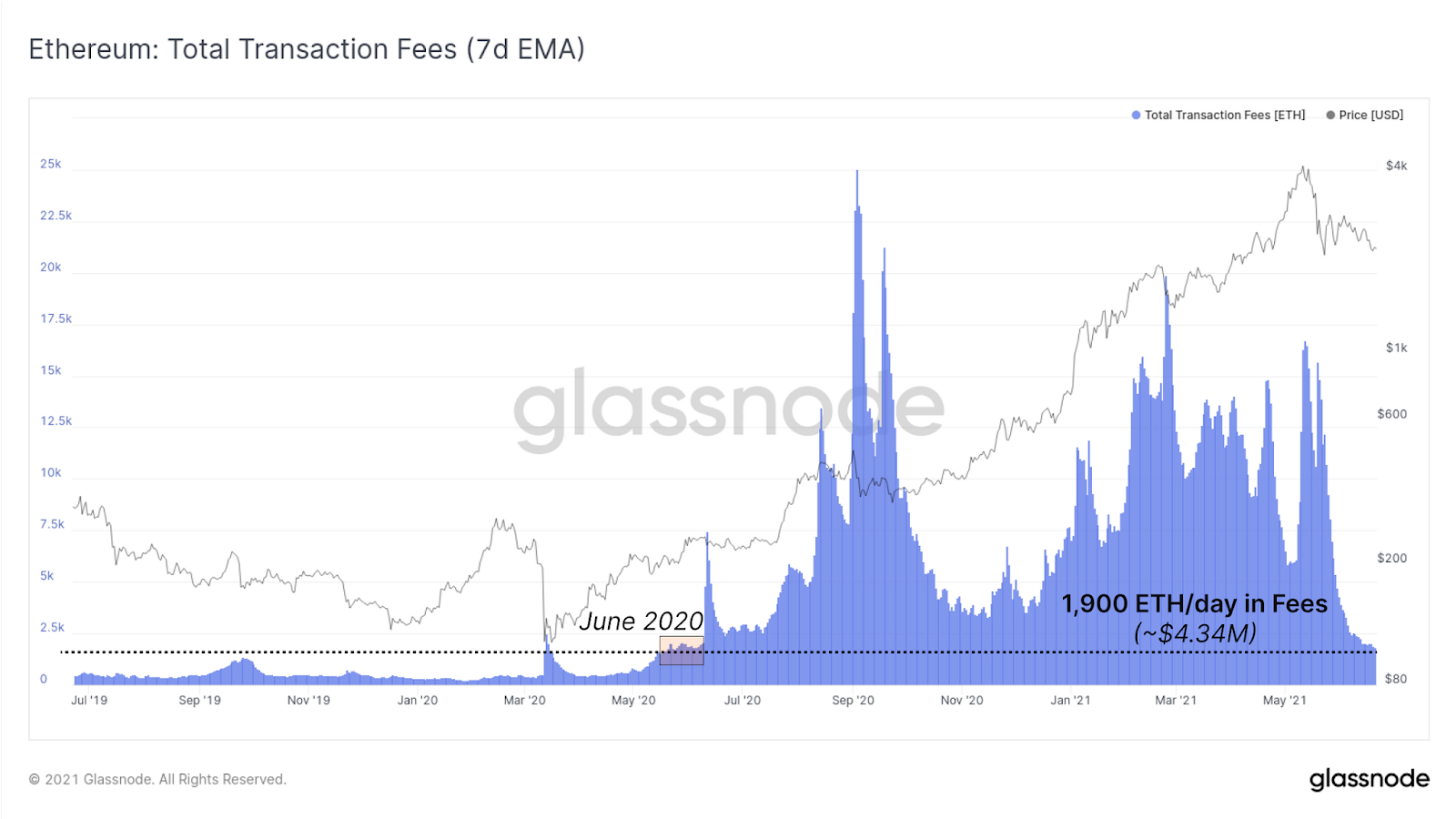 From a macro perspective, there are notable similarities with the 2017 macro peak, which is related to the balance of supply held by Long Term Holders (blue) and Short Term Holders (red). The chart below shows the relative supply held by each pool and whether they are making a profit (dark color) or a loss (light color).

After reaching the ‘HODL Peak’, both cycles represent a macro distribution event, as BTC wealth is transferred from Long term Holders to Short term Holders. After the top was established, we started to see the opposite effect, as long-term holders stopped spending and started accumulating again, even though their coins often fell into unrealized losses. Okay.

Since the $64K peak, long-term holders own an additional 5.25% of the circulating supply, of which 1.5% of this supply is currently underwater (held at unrealized losses). Although price is approaching the cost base for many long-term holders, they continue to HODL. 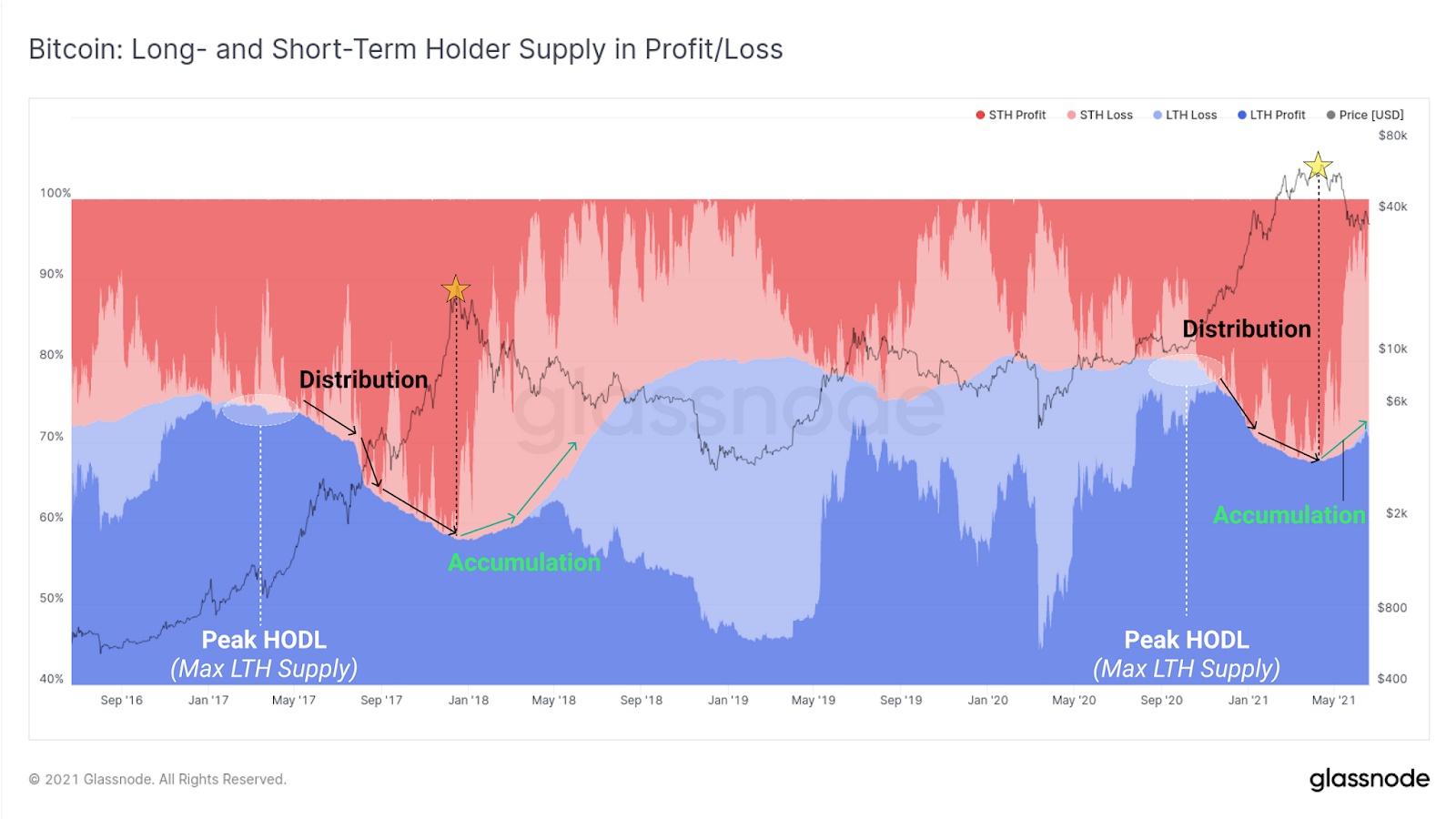 If we investigate aggregate spending behavior over the last year, we will see that the percentage of young coins (those less than 1 year old, excluding < 1 day) are moving up in proportion to of the transaction stream. Over the past few months, we have seen younger coins account for more than 45% of all transactions. This is most likely the result of new entrants to the market:

What this metric shows is that most of the current on-chain activity is due to buyers over the last 6 months spending their money and taking on a loss. 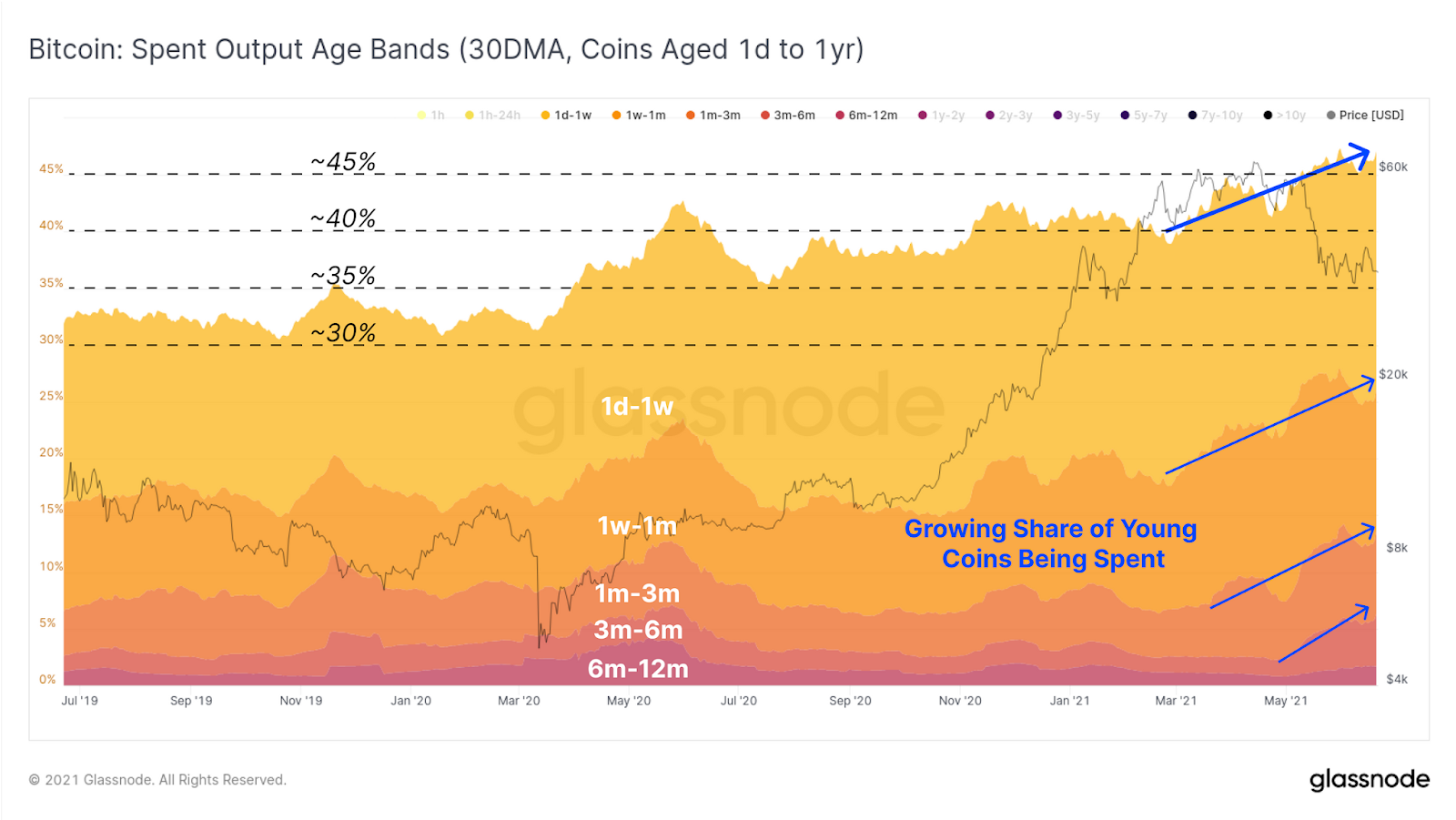 In contrast, older coins (those > 1y) have reduced their spending, with a significant drop after the May sell-off. This proves the fact that the two sides of mempools are empty:

Spent age bands are an especially useful tool to have on hand if the market experiences a strong rally or invests more. A key behavior to watch out for is in an instance where these old coins bounce back to a rousing state, such as during a relief rally. If so, it could indicate that older investors are exiting at that level of liquidity or panic selling (bearish). If not, and their coin is inactive during times of volatility, that would be a strong sign that confidence is still in the (bullish) game. 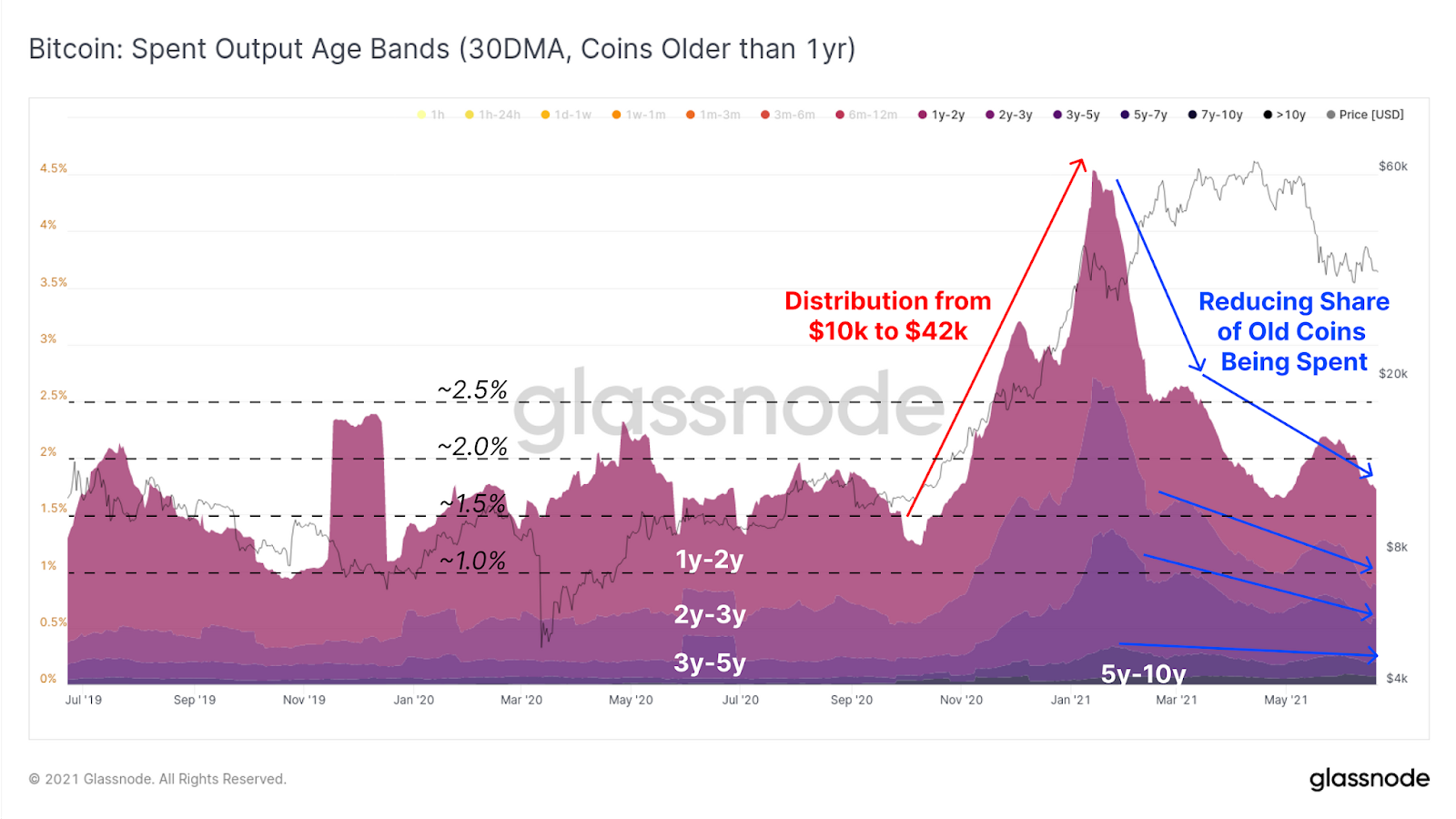 To confirm the importance of spending behavior across all coins, we can look at the binary CDD index with a 7-day moving average applied. This metric tends to be higher when the daily volume of coins destroyed is greater than the long-term average. More coins will be destroyed when older coins or large amounts of BTC are moved on-chain.

Binary CDD has dropped to such lows that 1 in every 7 days is destroyed above the long term average. This state of affairs lasted for most of June and started relatively quickly after the sell-off in May showed that former holders were reluctant to sell at these prices. It also highlights how little demand on the blockchain space is.

The entire market seems to be waiting for the next move, and very few are willing to make the first move. Whichever way this breaks, the directional reaction of these longevity indicators will provide valuable insight into market trends. It will show whether old holders are spending their illiquid coins and hence using any chance to get out or stay there. 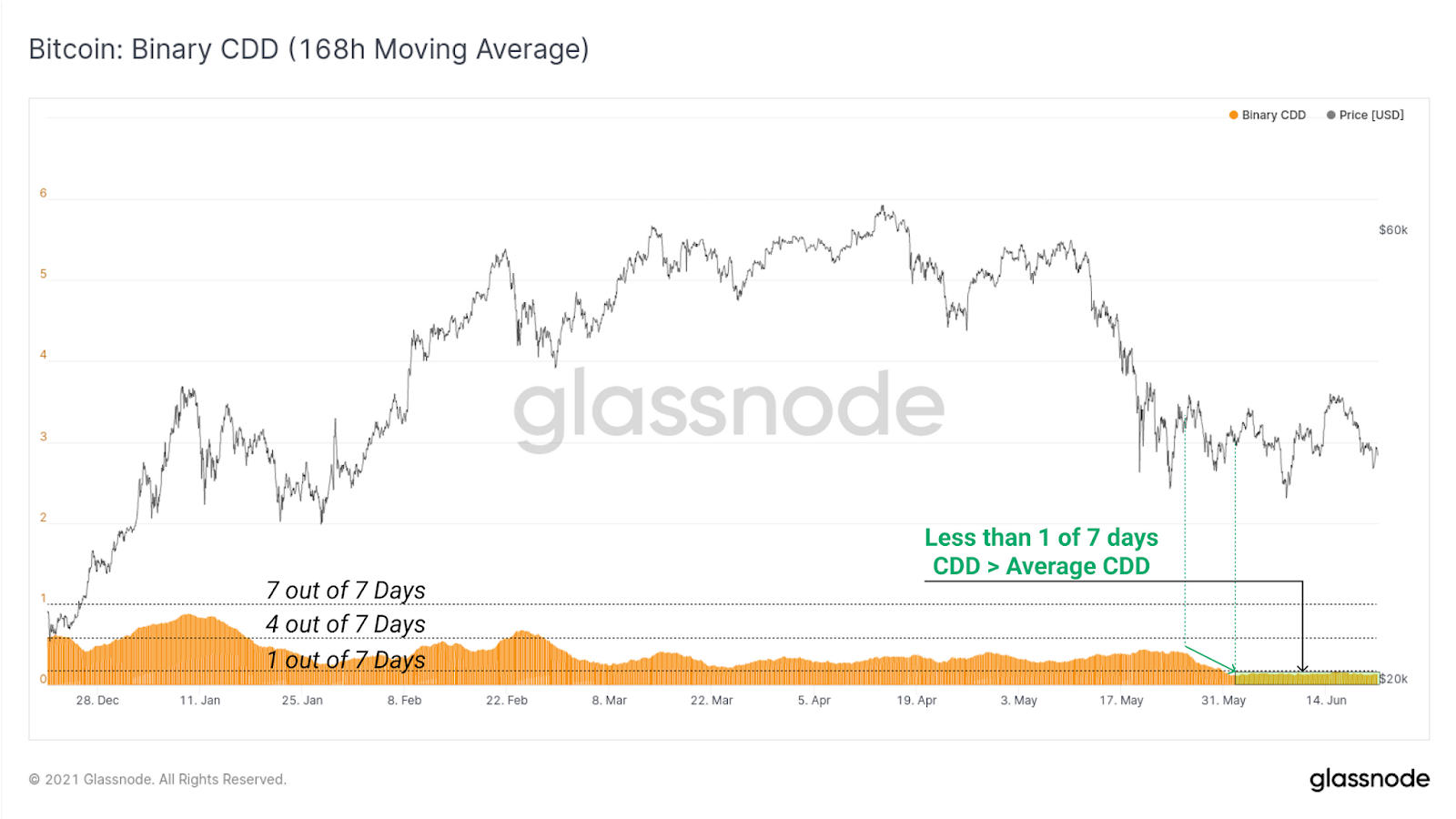 One of the biggest moves in history in Bitcoin’s hash power appears to be underway. Following the official ban on mining activities in several Chinese provinces, many miners are in the process of shutting down or moving their hash-power beyond China’s borders.

Over the past two weeks, the estimated average hash rate (7DMA) has dropped by about 16%, falling from around 155 EH/s to around 125 EH/s. Hash power is now back to levels maintained throughout mid-2020. 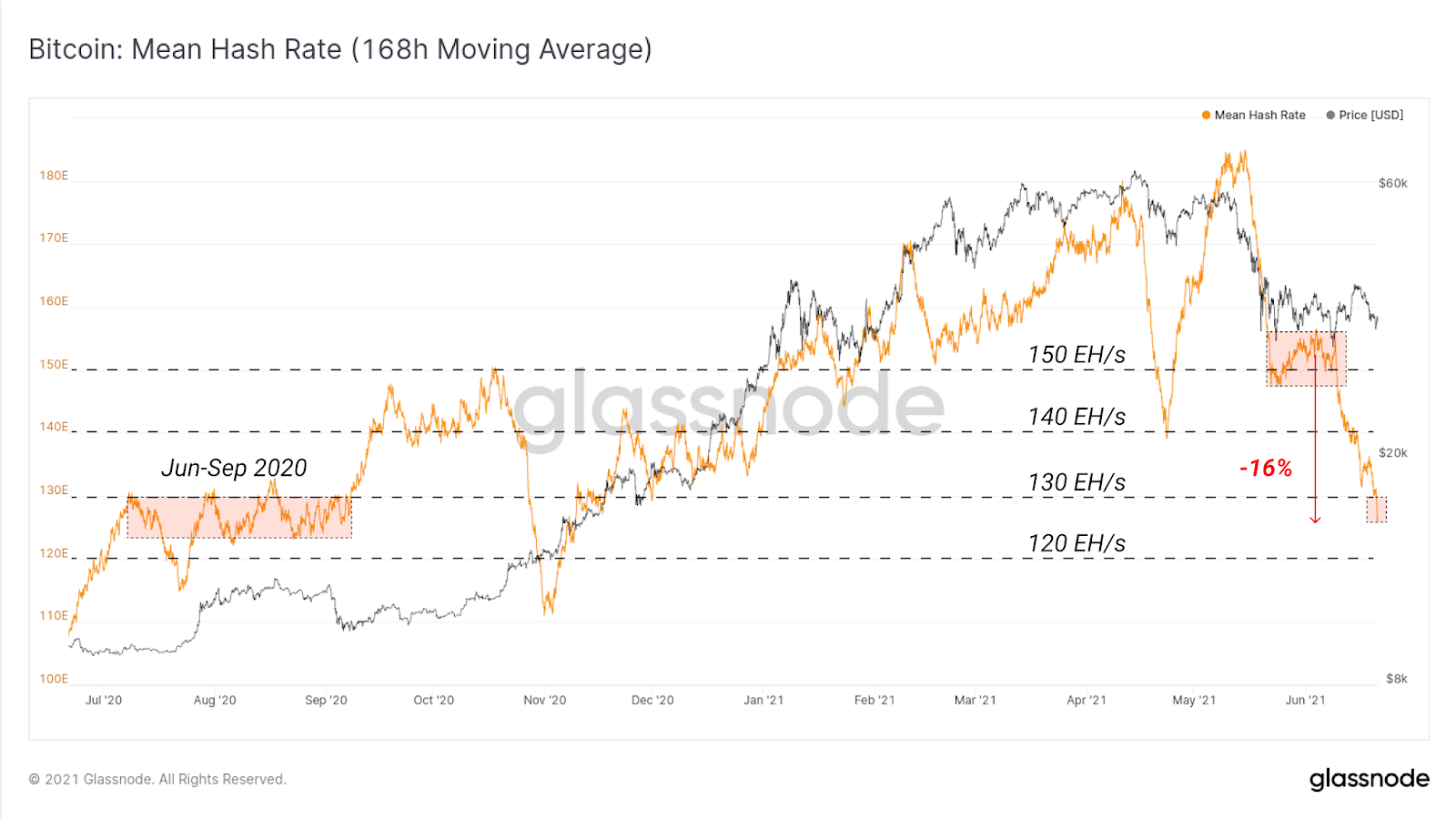 As China’s mining industry faces the logistical challenges of relocating, moving or selling their hardware and facilities, some of them will likely be partially liquidated. their pre-accumulated BTC treasury. These sales may represent miners hedging hedging, obtaining capital to facilitate and finance logistics, or for some other miners it may be a way to exit the industry.

The Miners Net Position Change Index shows the 30-day rate of change of the mining pools’ unused supply. This shows a notable increase in distribution over the past two weeks, which has generally coincided with a drop in the overall hash rate. Miners have been delivering online at around 4k to 5k per month for the past two weeks. This reversed the trend of net accumulation that had been active since April. 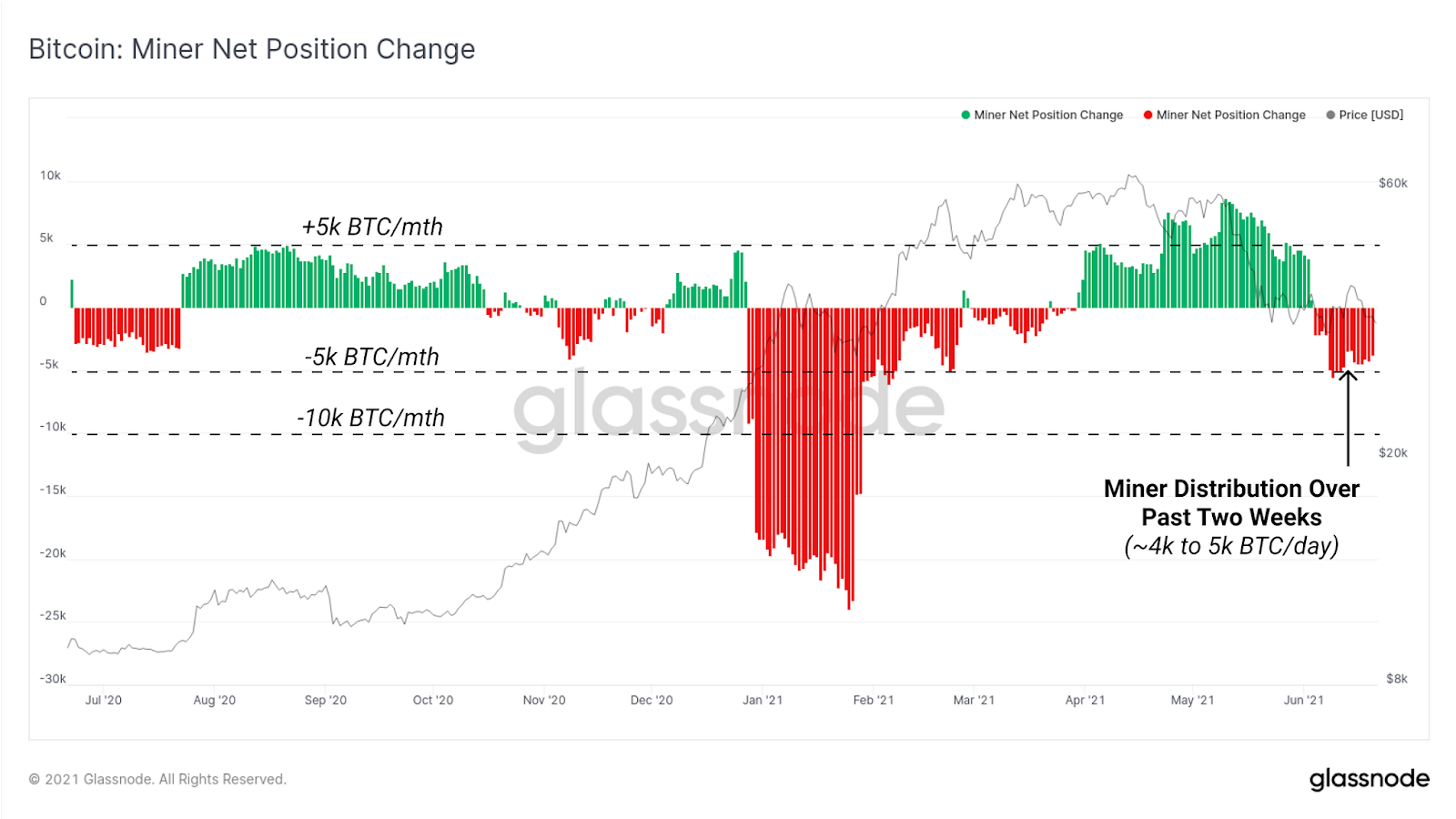 Finally, we should also look at the holdings on OTC desks used by miners to distribute their large amount of coins, with large volume buyers.

During the sell-off in May and over the past two weeks, a net inflow of between 3K and 3.5k BTC was observed. However, in both cases, almost the entire size of the capital flow was absorbed by buyers in just a few weeks. Overall, the total BTC holdings on the OTC desks we track have remained relatively stable since April. 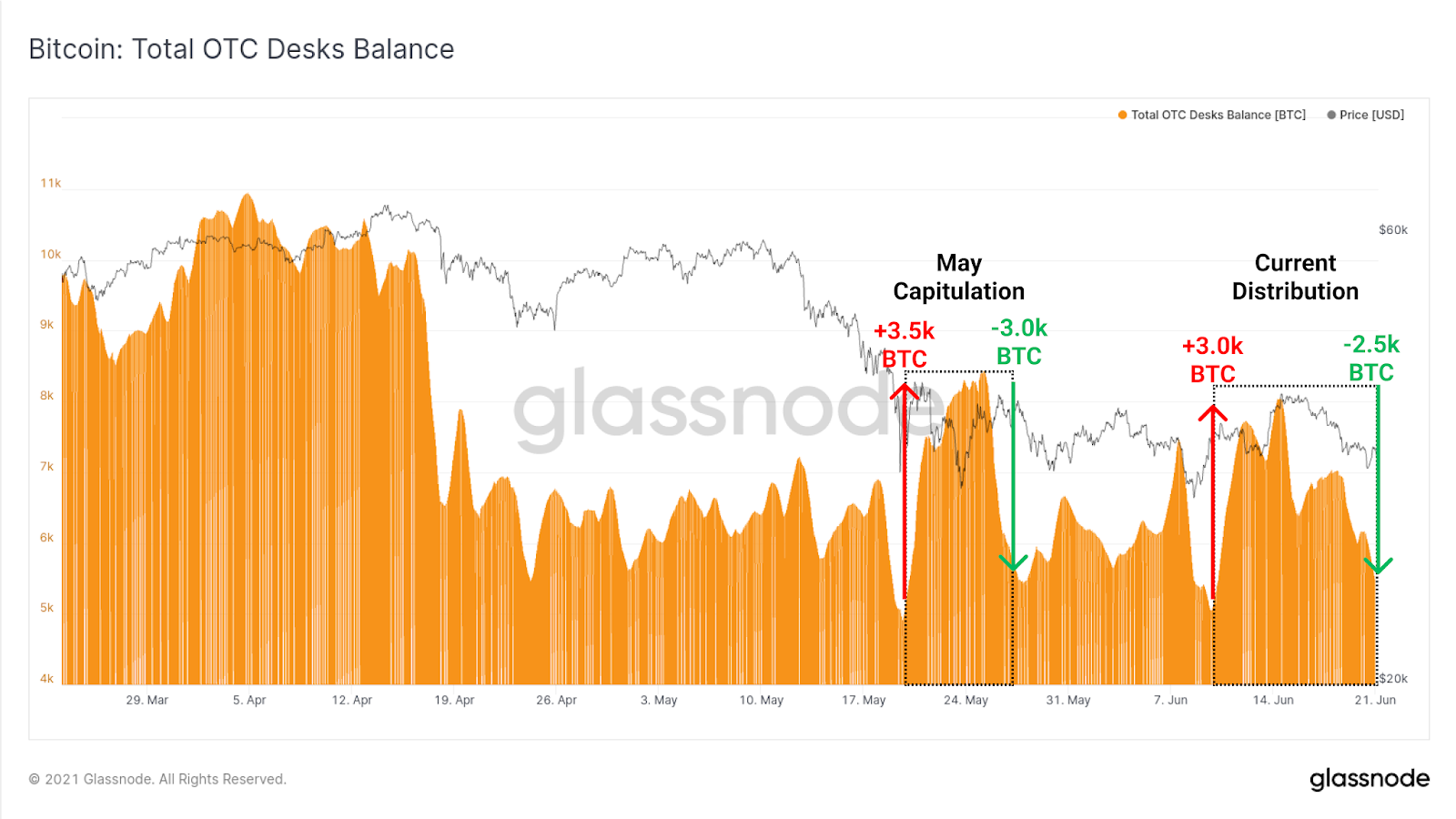 Avoid these infuriating crypto scams (don’t be the next!)