The market experienced another strong week, with Bitcoin price rising from a weekly low of $43,998 to a new multi-month high of $49.669. As Bitcoin moves closer to regaining its trillion dollar valuation, confidence, conviction, and positive sentiment have followed this bullish momentum. The key level to watch in the near term to mark a break is $53k.

This week also saw some small gains being made on-chain by long-term holders, though so far it doesn’t look like significant volume has been seen. In this article, we will evaluate together the state seen on-chain as well as characterize the current spending behavior of investors.

In the derivatives market, open interest for both Futures and Options has increased along with Bitcoin’s new high. After a rapid decline from $27.4 billion (ATH during the May sell-off), open interest in the Bitcoin futures market is up $6 billion (+56%) from the lows of the recent consolidation this. This week in particular, has seen a $1 billion increase in futures contracts opened as traders start using more leverage. 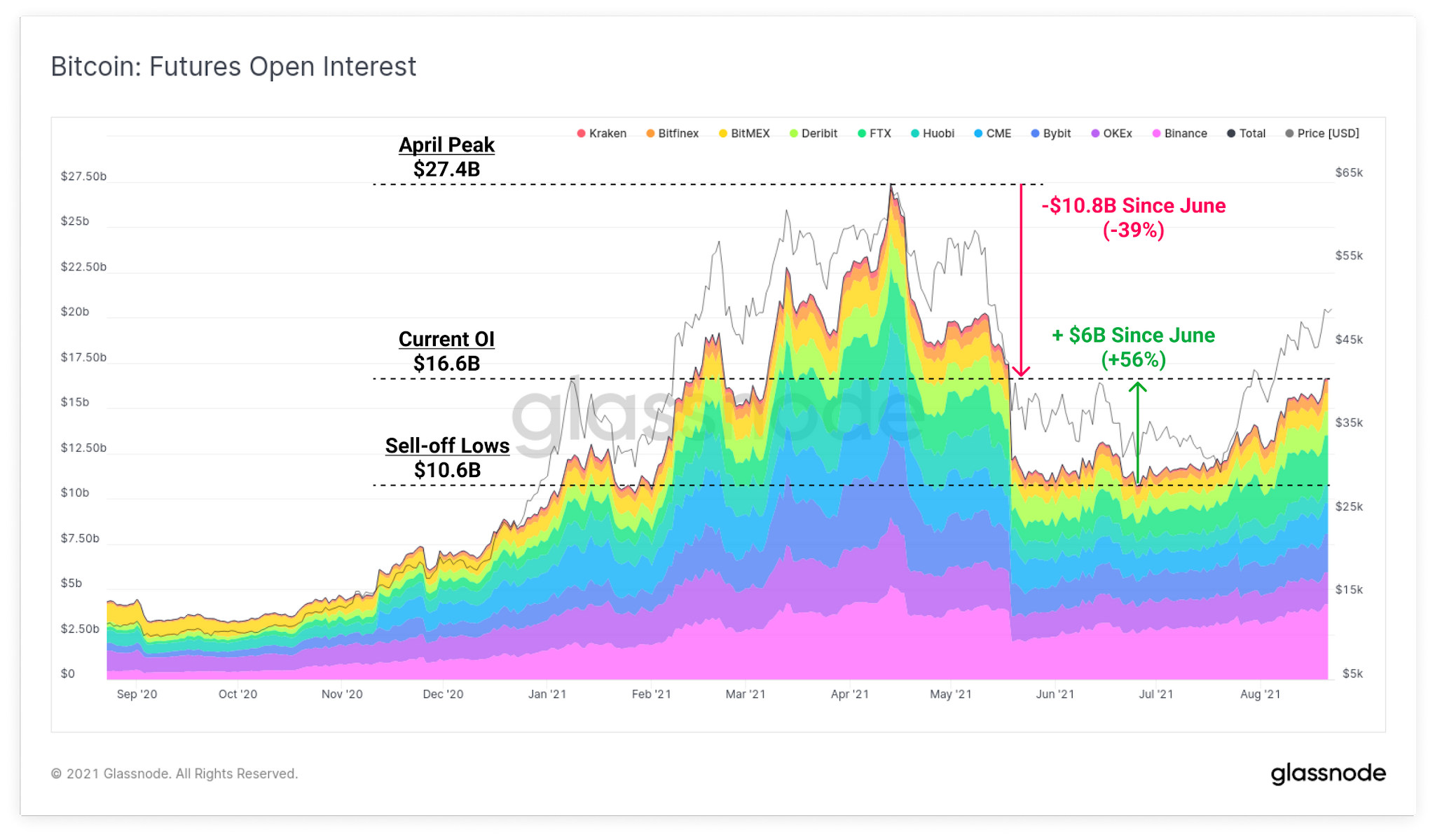 In terms of directional bias for traders, the funding rate for perpetual futures is moderately skewed over the long term. Deposit rates have been trading actively since late July when the futures market traded above spot prices. However, the level of funding is not at the height of the uptrend as it was in Q1-Q2. This could indicate that excessive leverage has yet to be exercised and perhaps the uptrend is still oriented as reasonable and healthy. 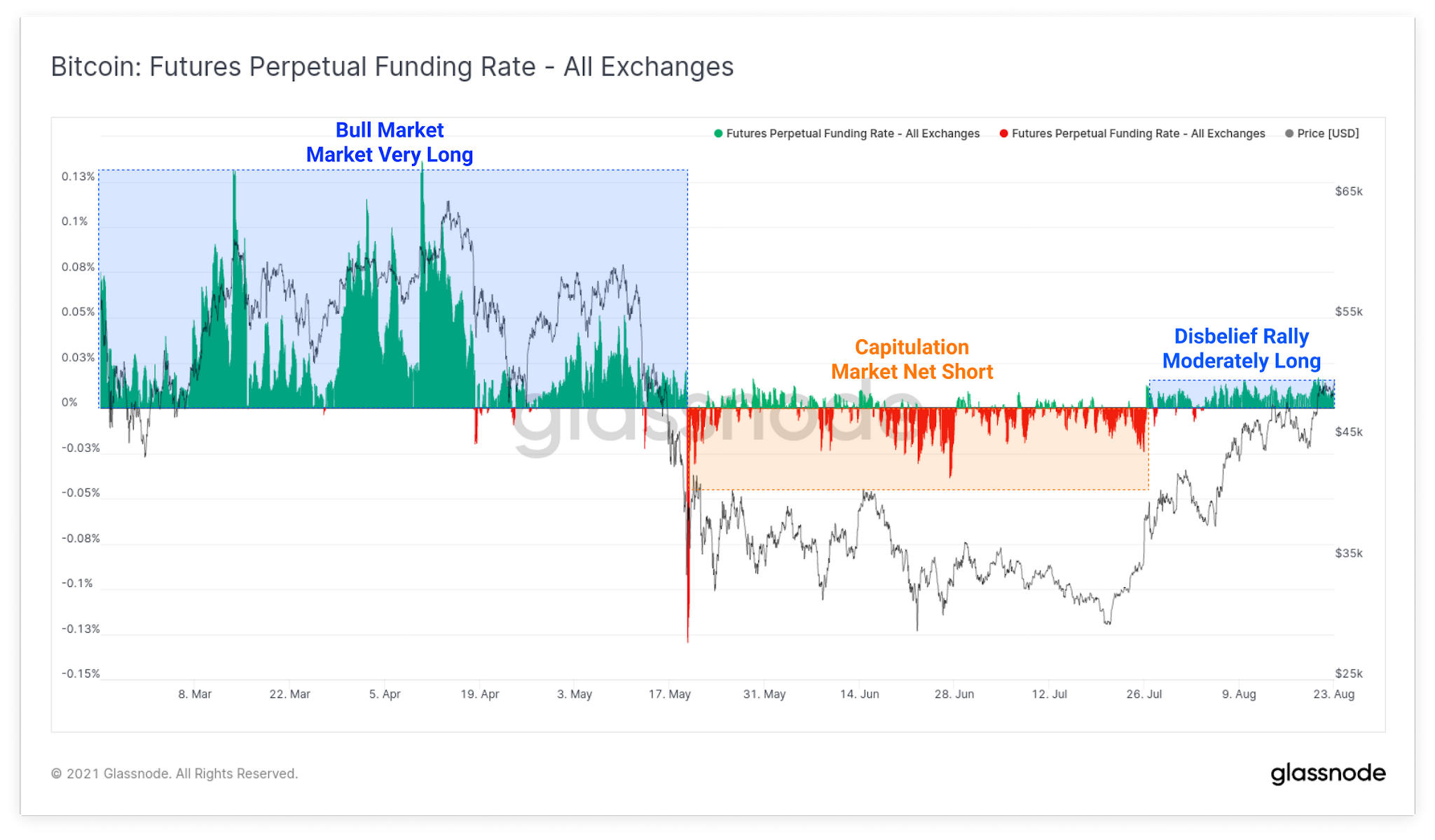 The options market has also seen new multi-month highs over the past several months, up more than $4.1 billion (+105%) since the lows set in June. The current level is $8 billion in recent months. Open interest is similar to the levels seen during the sell-off in May and January-February 2021. Note that prices were well below current levels, trades were made in the $30k to $40k range during the period. both previous cases.

This also suggests that relative to the total market size, the level of interest in the derivatives market is relatively low compared to the level of leverage seen in the first half of the year. 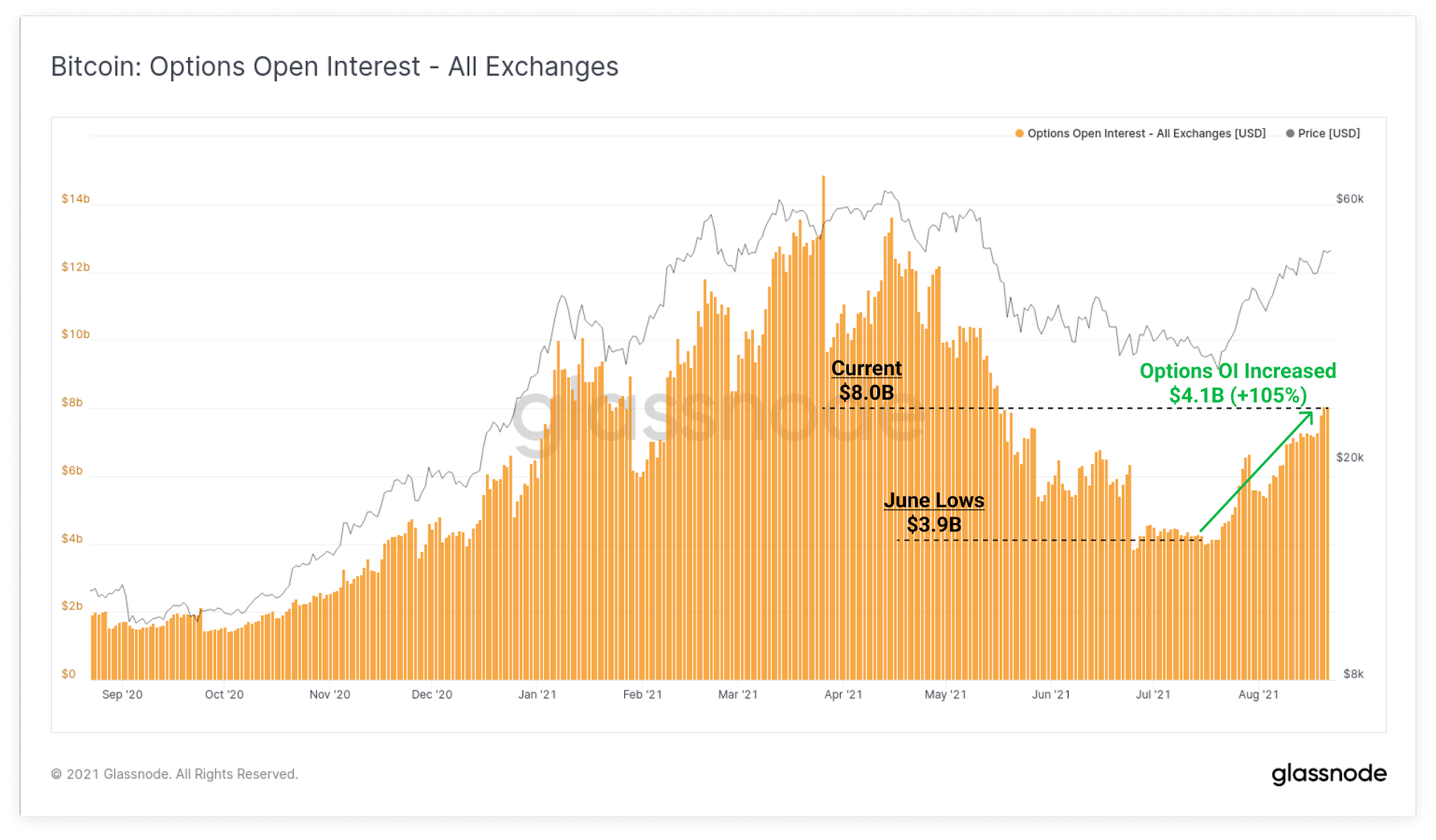 This week, there have been flashing signals online that some investors, especially those with older UTXOs, have been spending their coins. Additionally, this week has also seen a very slight increase in BTC held on exchanges, following a steady month in terms of exchange balances.

After a significant inflow of around 140k BTC to exchanges in May, July saw an outflow of around 110k BTC, much of the trend reversed. Throughout August, however, the exchange balance remained stagnant at around 2.5 million BTC (~13 percent of circulating supply). 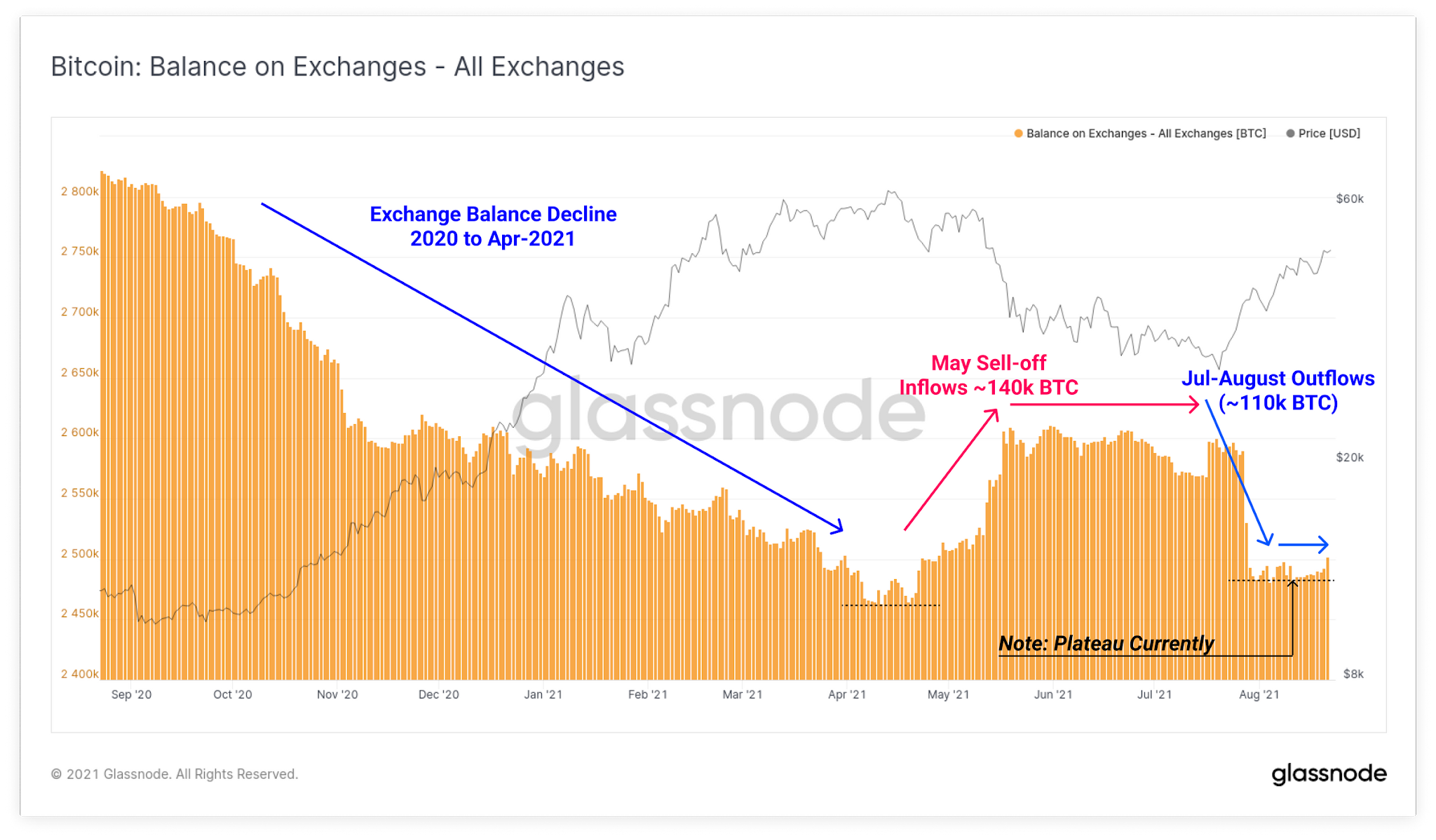 The exchange’s Net Flow Index shows that, this week, overall net inflows into exchanges increased as some traders and investors appear to be taking profits. and take advantage of the current market power. It is worth noting that the intensity of capital flows is not much different from that seen during the bull market period from December 2020 to April 2021 and this is reasonably expected behavior. 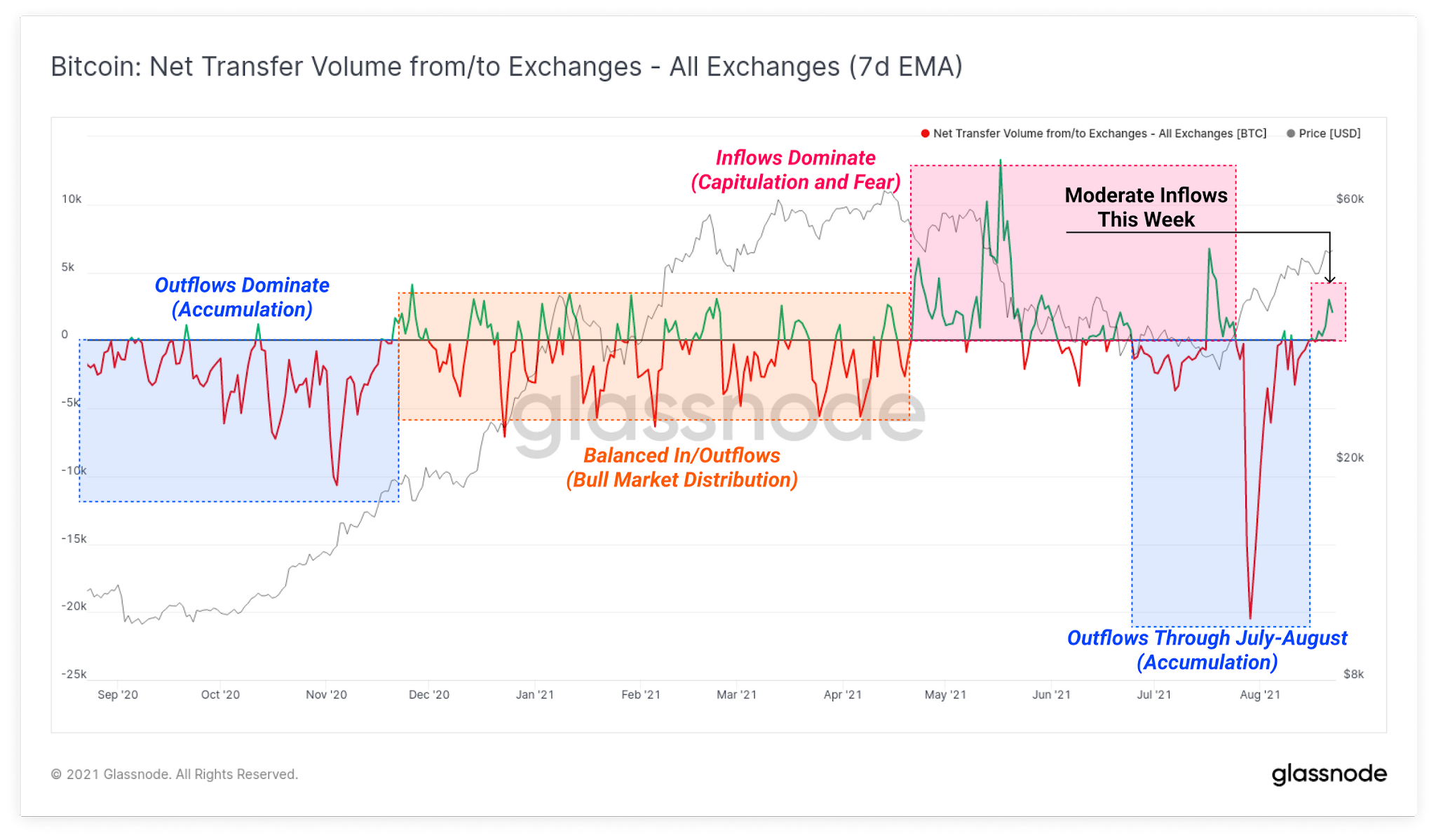 The chart below combines Realized Profit and Realized Loss indicators using the Workbench tool. From this, we can see that in general, investors holding profitable coins are now spending more on-chain than those with negative returns.

A drop in losses realized at year-end could indicate that investors have found new confidence to hold on to, or are likely to exit closer to their original cost base. when the price recovered to around $50k. 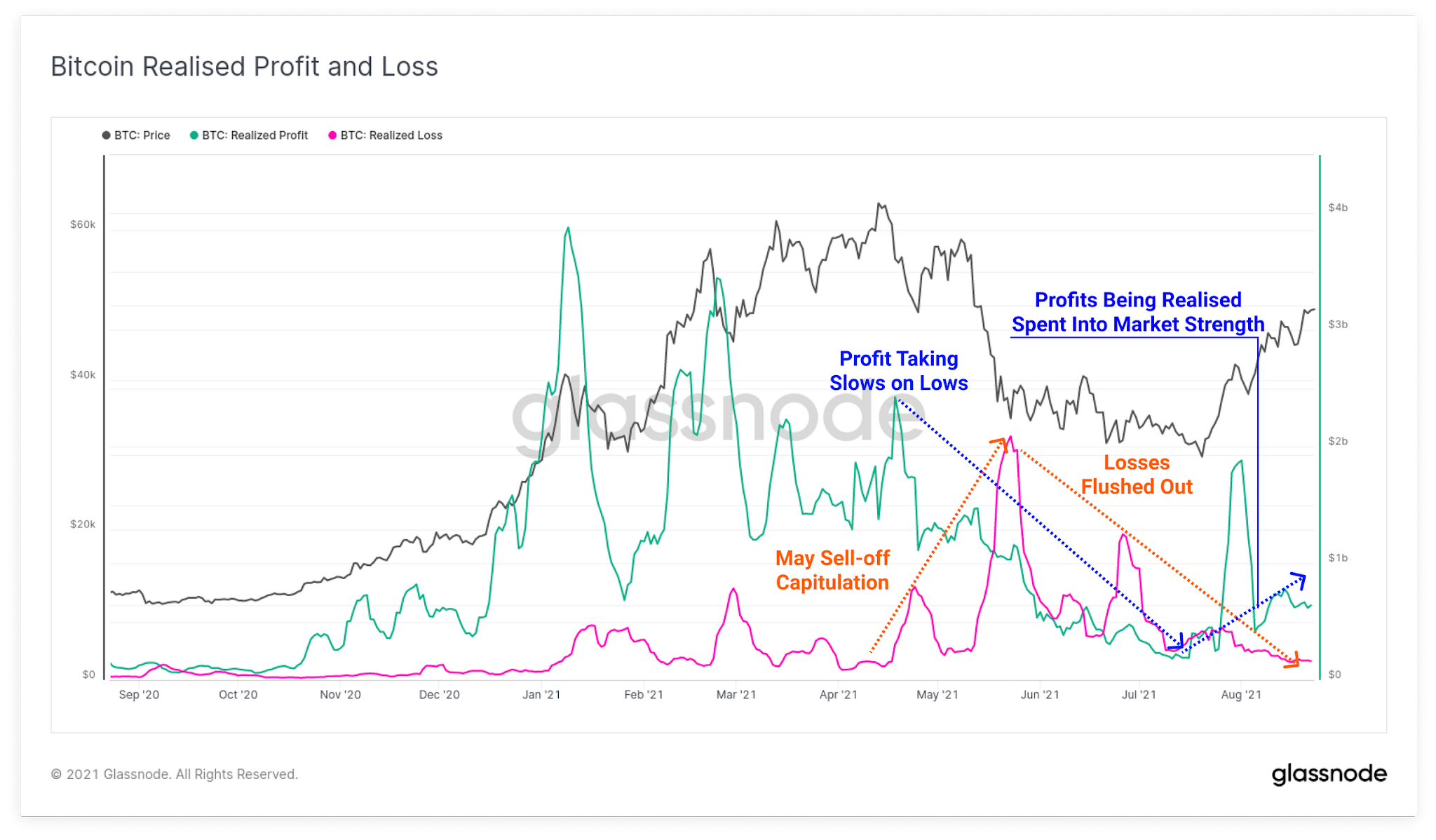 Who is spending on the chain?

If we investigate the Spent Output Age Bands index, we can analyze which groups of the market are spending coins. This week has seen a notable increase in older coin ages, especially those older than 6 months. Over the last year, these older coins have resumed operations on a similar scale on two occasions: 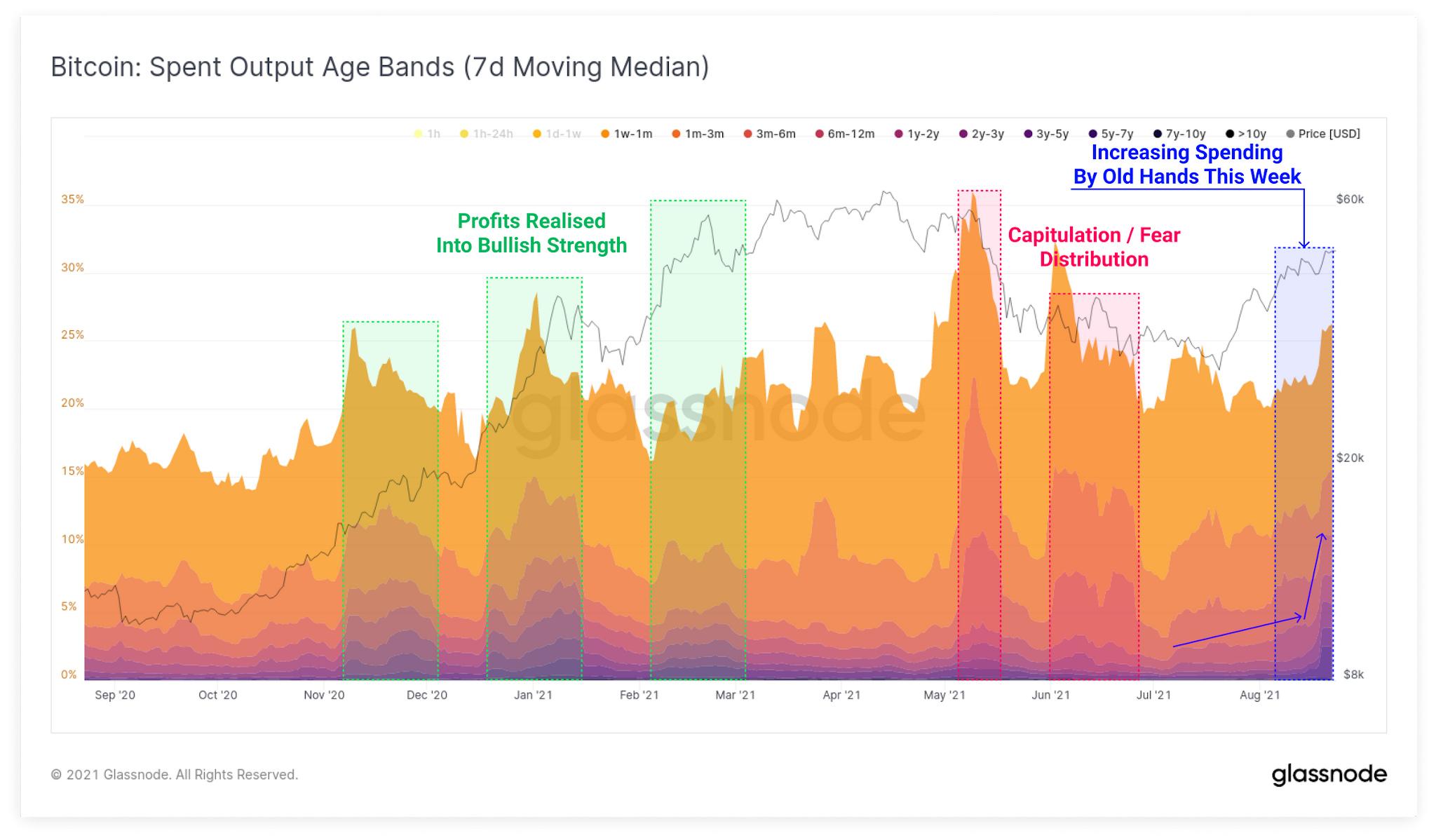 We can also see a similar view when looking at the spent outputs between the ages of 6m and 5y, which largely appeal to experienced Bitcoin investors and traders who have overcome the significant fluctuations in this cycle. In addition, we could also see a strong increase in all age groups this week, which further shows that some groups of coins are withdrawing liquidity. 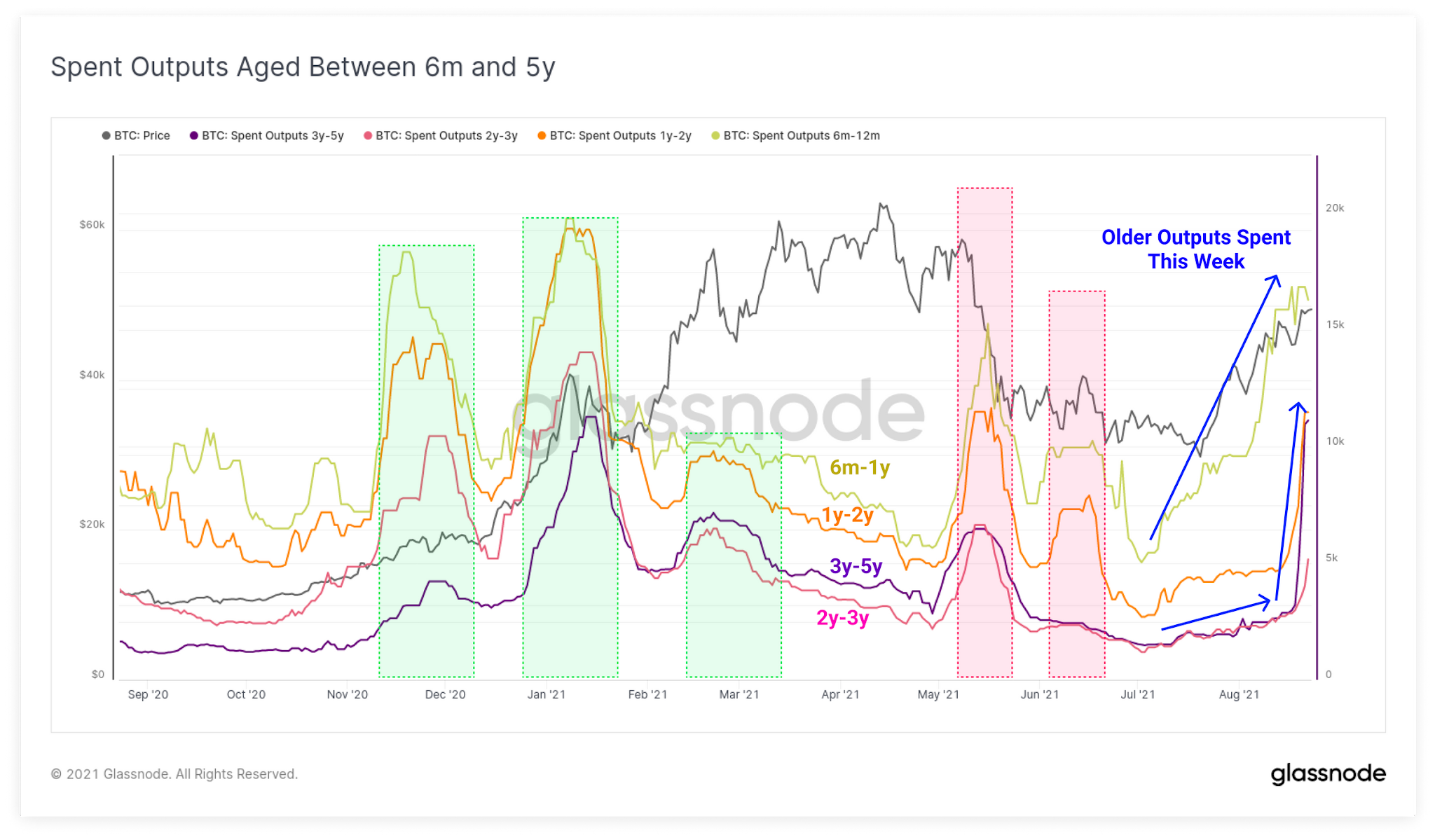 This view has also been emphasized by the analyst @TXMCtrades, who used the Workbench tool to observe the aggregate rate of all spent outputs between the ages of 6m and 5y. TXMC highlights that current spending behavior, where 5% to 7% of total spending falls within this age group, has historically been correlated with periods of high volatility.

It has also been suggested that compared to previous cycles, owners of older coins have tended to be more active traders in recent years. During the 2011 and 2013 cycles, older coins typically just bounced back around macro tops and bottoms, where today it’s more common around mid-cycle corrections and rallies. As such, this demonstrates just how mature the market and financialization of Bitcoin has been over time as more active traders and funds enter the space.

Spending on older coins has also emerged as a trend in the ASOL index that measures the average age of all spent outputs that day. This mid-age uptrend has been around since July, and throughout this bull run suggests two things: 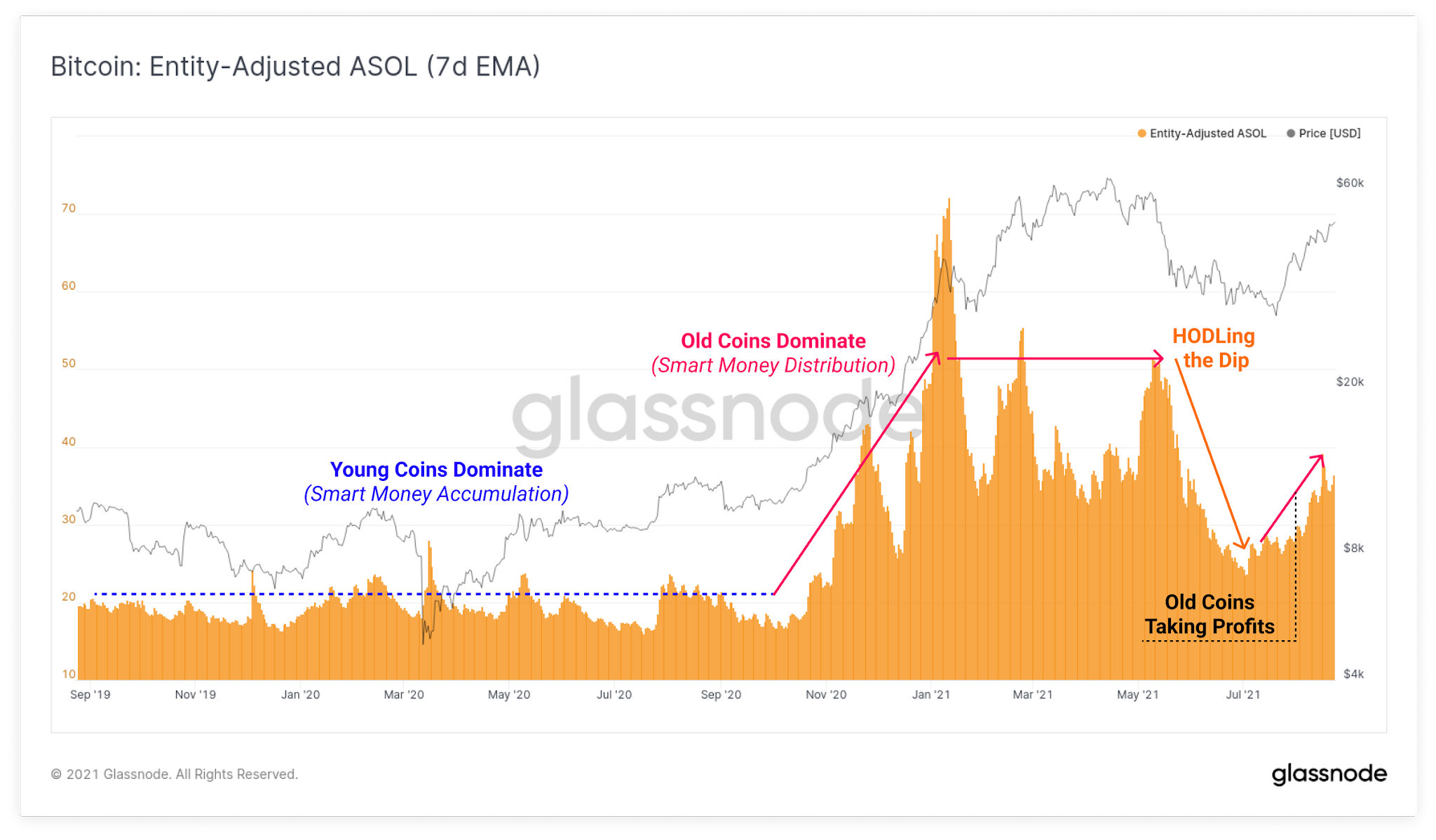 The HODL Cap Realized Waves provide an ultimate proof around current on-chain spending behavior, as bands of young coins (<1 month old) have been increasing throughout August. This shows that coins Old coins have been used and revalued into younger age brackets.

Note, however, that the increase in these age groups is very much in line with the increase seen in the 2020 accumulation period. This suggests that although older UTXOs were certainly spent in August, but the actual volume of coins they distribute may not be too significant. This supports the relatively small increase in the balance of foreign exchange shown in the graph in the sections presented above. 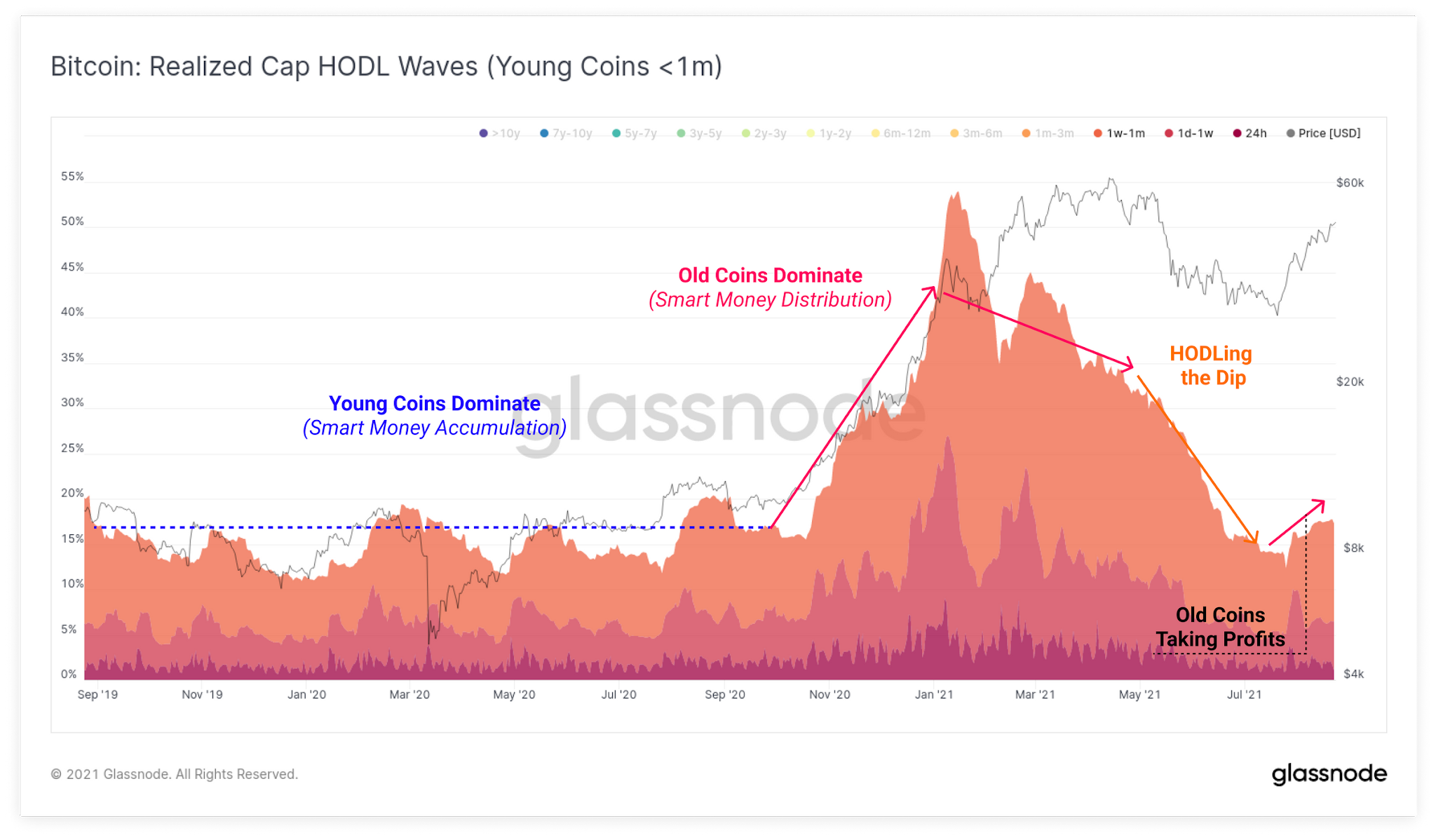 Currently, there is an amazing divergence, the on-chain activity has yet to react to the positive price action. The “Adjusted transactions” entity remains at a historic low at 175k to 200k transactions per day.

Lows like these have historically been witnessed over the past 5 years: 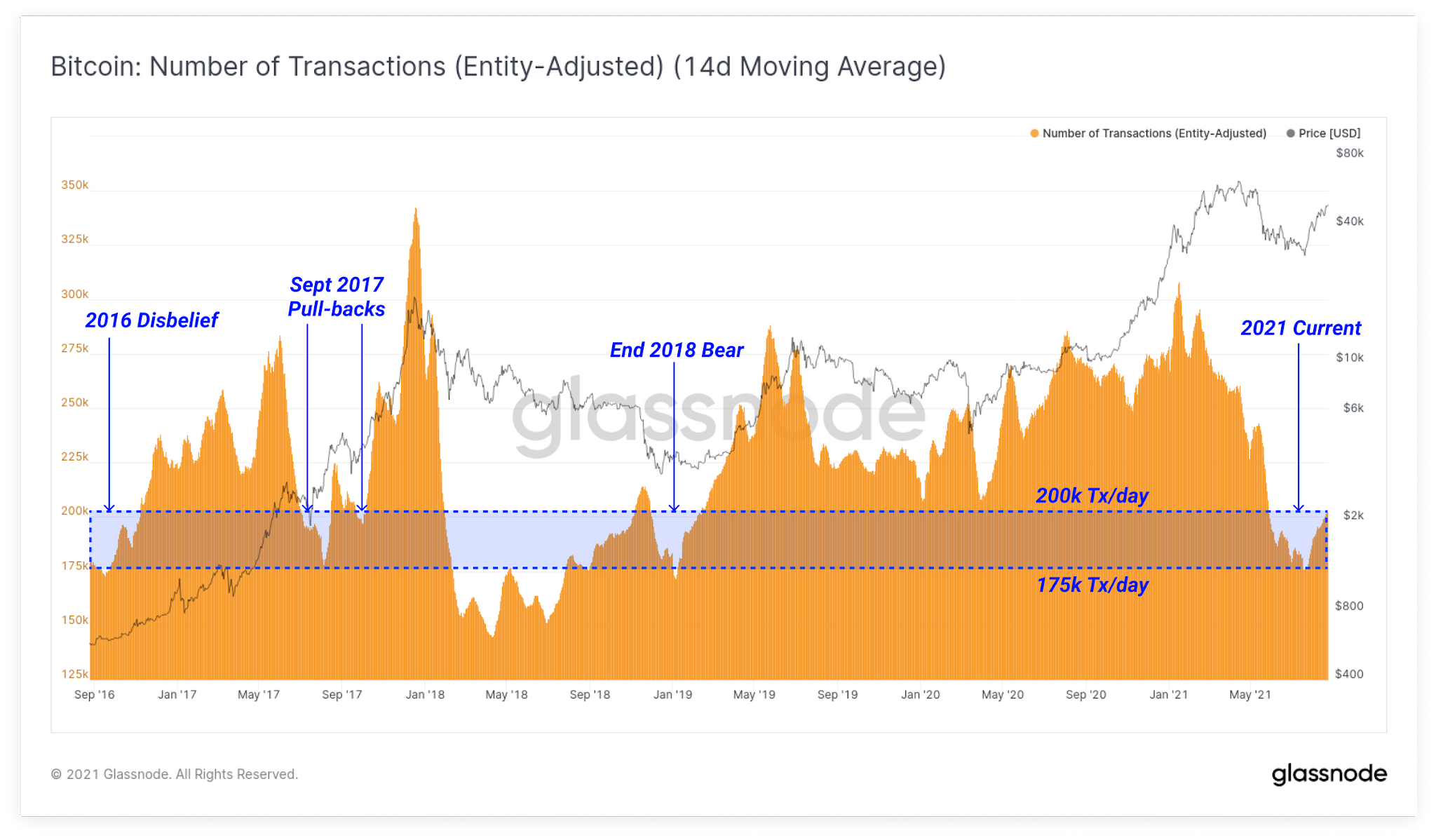 Trading volume has also dropped in a similar fashion, with the Bitcoin network setting up around $18.8 billion in daily volume. This is 37% below the peak of the bubble in 2017 and 57.6% below the peak set during the speculative event in May. That said, settlement volume is still 276% higher than the typical $5 billion throughout 2020, although we should explain that the price has traded up from $10k to current levels near $50k. dollars (+ 500%). 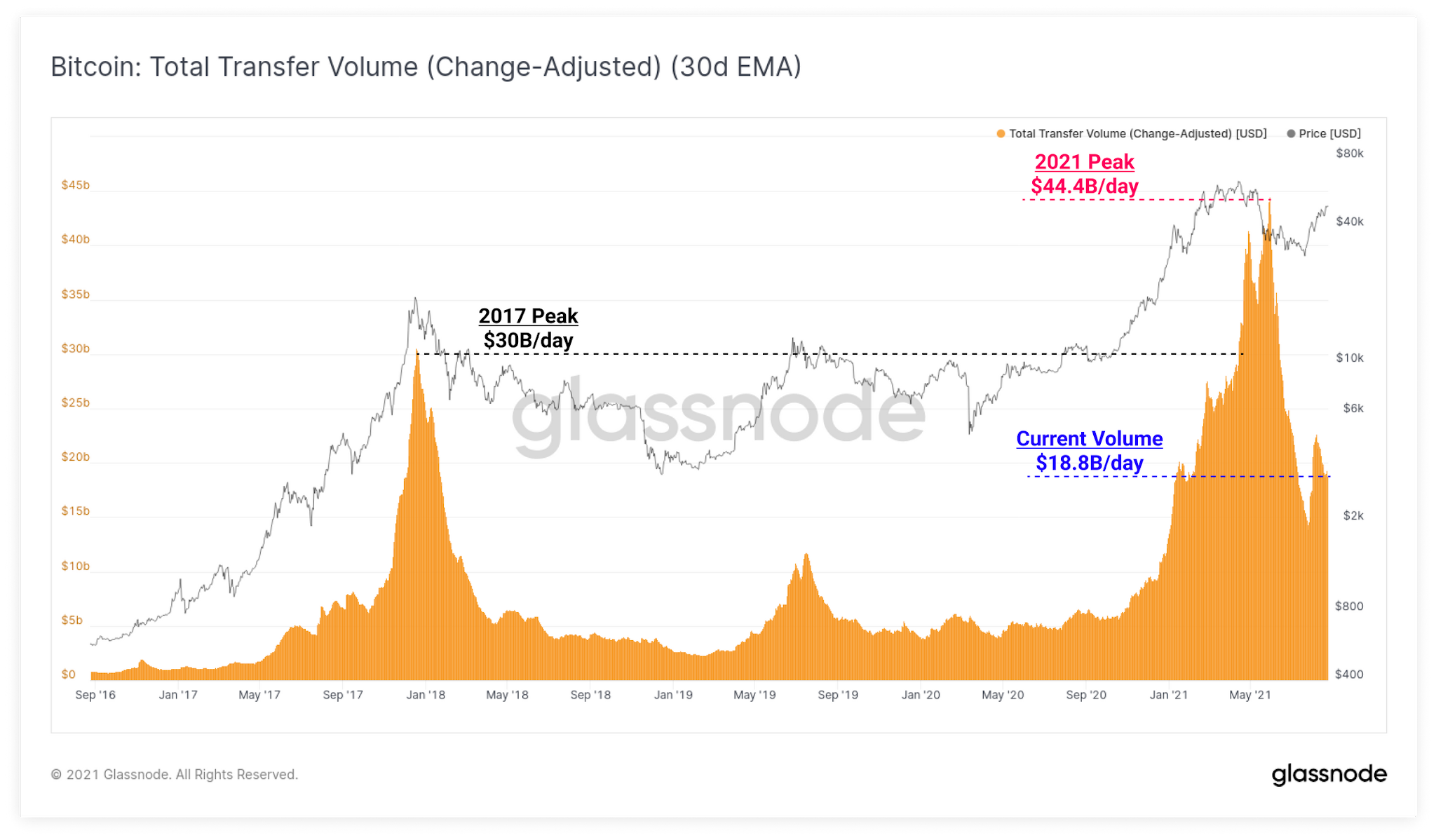 However, despite the difference between bullish prices and low on-chain activity, the overall supply dynamics remain phenomenally bullish. This week, the supply held by long-term holders hit an all-time high or 12.69 million BTC, surpassing the previous high since October 2020.

Through the Q1-Q2 bull market, LTH distributed around 1.75 million BTC, which eventually created an oversupply and fed into the current ATH price. Since then, investors have reduced their spending significantly and the coins accumulated in late 2020 and early 2021 have consistently matured within the ~155 days threshold to be classified as ‘Colleagues’. long-term hold – LTH’.

The recovery of LTH supply for ATH only took 100 days, which shows how significant accumulation was in the early stages of this bull market. The fact that this trend hasn’t slowed down also proves that more and more coins are getting older compared to younger coins. This adds weight to the argument that the outflows from legacy coins observed this week may be a psychological risk-reduction strategy, rather than a loss of confidence and mass exits. 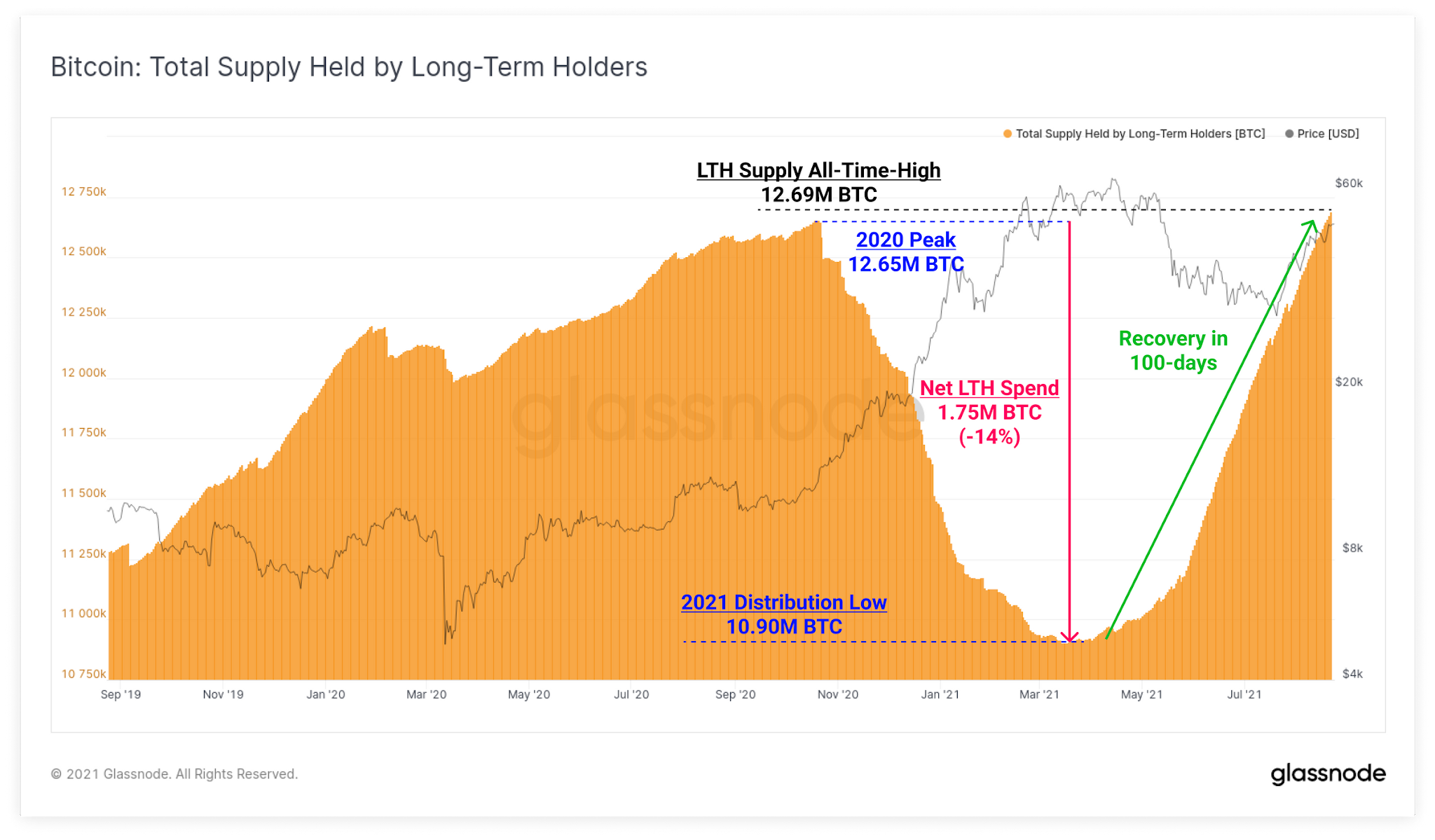 The source: Glassnode or Video