The Bitcoin market experienced a massive sell-off earlier in the week, with BTC price initially breaking a new high of $52,849, before selling off, to as low as $44,196. It appears that the main driver of sellers, is the liquidation of excessive leverage in the futures market.

Meanwhile, in the spot market and on-chain data, investors’ long-term accumulation and holding trends are still very good and intact. Despite experiencing a sell-off of more than 50% in May, a strong bounce from lows of $29k, and now another sharp sell-off this week, HODLers do not appear to be in decline. transfer.

This week, we’ll explore the leveraged liquidation that drove BTC down, as well as take a look at the dynamics on on-chain data on Bitcoin’s supply.

Derivatives market leads to bearish volatility in the market

In last week’s newsletter and video, we covered the growth of open interest futures and positive overnight fee percentages in the Bitcoin and Ethereum markets.

This highlights the growing risk that over-leverage can, with its long-term bias, create downward pressure on prices. On Tuesday, both markets actually saw a significant sell-off, with Bitcoin trading down over $10k in an hour. The event liquidated most of the accumulated leverage, with the market consolidating sideways for the rest of the week.

From a peak of $13.4 billion in open perpetual forward interest, a total of $4 billion (30%) contracts were closed and liquidated within an hour. Leverage remained fairly steady at around $9.4 billion for the rest of the week. 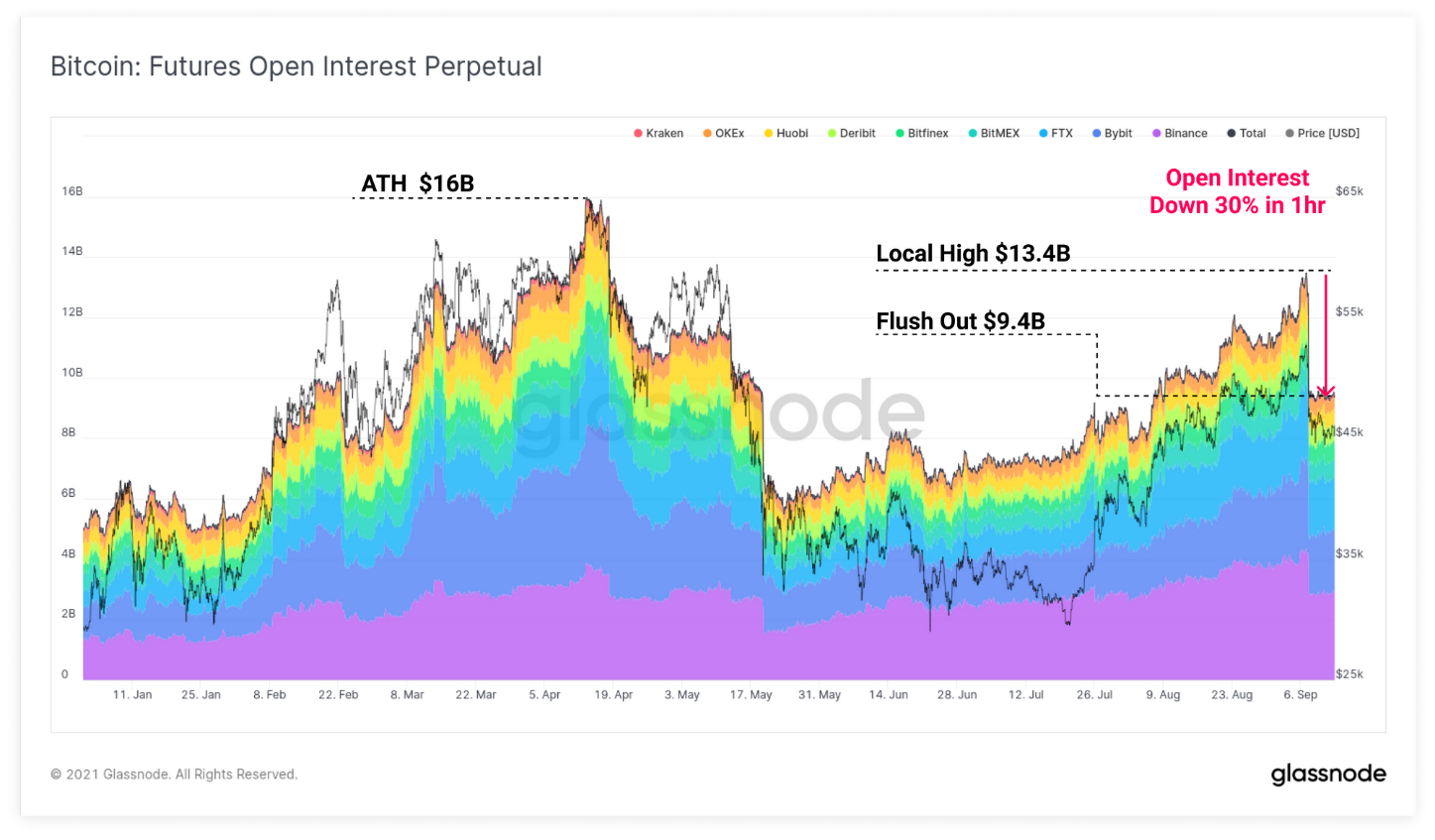 Using the “Long Liquidation Domination” indicator, we can see that just prior to this sell-off, the futures market actually experienced a short-term short squeeze, which pushed price to a high of 52.8 thousand dollars. Short-term liquidations accounted for 80% of all liquidations during this period.

Immediately after this peak, the opposite happened, with the liquidation rate of long positions skyrocketing to 68%, causing the BTC price to drop more than $10k from the previous high. 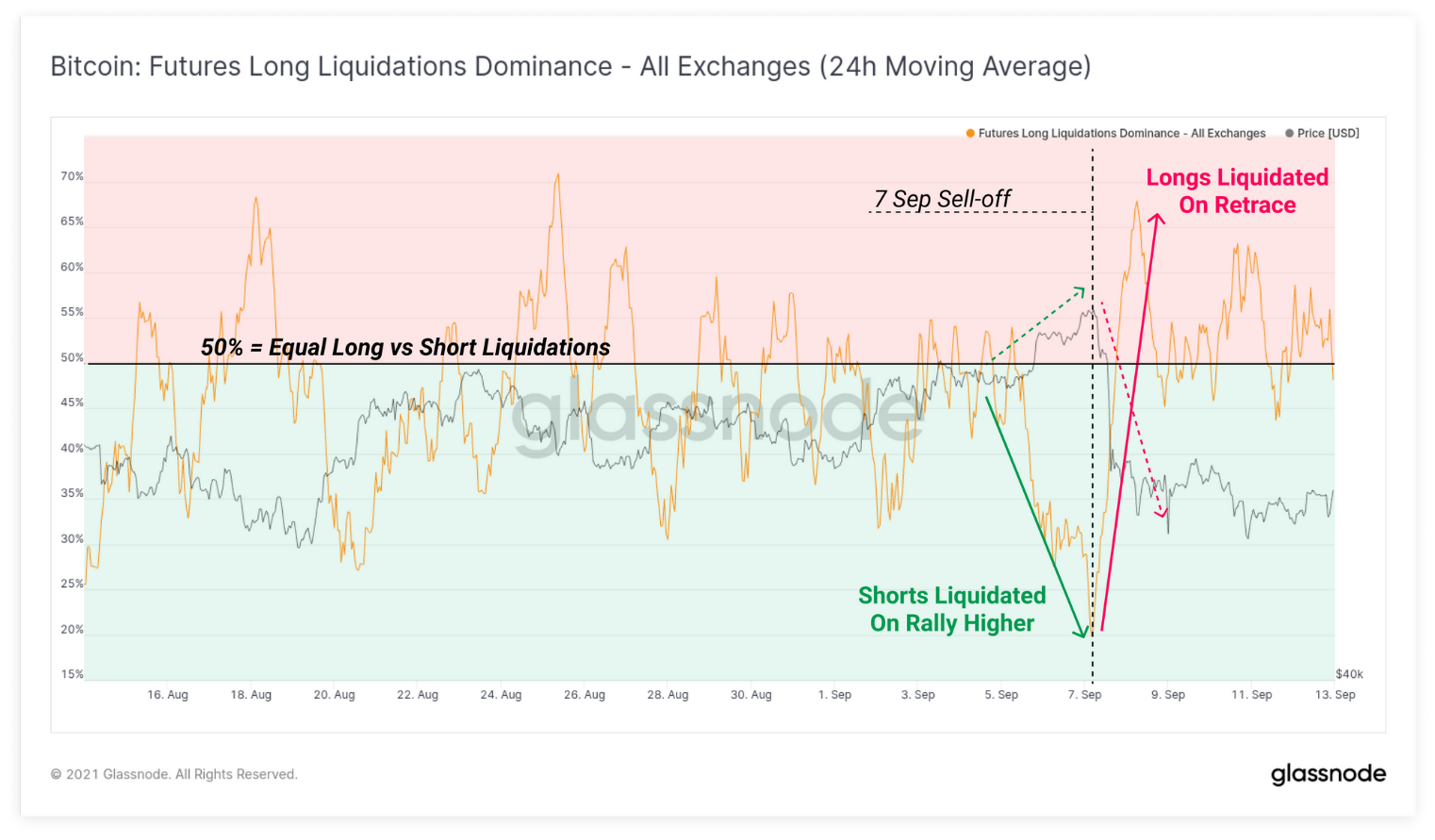 The options markets also saw a spike in trading volume, as traders rushed to buy their positions and capture the volatility premium. This has become quite typical behavior this year as the options market has always seen increased activity during market sell-offs.

Total volume in the options market has been in recovery mode since the activity was relatively lull from May to July. In the hours surrounding Tuesday’s sell-off, trading volume options hit a multi-month high of $1.3 billion. 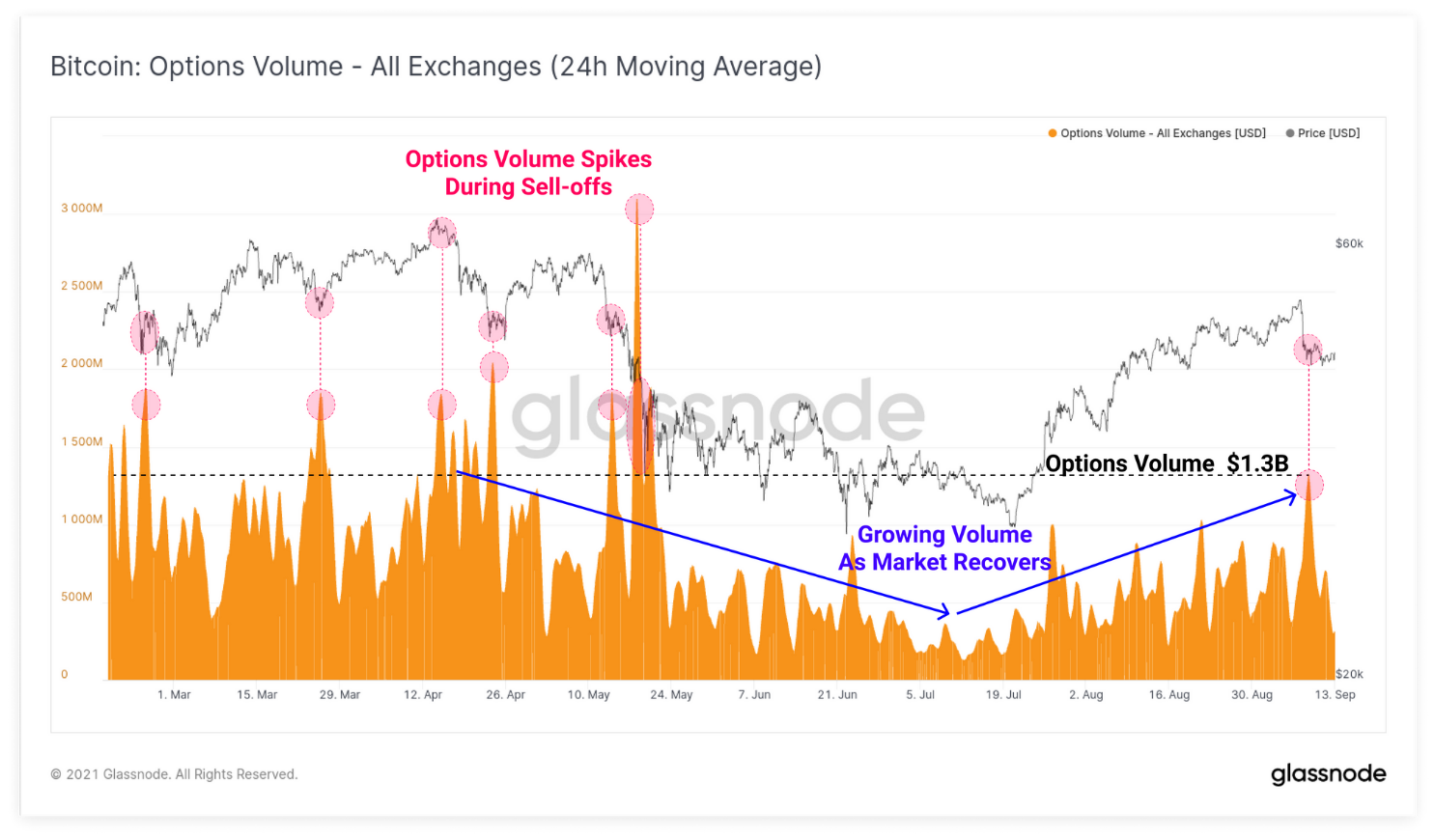 After a very short time when the Funding rate went negative during the sell-off, the perpetual market has returned to a slightly positive overnight rate, which shows that the Traders are still hoping for a bullish momentum. Note, however, that the overnight index’s level was much lower than it was before the sell-off, which suggests that at least some liquidation has reduced leverage. 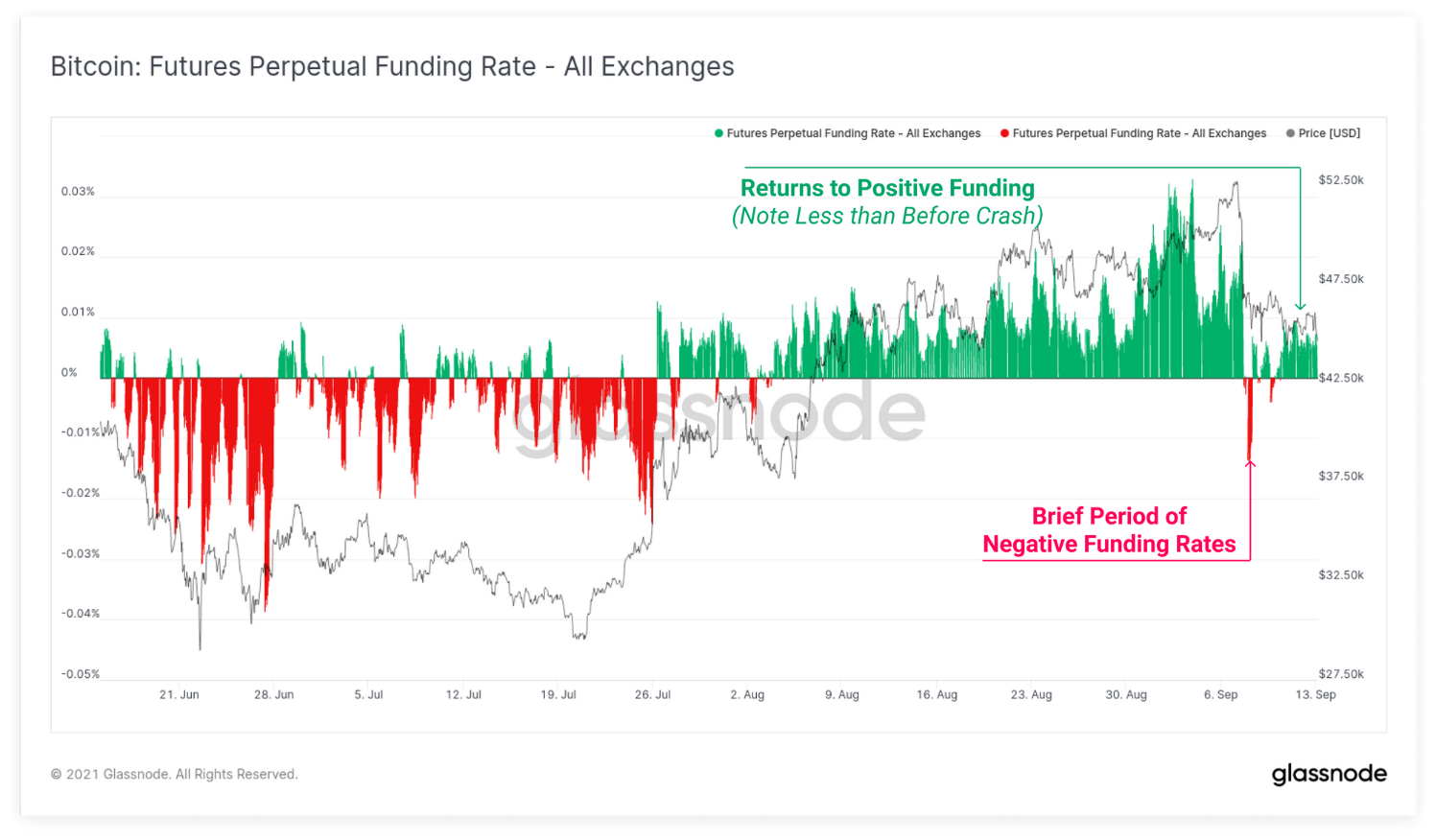 Next, we’ll look at how the spot market and on-chain data reacted to this sell-off. We start by looking at the average BTC hibernation time, through the average age of BTC spent that day, adjusted for each unit of BTC spent with two drawn observations. main: 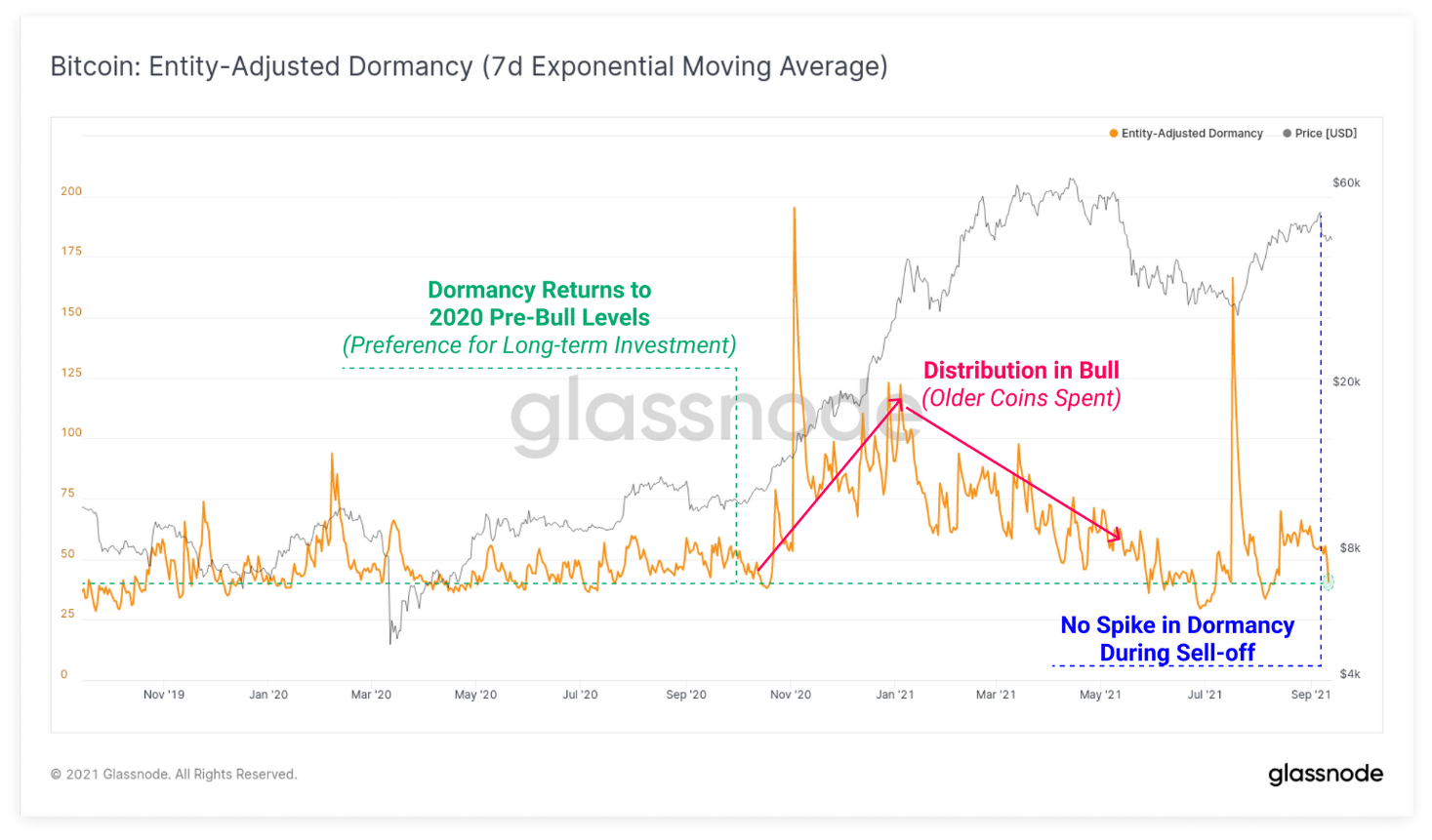 The recovered supply is a metric that shows how much BTC has been spent that is more than a specific age. We can use this tool to assess if there is an illiquid outflow and former HODLER BTC back into circulation, or if old coins are still inactive. A high rebound in supply may indicate a negative change in investor confidence, while a low value indicates that HODLer confidence remains intact.

This week, supply that has recovered from a year or more has fallen to a significant low, coinciding with levels seen in the period prior to the 2020 bull cycle. On a 7-day moving average basis, less than 2.5k BTC that are 1 year or older are being spent every day. Nine times less BTC was spent when compared to the 2021 bull market peak in January when over 22.5k BTC was spent when the price hit $42k for the first time. 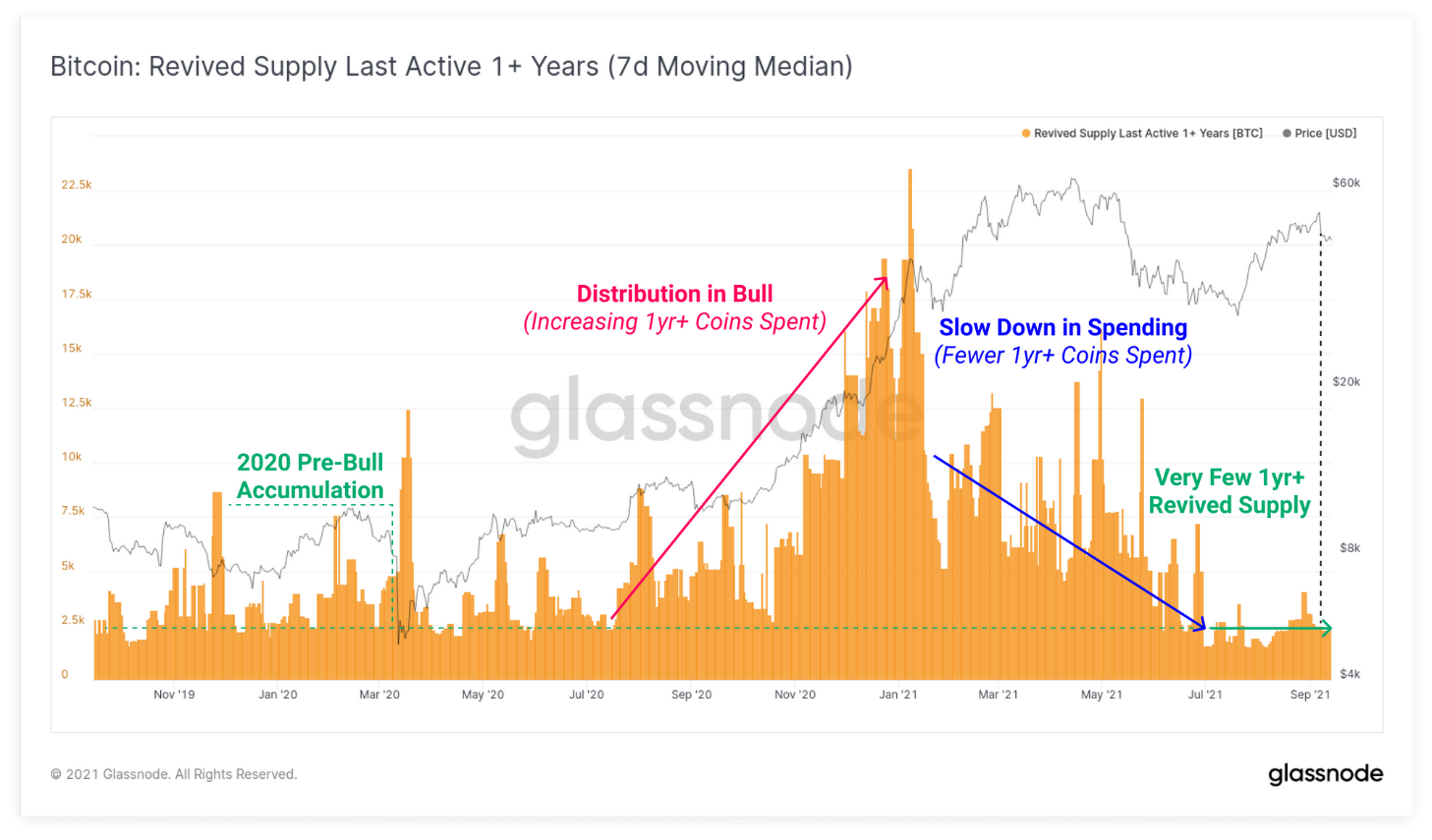 This observation is confirmed by assessing the ratio of supply in new HODL waves, with BTC less than 3 months old. Here, we can see that BTC under 3 months has hit an all-time low of 15.9% of the circulating supply. The point of this is that BTCs older than 3 months now represent an all-time high of 84.1% of supply.

Historically, periods in which BTC has just reached its lowest lows, have tended to correlate with a late-stage bear market (in blue) after a significant accumulation of BTC took place. This is when the excitement and interest in BTC is at its lowest, while the cumulative demand of smart investors is at a relatively high level. It describes new BTCs being taken out of circulation and beginning to accumulate in investor wallets.

The opposite is often true during late (red) and cycle top bull markets, where the maximum amount of old BTC is spent and passed on to new investors, attracted by the hype. , media coverage and price spikes. 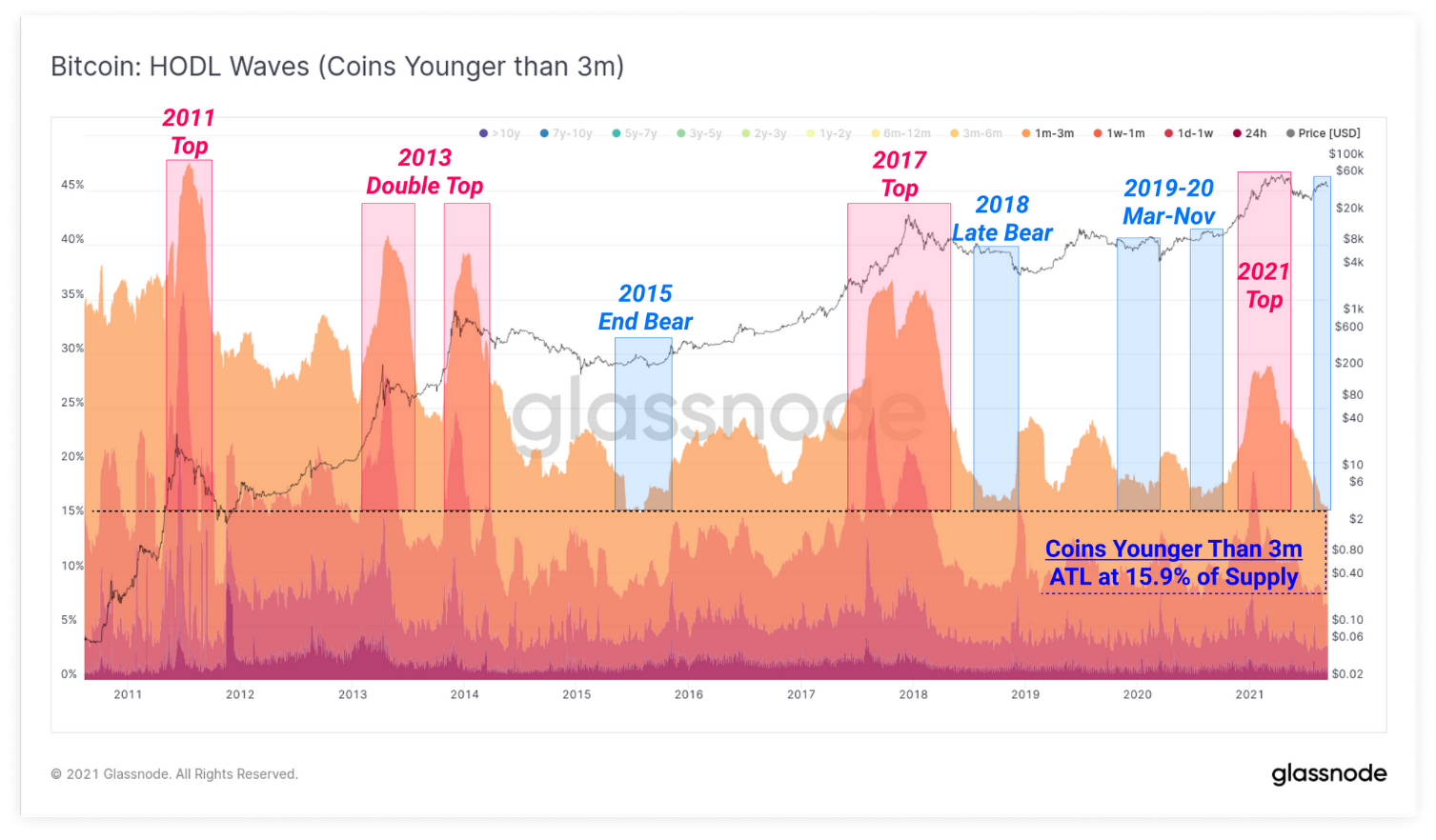 HODLers are often described as Bitcoin buyers of the last sale, who enter the market during periods of bearish volatility and bet when the market looks its worst. These high-confidence buyers are ranked the highest on on-chain data through BTC age, with our research showing around 155 days old being the right threshold between Long-Term and Short-Term BTC holders. .

155 days ago, in mid-April, when Bitcoin was trading at $60k, trading hit its current all-time high. As a result, any BTC purchased after the BTC price hits its all-time high will typically be classified as a short-term holder’s BTC (STH).

The chart below shows that at this week’s high of $52.8k, more than 16.8% of the BTC supply is owned by short-term and profitable holdings. This reflects the huge accumulation that occurred between the recent lows of $29k and up to the lower levels when BTC prices were at their Q2 highs. 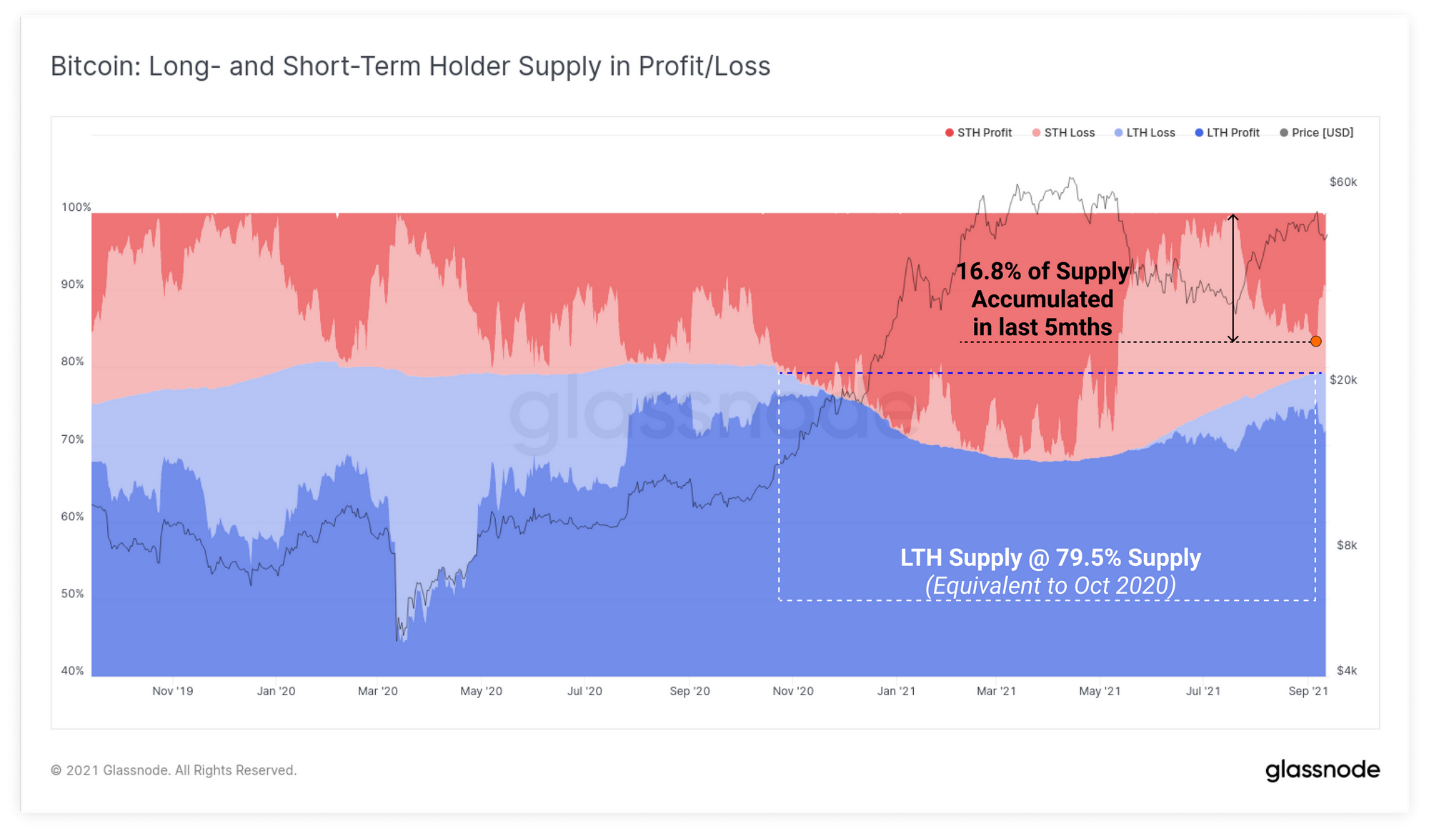 We can also see that the supply owned by long-term holders has reached 79.5% of all BTC coins this week, roughly the same level reached last October, before the bull market. price starts. In fact, on an absolute BTC volume basis, long-term holders now own the most BTC in history, reaching 12.97 million BTC this week. When short-term holders-owned supply peaks, which typically correlates with late-stage bear markets, historically followed by a drop in supply and the start of bull runs of the next cycle. 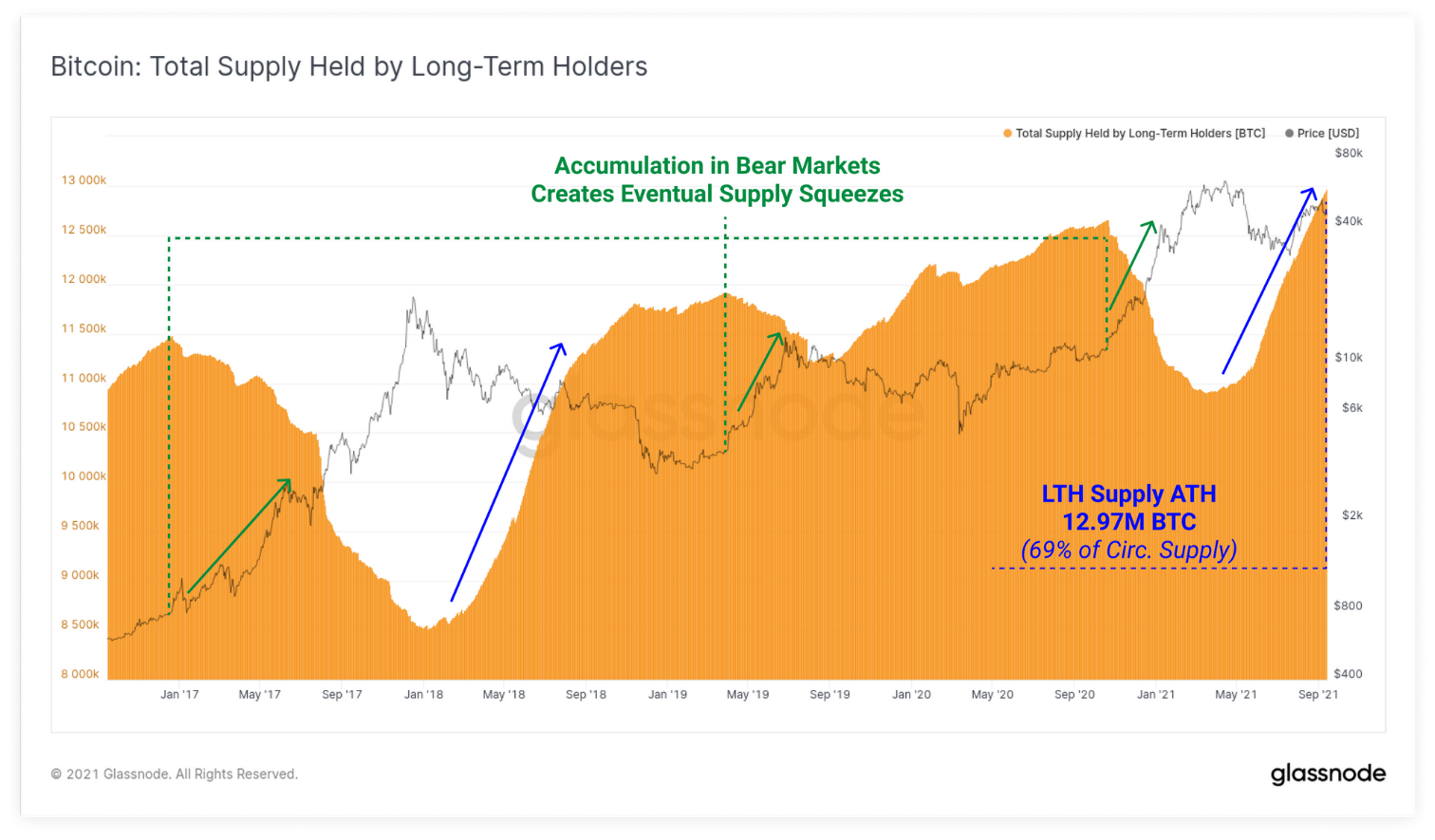 It is quite impressive to see BTC volume surpassing the 155-day threshold of short- and long-term holders, which has maintained a very positive ratio since May. One can reasonably expect it to slow down as many of the original BTC bought in Q2 2021, in the $50k to $64k range, were sold at a loss in May and June.

However, the charts above and the change in net position of long-term holders do indeed demonstrate that a very large portion of the supply is accumulated in that top range, still unspent and held tight. until today.

Currently, the coin is breaking through the long-term holder age threshold at a strong rate of 421k BTC per month. We have determined that over 16.8% of supply has accumulated in the $29k to $40k range recently, which could lead to a case where this trend will continue into October – December (155 days after the May-July period where BTC price was flat). 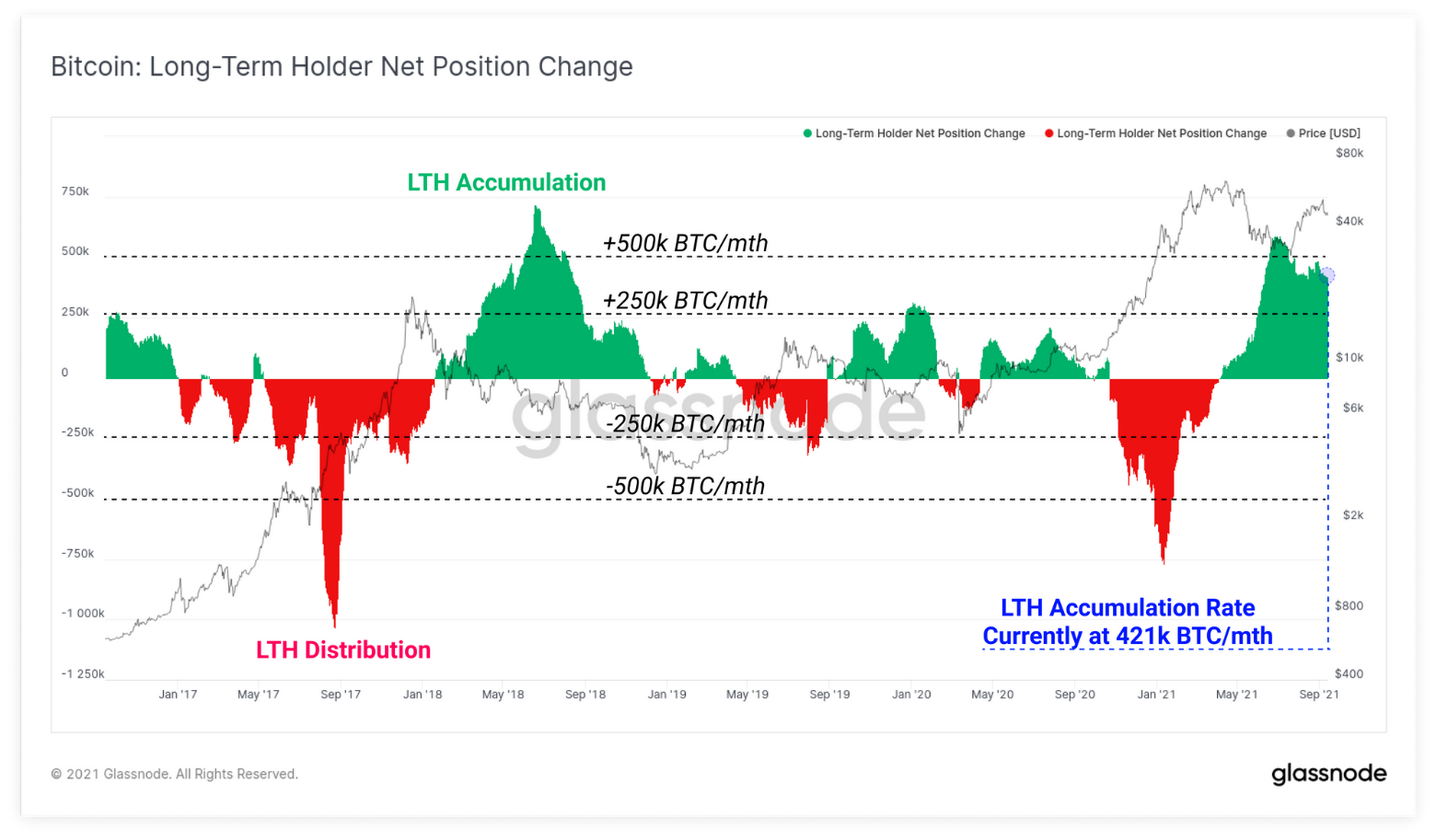 Finally, we look at the highly liquid and liquid BTC supply, (see our methodology: see our methodology) on a macro scale, highlighting the unique position of the current market cycle. For most of bitcoin’s lifecycle, there has been an expansion in the volume of freely circulating and regularly spent coins on-chain. After the last capital sell-off of the bear market of 2018, the supply of liquidity began to stabilize, a trend that persisted until March 2020.

After the sell-off in March, the structural trend of increasing BTC illiquidity dominated the on-chain supply dynamics, as more BTC was moved out of exchange wallets and into wallets. long-term investors.

After moderate amounts of BTC entered the market in May 2021, this downward trend in BTC supply (increasing HODLing behavior) has continued, showing that macro confidence in BTC holdings remains a force. dominance in the market. It seems that despite the significant price volatility in 2021, long-term Bitcoin investors continue to accumulate and keep funds in cold wallets. 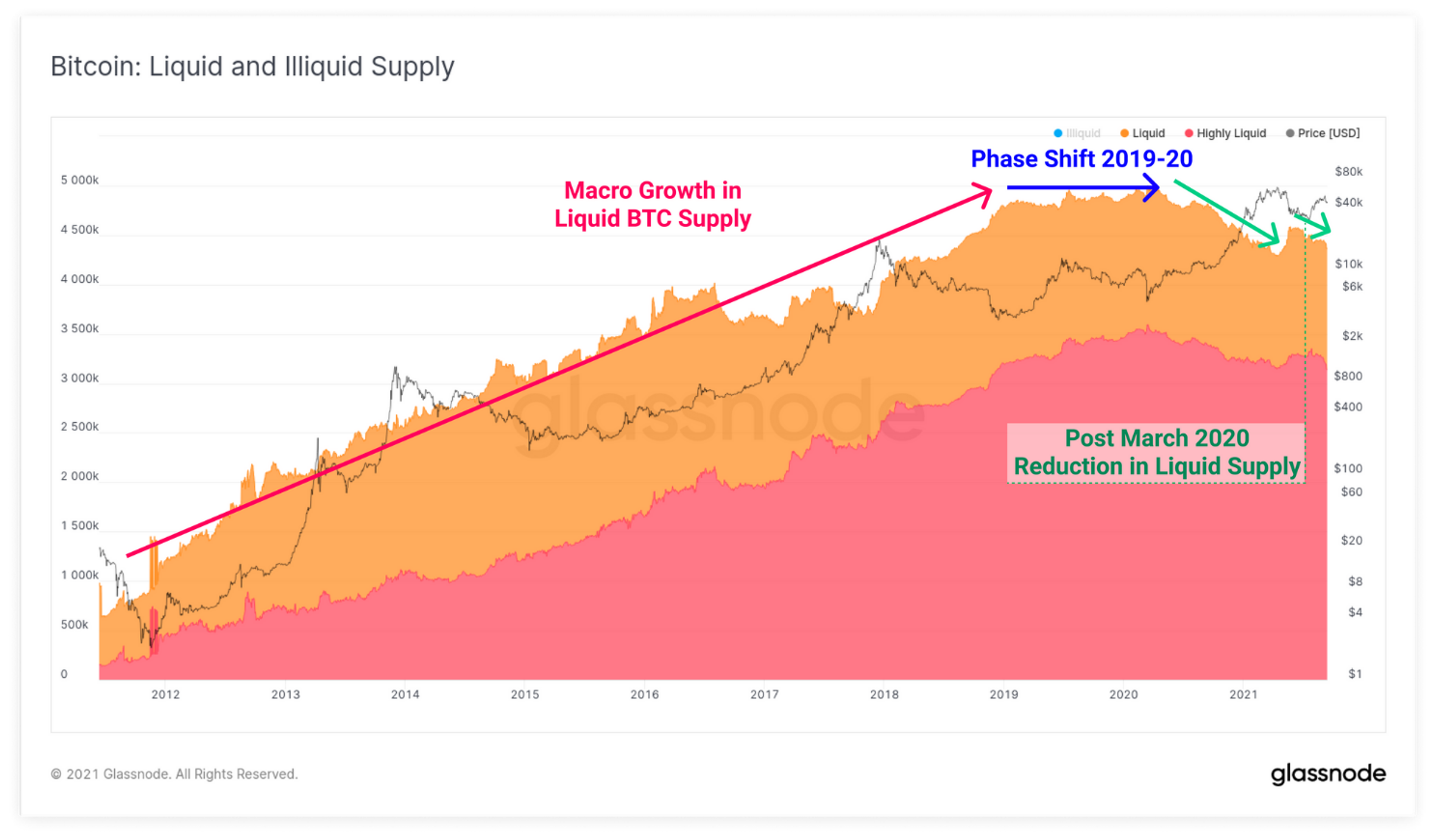 Central Bank of Singapore: We Want to Be a Responsible Global Cryptocurrency Hub