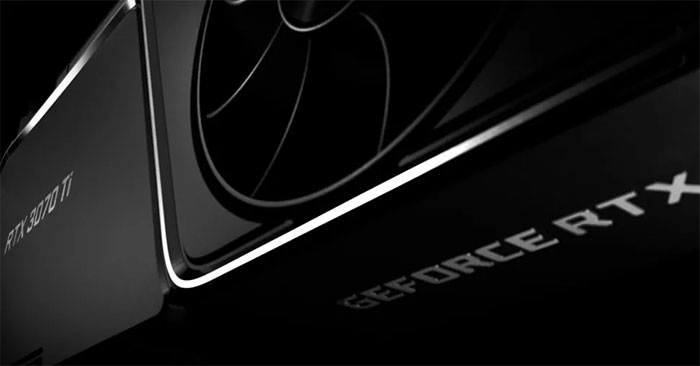 The global GPU market is witnessing a severe supply shortage that causes the price of specialized graphics cards to increase “out of control”. One of the main reasons for the problem lies in the sharp increase in cryptocurrency mining activity over the past several months.

In fact, the use of GPUs to mine hot cryptocurrencies such as Ethereum, Dogecoin has made graphics cards scarce and increased sharply from the beginning of 2021, negatively affecting the machine hardware market. world count.

GeForce RTX 3070 Ti has just officially been on sale since June 10, and is receiving a lot of attention from the market. The question is how realistic is the mining ability of this GPU model, is it limited as promised by NVIDIA?

Initial tests show that the mining ability of the RTX 3070 Ti virtual currency has decreased significantly, but for certain coins, but not all. Specifically, Ethereum is the most affected virtual currency. NVIDIA says that the driver of the RTX 3070 Ti is capable of detecting specific properties of the Ethereum mining algorithm – the most popular algorithm, with the highest performance and rate of return currently – that makes mining performance worse. This virtual currency is only half of the normal one.

In other words, Nvidia’s “suppression” of Ethereum mining comes from a significantly improved virtual currency mining toolkit. The algorithm works as intended and immediately reduces the hash rate of the GeForce RTX 3070 Ti from around 80 MH/s to 40 MH/s as soon as the Ethereum-related workload starts to kick in. Performance is essentially on par with Nvidia’s CMP 50HX unit, so using the GeForce RTX 3070 Ti for Ethereum mining is really unreasonable – unless someone can crack Nvidia’s anti-mining mechanism. , which is not a simple thing.

However, the limiter will only select Ethash and Dagger-Hashimoto algorithms, which means that the RTX 3070 Ti can still mine other cryptocurrencies without a problem. Field tests have shown that Ampere graphics cards are still a great miner overall for Ravencoin (KAWPOW), and Conflux (Octopus). Alternatively, other algorithms like CuckooCycle could show potential as well.

Thus, to be fair, the RTX 3070 Ti is not at all a “junk” when it comes to virtual currency mining. It’s just that the profit that this GPU brings will not be as expected by miners, making it a less attractive commodity.

As an example, the GeForce RTX 3070 Ti can currently earn around $3.25 per day for the right coin, but only around $2.25 per day for Ethereum. If the Ethereum anti-mining limit did not exist, this would essentially double, to $4.50 per day. Of course, cryptocurrency is an extremely volatile market, and the above-mentioned returns can change continuously from time to time.

At current rates, the RTX 3070 Ti’s estimated ROI for Ethereum miners will be around six months. But that’s in case we live in a different “world” where graphics cards aren’t in severe shortage, and you can still get the RTX 3070 Ti for a list price of $599. In the real world we live in, this GPU model is selling for 2-3 times the list price. If you can get an RTX 3070 Ti for less, consider yourself lucky.

Hopefully this strategy of NVIDIA can help the global GPU market quickly return to stability. And especially gamers can access quality cards, the price is in line with the real value they bring.