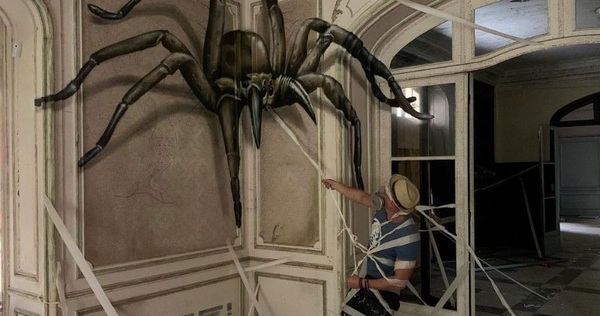 Pierrot (Scaf) is an artist who specializes in creating impressive 3D graffiti illusions, such as dinosaurs and lions that seem to want to jump off walls. He often takes pictures before and after his drawings are completed, to experience the incredible transformation when a simple wall transforms into a work of art.

A corner of the ugly industrial park has been stripped.

Pierrot has even started his own company, which allows him to bring his artworks to the world, as well as earn extra income. On his website, Pierrot writes: “Passionate to paint, I started my own decorating company GrafoDeco. I paint everything (walls, canvas…) and of all sizes.”

A corner can also turn into a scary swamp.

The author takes random pictures with his own work.

Pierrot said he didn’t go to any art school or anything like that. He started out like most street artists, painting on the street. He said he learned everything he knew by himself, or from other artists. In a previous interview, Pierrot mentioned that he was inspired by a schoolmate to start creating art.

More than just street art, Pierrot also creates interactive optical illusions. They are very difficult to do, because they require an understanding of perspective, light, materials… His works show that street art is not always just vandalism, it is also a Great art form and requires a lot of technique.

And he found a way to make his works more interactive with people. Sometimes, Pierrot himself dresses and poses with the work, and that’s often one of the reasons his work goes viral on social media.

Dinosaurs have always been something that many people aspire to see.

Another impressive public work by Perriot.

What do you think when you see this lion right after the corner?

This photo requires a single angle.