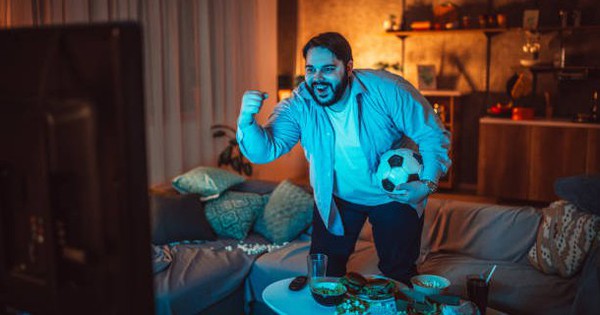 Surely many people know this caricature: TVs keep getting thinner with the times, and our waistlines are getting bigger and bigger. At first, everything sounds unrelated, but science has actually proven:

Spending a lot of time in front of a TV makes us fat.

Research published in the journal JAMA found that for every two hours of TV watching per day, an adult’s risk of obesity increased by 23%. Along with that was a 20% risk of diabetes, 15% risk of developing cardiovascular disease and 13% risk of premature death.

Two hours is the length of a football game, including the break. Not to mention, each match in this year’s World Cup has been extended by FIFA, making the time for players on the field to exceed 100 minutes.

Another study published in the British Journal of Sports Medicine found that every 2 hours of TV watching reduced you by 44 minutes in your lifetime. In comparison, smoking a cigarette only shortens your life by 11 minutes.

So what paradox is going on here? Why can a sporting event, dedicated to human health, cause us to gain weight and weaken us? How to fix something wrong that happened somewhere?

Why does TV make us fat?

The first study to investigate the link between obesity and TV viewing time was conducted in 1985 by the Harvard TH Chan School of Public Health, USA. This was a time when television was still a medium of communication. mainstream, fresh and most attractive.

TVs then took up society’s time like how phones, Facebook, Youtube attract us now. Children and adolescents are particularly affected by TV, because of the time they spend on it.

Children can watch TV all day at home, so much so that some scientists have wondered: If children keep watching TV like that, will there be any effect on their development? (A similar question is being asked with Youtube and TikTok in this day and age.)

To begin with, many researchers designed experiments that followed children for long periods of time. They found that children who spend too much time watching TV can have reduced attention span, delayed language development, and TV also affects children’s executive function and communication.

Besides, one of the alarming findings that research in the 1980s found, is that TV can make children fat. The earlier children were shown TV, had a TV in their bedroom, and spent more time watching TV, the more likely they were to gain weight than their peers.

The accumulated evidence was enough then that some schools in the US included a new subject in their curricula called “Turn off the TV”. The subject is designed into 18 periods spread over 6 months to help children in grades 3 and 4 control their TV viewing habits, thereby avoiding the effect of weight gain due to the influence of TV time.

But why can children who watch a lot of TV gain weight? It turns out the reason isn’t so mysterious. The screens simply keep children sitting for too long indoors, depriving their lives of outdoor physical activity that is essential for healthy development.

Plus, research shows that advertising for fast food, soft drinks and processed products on TV can influence children, making them more likely to choose foods with unhealthy calories, high in sugar and fat. .

Adults are – ironically enough – affected by the same effect. However, it was not until around the 2010s that evidence linking TV viewing time with obesity risk in adults was established.

The cause comes from our conceit. We think that when we are old enough and aware, we can self-regulate our behavior and reduce the harm that comes from TV. But that’s not the case.

Liluan Cheung, lecturer in the Department of Nutrition, Harvard TH Chan School of Public Health said:We now have convincing evidence in adults that the more television they watch, the more likely they are to gain weight, become overweight or obese.”

Any adult can become a child sitting in front of the TV. They continued their sedentary lifestyle, inactive, sitting or lounging on the sofa and glued to the television program.

The act of watching TV also frees our hands to make us want to look for something to eat. Same sitting, but research in the journal Pediatrics shows that watching TV creates a weight gain effect that is superior to sitting using a computer, phone or handheld game device.

In addition, most of the foods we choose when enjoying a TV show are also less healthy foods. A study by the University of Liverpool found that food advertising on TV can influence adult choices.

It doesn’t necessarily make us buy the product being advertised, as a child would claim. But the ads will make us crave sweet taste, so people will tend to choose to eat foods that are high in sugar, fat and salt available around them.

Research in the American Journal of Clinical Nutrition indicates an even more subtle effect. It shows that when you eat while watching TV, the brain can lose focus and forget how full you feel.

To not gain weight during the World Cup season

So the reason has been pointed out:

1. Watching TV makes us sit in one place for too long

3. Eating while watching TV can make us overeat

All three of these behaviors lead to the same consequences, causing you to gain weight during the World Cup. And the only way to fix it is to limit the causes one by one.

In a manual called “Health tips for World Cup fans“, the Hong Kong Ministry of Health offers some tips that you can apply. First, they recommend that spectators watching football matches on TV should stretch and move often.

Alternatively, you can do some exercises in place, such as squats, lunges, calves, push-ups, swings or whatever moves you can think of. If you have a stationary bike or treadmill at home, it would be ideal to place them in front of the TV and work out while enjoying the World Cup.

The next advice from the Hong Kong Department of Health is to choose healthy snacks, such as potatoes, baked sweet potatoes, unsalted nuts, low-fat popcorn, instead of chips. commercially available, butter or chocolate popcorn.

Ideally, you should choose fresh fruit as a snack while watching the World Cup. In terms of drinking water, choose filtered water or a homemade drink like lemonade instead of ready-made drinks containing a lot of sugar, or beer or alcoholic beverages.

When eating and drinking during a soccer game, be mindful of your intake. To do this, calculate in advance the amount of calories you want to consume for the day.

Remember, whether you gain or lose weight is entirely dependent on your calorie deficit from physical activity minus the calories from the food you eat. For example, a typical snack, consisting of a bag of chips, a soft drink, or a beer, or a slice of pizza can load you up with 1000 kcal.

To burn all these calories, a person weighing 70 kg needs to run continuously for about 1 hour and 15 minutes, at a speed of 8 km / h to complete a distance of 10 km. Don’t forget that even if you’ve chosen healthier snacks, you still have to count calories.

For example, a bag of peanuts weighing 85 grams is a source of fiber, protein and healthy fat that can still load your body 500 kcal, making you have to run continuously for more than 30 minutes to burn. But how long does it take you to finish that bag of peanuts, perhaps no more than 10 minutes.

So what’s the next piece of advice? Don’t gobble up any of your junk foods quickly. While watching a football game, enjoy your meal slowly.

Remember TV can distract you and eat more, fuller than necessary. Therefore, you need to eat slowly, this will help you easily control your eating behavior.

Read moreIt takes 10 million years for life on Earth to recover from "The Great Dying".

Finally, you absolutely can choose not to snack while enjoying World Cup matches. This is probably the safest option. But remember, most of the key matches of this year’s World Cup will take place in the late time frame, according to Vietnam time.

That means you can go hungry between 11 p.m. and 4 a.m., which is around the time football games take place. To curb midday hunger, eat a meal in the evening with plenty of protein instead of carbohydrates.

Read moreHow to turn a photo into a coloring photo

On the one hand, protein in your diet will keep you full longer, while reducing carbohydrates will help you feel less sleepy so you can fully enjoy the game. Wishing you a World Cup without getting fat!