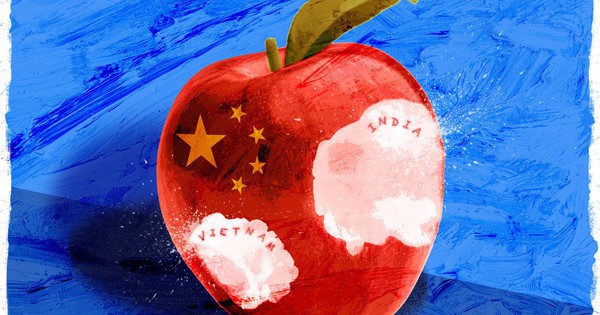 Four days before Christmas 2022, as China struggles to weather an explosion of Covid-19 cases across the country, the world’s largest electronics maker has quietly finalized a plan to allocate some of its operations. iPad and MacBook production to Vietnam.

According to SCMP, Foxconn’s move – which was outlined at the end of 2020 – will become a reality this year with the first products expected to ship at the factory located in Bac Giang in early May at the earliest.

Although neither Foxconn nor Apple officially confirmed this change. However, the above plan is in line with the strategy of making Vietnam the largest final product assembly site outside of China. Foxconn has employed more than 60,000 employees in Vietnam. Last year, the group announced an investment of $270 million to establish a new branch here.

Apple’s supply chain also shifted to other countries, including India. Wistron partner started assembling iPhone SE here from 2017. In September, 2022, “apple defect” strengthened plan B, announcing iPhone 14 production in the South Asian country after only a few months of release. This is an important step forward, although the mass production schedule in India is still about 6 weeks behind China. According to analyst Ming Chi Kuo, the gap has improved significantly. Therefore, he predicts that the two countries will produce iPhone 15 simultaneously this year.

According to Bloomberg’s analysis, China is currently still higher up in Apple’s global supply chain. About 121, or 17.7% of Apple’s suppliers are concentrated in China, operating 2,360 factories, or 19.3%. Thus, China becomes Apple’s largest global supplier, second only to the US.

The developments during Covid-19 in China have accelerated Apple’s supply chain diversification. According to analyst Luke Lin, India could produce 50% of iPhones by 2027 compared to less than 5% currently. JP Morgan analysts predict India will be responsible for 25% of global iPhones by 2025.

iPhone production in India has doubled from April to August 2022 compared to the same period in 2021. Meanwhile, Apple’s share of MacBook and AirPods production is also forecast to increase as contractors, including Chinese contractor, speeding up factory opening.

China is still Apple’s key consumer market with strong sales growth. According to data from research firm Canalys, the company recorded a 36% increase in the third quarter of 2022 despite every domestic competitor – from Oppo to Xiaomi – having sales decline,

Screen maker BOE also beat South Korea to win the majority of iPhone 15 and iPhone 15 Plus screen orders in 2023, a sign of the interdependence between Apple and China. According to Reuters news agency, BOE intends to invest 400 million USD in two new factories in Vietnam.

Another Chinese partner, Luxshare, has been selected by Apple to assemble some iPhone Pro models. Apple also rotates orders between different countries such as between China and Vietnam Foxconn factories.

The key question is how long it will take for Indian suppliers to meet Apple’s standards. Apple has been working with Chinese suppliers for many years, and this cannot be achieved in a short time. If we take the “towards to perfection” catalyst from the market, it could lead to standards sliding down the Apple supply chain itself.