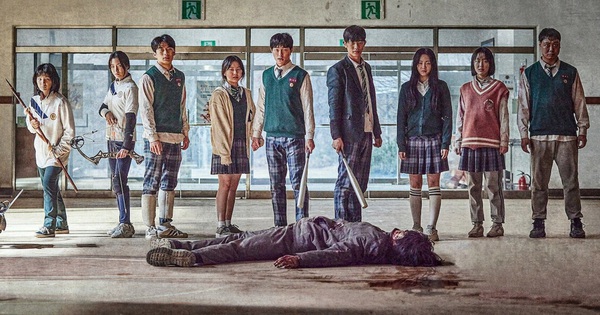 Recently, Netflix released the first trailer for the series All of us are Dead, the next zombie-themed post-apocalyptic blockbuster from Korea. After the great success that works of the same genre such as Train to Busan, Alive or Kingdom left behind, the audience can completely put their trust in All of us are Dead as well as their ability to exploit the zombie theme. cinematic land of kimchi.

[Vietsub] Korean cinema continues to release another zombie-themed blockbuster – All of us are Dead.

All of us are Dead will be set at Hyosan High School. Similar to other zombie blockbusters, the agent causing this pandemic of the walking dead is also a mysterious virus that spreads from animals to humans. Based on the trailer above, it can be seen that the first case of the disease came from a female student named Hyeon-ju after being bitten by a virus infected mouse, and from there, the pandemic began to spread at a rapid rate. degree of dizziness.

The trailer also shows that it is possible that biology teacher Lee Byung-chan was the one who contributed to the research and creation of this virus strain. But even more frightening, he did not feel regret for his experiment, but on the contrary was pleased to see a zombie epidemic invade the entire school where he taught: “I’d rather let him live like a monster than die like a normal person“.

It is easy to see that All of us are Dead is heavily inspired by Train to Busan. Not only directly referring to director Yeon Sang-ho’s once-popular blockbuster, this film also has many scenes similar to its predecessor, such as the scene of zombies crammed together to the point of breaking. windows, collapsed and piled up.

All of us are Dead is adapted from the webtoon series Now At Our School by author Joo Dong-geun. The series features many familiar names to K-drama fans such as Kim Byung-chul, Jung Yi-seo, Cho Yi-hyun, Park Ji-hoo, and Yoo Chan-young. Lee Yoo-mi, the young star emerging from the hit series Squid Game (player 240, Ji-yeong) will also appear in this film in an undisclosed role.

In recent years, Korea has become a formidable name in the world film market, even challenging Hollywood’s top blockbusters. After the big buzz named Train to Busan in 2016, they continued to surprise everyone with the feat of Parasite at the 2020 Oscars ceremony. 1 later, Korea continued to cause fever with the survival game. Squid Game – is currently the most popular series of all time on Netflix.

That is why All of us are Dead is expected to continue the successful momentum that Korean cinema has built in the eyes of world audiences over the past few years. This movie will officially air on Netflix on January 28.