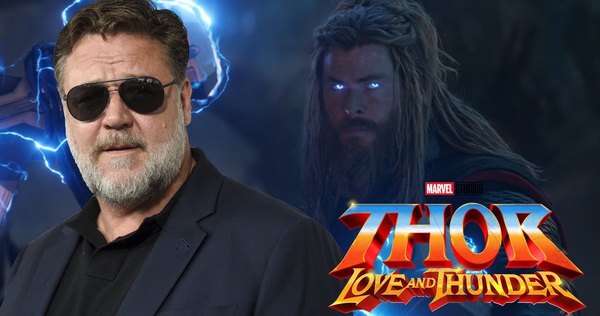 Thor: Love and Thunder is one of the movies that received a lot of fan attention in the blockbuster lineup of MCU phase 4. This is considered the last time the thunder god Thor (Chris Hemsworth) appeared in the main character on the big screen, closing an impressive 10-year journey with this vast movie universe. In addition, the cast information also especially excited the audience with the return of familiar faces such as Natalie Portman, Tessa Thompson, Chris Pratt, and other big names, most notably Christian. Bale and Russell Crowe.

If the role of Bale has been revealed for a long time – the assassin Gorr the God Butcher, then Russell Crowe’s role in Thor: Love and Thunder remains a secret to this day. In an interview with JOY 94.9, the veteran actor revealed that he will become the god Zeus of the MCU – inspired by the very famous character of the same name in Greek mythology. Sharing with the talk show Joy Breakfast with Murphys, the male lead won the Oscars gold statue with the classic blockbuster Gladiator humorously said: “I’ll hop on my bike and head straight for Disney Fox Studios (for filming). And around 9:15 onwards, I will be Zeus! It’s my role in Thor“.

In fact, Zeus has appeared in Marvel comics (especially Thor’s storyline) for decades under the creation of legendary duo Stan Lee and Jack Kirby. Therefore, many fans believe that the ultimate god of Olympus should have appeared in the Marvel universe a long time ago, especially when Thor has 3 separate movies, plus 4 Avengers movies. and many cameos before that.

For those of you who have read through the original comic book, the appearance of Zeus in Thor: Love and Thunder may not be too surprising information. If Christian Bale was chosen for the role of Gorr the God Butcher, Marvel Studios will certainly add more gods to its upcoming blockbuster. Gorr’s greatest, and almost exclusively, goal is to eliminate all the gods in the Marvel universe, who have left his family in spite of his plea for help (you can find better understand this villain here). Now, fans have one more reason to “wait” for this movie: It is a one-to-one confrontation between Gorr and Zeus, performed by two actors who are too classy.

If Christian Bale will play Gorr the God Butcher, it is likely that besides Zeus, Thor: Love and Thunder will welcome many other famous gods of the Marvel universe.

Currently, Thor: Love and Thunder is in the process of shooting in Australia, with the release scheduled for May 6, 2022, depending on the situation of the Covid-19 pandemic. This movie will still be “molded” under the talented hands of writer / director Taika Waititi, promising the elements of “laughing can not pick your mouth” in Thor: Ragnarok will once again return to the big screen of MCU. In addition, director James Gunn also consulted in the production process so that the characters in his Guardians of the Galaxy (mainly Star-Lord) will appear in a proper and reasonable way.