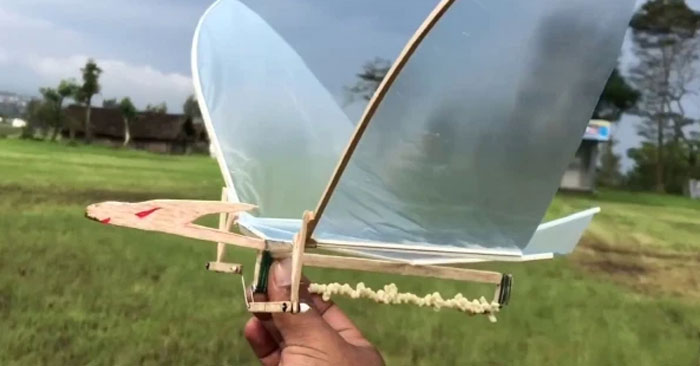 Hobi Cerdas has created a model that resembles a prehistoric flying dinosaur with only easy-to-find materials and the special thing is that this small model can flap its wings to fly, making many viewers excited.

This toy dinosaur has a skeleton made from balsa wood, which is quite hard for a solid and good construction. Some connecting rods are made from ice cream sticks. After completing the frame, Hobi Cerdas used a thin plastic film to attach to the wing with spray glue. This guy used a twisted elastic band to act as a mechanism to transmit the momentum to the wings, allowing it to flap up and down, helping this toy to fly.

After completing this simple and fun toy, Hobi Cerdas gave it a try to fly. After the first failed attempt to take off, the toy dinosaur was able to fly a few laps in the sky on the second attempt. This time he flew long enough to have an encounter with some trees before he took off. landed on the ground.

Below is a clip recording the process of making and testing a flying dinosaur, invite you to watch. This video has brought this Youtuber more than 4 million views and thousands of comments.