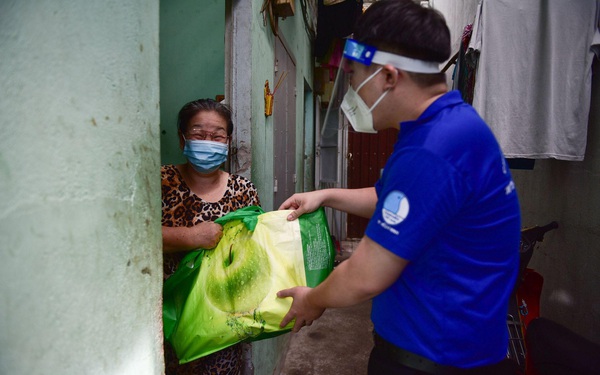 Following the journey of giving 2,000 “Gratitude Gift Baskets” to students, workers and employees… in mid-July, the second gift-giving session was held from July 24-25 within the framework of the Program of Love in the Season of the Epidemic, with 3,000 gift baskets for difficult circumstances in isolation and blockade areas in 6 districts in Ho Chi Minh City.

“Gratitude gift basket” is a special activity in the program “Gratitude in epidemic season” coordinated by Tuoi Tre newspaper, Ho Chi Minh City Union of Commercial Cooperatives (Saigon Co.op) and Shopee e-commerce platform. implemented, within the framework of the Cashless Day 2021 series of events. In each of these gift baskets are essential items for daily meals such as rice, cooking oil, fish sauce… produced by Saigon Co. op offers are being sold on the Shopee app for VND 145,000/gift basket.

On July 25, Binh Chanh District Youth Union also organized to give 500 gift baskets to disadvantaged households at the boarding house consisting of 33 households in hamlet 1A, Vinh Loc B commune. At the same time, 500 gift baskets of gratitude were donated by the Union members, volunteers transported to blockade posts located deep in small branch roads in Can Gio and distributed to 24 households with about 80 people in An Phuoc hamlet, Tam Thon Hiep commune.

Mr. Doan Truong Quang (member of Standing Committee of the Youth Union) and Mr. Nguyen Minh Kha (Deputy Secretary of the Can Gio District Youth Union) presented “A gift basket of gratitude during the epidemic season” to households under blockade in An Phuoc hamlet, commune. Tam Thon Hiep, Can Gio district.

Households in the blockade area in An Phuoc commune, Tam Thon Hiep commune, Can Gio district with “Gift baskets of gratitude” during the epidemic season.

During the stressful time of the epidemic and the city is applying Directive 16, the gift giving is done seriously and in accordance with regulations.

At gathering points in districts, volunteer squads organized by district unions and unions will continue to bring gift baskets to inns, blockade areas and hand them to people.

Individuals and units wishing to help disadvantaged households during the epidemic season can order a “Gratitude Gift Basket” right on the Shopee shopping app and pay through an e-wallet ShopeePay with just 3 easy steps here. The list of supportive buyers and the number of gift baskets recorded on the Shopee shopping platform will be published on Tuoi Tre newspaper.

The milestone of 10,000 gift baskets is very close, let’s continue to spread love and share with difficult situations.