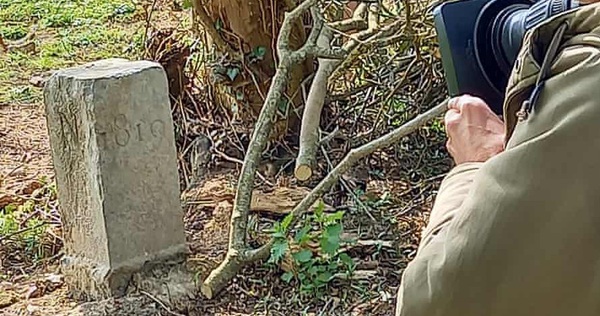 That rock is located on the border between the two towns of Bousignies-sur-Roc (France) and Erquelinnes (Belgium). This place was originally French, but was annexed to the Netherlands at the Vienna Congress after Napoleon was defeated at the Battle of Waterloo in 1815. Then, when the Treaty of Kortrijk was signed in 1820, the border between France and The Netherlands was established, and after the independence of Belgium in 1830, it was inherited as the border between Belgium and France.

The stone has marked the border between the two countries since the Battle of Waterloo.

However, a farmer in the town of Erquelinnes is said to have “accidentally redrawn” the border between the two countries, moving this 200-year-old rock. He explains the reason for the action that the rock blocked his tractor’s path.

It was discovered only two weeks ago, when a local amateur historian was walking in the woods near the village of Erquelinnes, discovered that the stone from 1819 had been displaced to 2 , 29 meters.

The Franco-Belgian border, stretching 390 miles (620km), was formally established under the Treaty of Kortrijk in 1820.

While enjoying the expansion of his town, David Lavaux, mayor of Erquelinnes, has said that the farmer has a legal obligation to move the rock that marks the border back to its original location, for the best. should not “create a diplomatic incident”.

“We’re not interested in expanding a town, or country. He’s made Belgium bigger and narrowed France. It’s not a good idea.” Lavaux told French television channel TF1. “I was very happy, my town was a bit bigger. But the mayor of Bousignies-sur-Roc definitely disagrees.”

The border of the two countries has been moved because a rock is blocking the path of a farmer’s tractor.

The mayor also said that if the farmer shows goodwill, he will have no problem, because everyone wants to resolve this problem in a friendly way. However, if this farmer does not comply, he may be subject to criminal liability. The matter could then be referred to the Belgian Foreign Ministry and possibly convene a border committee between France and Belgium, which has been inactive since 1930, just to deal with demarcation. exactly.