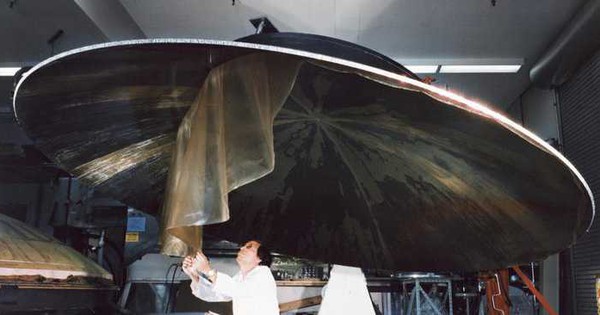 In May, NASA scientists said the Voyager 1 spacecraft was sending back incorrect data from its “attitude control system”. This mysterious incident is still ongoing, according to the mission’s engineering team. Accordingly, in order to find a solution to the problem, engineers are having to go back and study the ship’s manual from 45 years ago.

Voyager 1 and its “twin” Voyager 2, launched in 1977 with the original purpose of carrying out a travel mission, studying Jupiter, Saturn, Uranus, Neptune and the moons their respective.

After nearly 45 years in space, both spacecraft are still operational. In 2012, Voyager 1 became the first man-made object beyond the boundary of the Sun’s influence. It is currently about 23.3 billion kilometers from Earth and sends data back to our planet from outside the Solar System.

“Nobody thought it would last that long,” said Suzanne Dodd, project manager for the Voyager mission at NASA’s Jet Propulsion Laboratory.

Voyager 1 was designed and built in the early 1970s, and so far, the current engineers of the Voyager mission have only a few documents remaining related to the ship – command vehicle, technical terminology for The paperwork contains details of the spacecraft’s design and processes – from the early days of the mission, other important documents may have been lost or misplaced.

Voyager 1 was built by the Jet Propulsion Laboratory. The hull has a hollow hexagonal shape with 10 compartments on the sides to hold the electronics, the hollow in the middle is used to place the fuel tank. The ship is equipped with 11 scientific instruments to study objects such as planets as it flies by.

During the first 12 years of the Voyager mission, thousands of engineers worked on the project, according to Dodd. “When they retired in the 70s and 80s, the scientific community seemed to have ‘forgotten’ the establishment of a project document library. Accordingly, engineers accidentally brought relevant documents with them. to the project home with personal belongings when leaving work,” added Dodd. In modern missions, NASA has learned from experience and tries to keep records and documents in a more methodical and scientific way.

For Voyager 1’s latest glitch, mission engineers had to specifically search for relevant documentation thanks to the names of engineers who helped design the attitude control system. “It’s a time-consuming process,” says Dodd.

So far, Voyager engineers have not been able to find the root cause of the malfunction, mainly because they haven’t been able to reset the system yet, Dodd said. The mission’s engineering team now believes that this error stems in part from the “aging” of the ship – “Not everything works forever, even in space”.

Voyager 1’s radio communications system is designed to operate outside the Solar System. The system consists of a 3.7m diameter dish antenna with a large gain to transmit and receive radio waves from three Deep Space Network stations on Earth. The spacecraft transmits data back to Earth via channel 18 of the Deep Space Network station, using frequencies of 2.3 GHz (S Band) and 8.4 GHz (X Band). Signals from Earth are transmitted to Voyager 1 over a frequency of 2.1 GHz.

Despite the spacecraft’s orientation problems, Voyager 1 still receives and executes commands from Earth, its antenna still pointed towards us. “We didn’t see any decline in signal strength,” says Dodd.

And also because of its rather large age, NASA engineers have taken many measures to manage Voyager 1’s energy in the hope that it can maintain operation until 2030.

During its years of operation, Voyager 1 has provided us with a wealth of data, from the discovery of unknown moons and rings to the first direct evidence of anomalous physical phenomena. . The Voyager mission has helped scientists better understand the universe. “We wanted the mission to last as long as possible, because it provides us with a lot of very valuable scientific data,” Dodd said.

“It’s remarkable that both of the mission’s spacecraft are still up and running – although there’s a bit of a glitch right now, both are still sending back a lot of valuable data,” Dodd said.