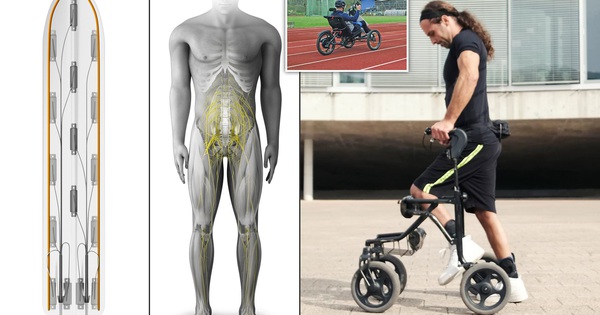 For a paralyzed person like Michel Roccati, the life of self-control and freedom ended one fateful day, after an accident in 2017. Roccati recalled he was riding a motorbike when an animal jumped out from the side of the road. .

He immediately reacted to avoid it, but the car skidded and when he regained consciousness, Roccati found himself lying on the pavement, motionless. It didn’t take a moment for the 26-year-old to realize something bad was happening to him.

Roccati struggled to get up, he also tried to roll over to the curb. But after all that effort, Roccati’s body didn’t respond at all. He has been officially paralyzed ever since.

For the next 3 years, the young Italian’s life was completely dependent on a wheelchair. Roccati fortunately recovered the muscles of the upper body, but the lower body from the waist down including the legs was completely paralyzed. Even so, he spent all his time practicing.

Roccati reminds himself every day that if he tries, everything will return to normal. The young man never allowed himself to stop. But during the three years after the injury, the rehabilitation methods that Roccati tried were unsuccessful.

That all changed in 2020, after Roccati decided to participate in a clinical trial of a spinal electrode implant. It is precisely called Epidural Electrical Stimulation (EES) – or “epidural electrical stimulation system“.

Medical breakthrough: Spinal cord implantation helps people who have been paralyzed for 3 years get up and walk after only 1 day

The groundbreaking method was co-developed by Jocelyne Bloch, a neurosurgeon at Lausanne University Hospital, and Gregoire Courtine, a neuroscientist from the Swiss Federal Institute of Technology.

Bloch and Courtine said that paralysis in general, and of accident patients in particular, is caused by a broken connection between the brain and nerves to their extremities. Most of these injuries are something that modern medicine cannot heal.

However, in ruptured nerve bundles, there will still be a small number of nerve roots that are still alive. They simply do not work because they have not received stimulation signals from the brain for a long time.

Thus, Bloch and Courtine developed an electrode array implanted into the spinal vertebrae, which connect to these nerve root terminals. For people with lower limb paralysis like Roccati, electrodes will connect to the roots of the lower back, amputee, lumbar and lower chest area. These are nerve endings that control movement of the legs and lower body.

On the other side, electrodes are connected to wires leading to a mini computer implanted under the skin of the patient’s abdomen. This battery-powered machine is responsible for generating an electric current, simulating the brain’s electrical current to stimulate nerve roots in the spinal cord.

The stimulation program is programmed individually by Bloch and Courtine for each patient, depending on the vertebrae and nerves they are affected. And according to the specific activity, the programs also generate different stimulating electrical signals.

For example, Roccati can use a carry-on tablet, choosing a pattern that stimulates walking. The tablet connects wirelessly to a machine implanted under the skin of his abdomen, which he controls to create electrical stimulation that simulates walking.

These signals flow into electrodes on the other side of the wire, stimulating the nerve endings that connect to the lower limbs, allowing Roccati to stand up and walk again.

Bloch says the implant is so simple and effective that essentially, as soon as the patient has the electrodes and EES implanted, they can move their legs, upper body or even step down on the operating table and started to walk.

“The first steps may not be perfect right away, but the patient can start training very early to regain a flexible gait.‘, said Bloch. For example, the day after surgery, they were able to practice walking on the double railing.

They were also able to walk again after only 1 day. After a few more months of practice, the patients were able to climb stairs, cycle, swim and row again. “Now, I can stand continuously for 2 hours and walk almost 1 km without stopping.”Roccati said.

With the ability to regain mobility at the age of 29, the young Italian has much more confidence. He said he was able to look people straight in the eye while standing with them at the bar.

With the return to exercise, Roccati’s life is also less dependent on carers. Now, he can stand in the shower by himself and enjoy the flow of water in the shower all over his body.

Bloch and Courtine say they’re trying to further develop their electrodes, shrink them in size, and improve the software and hardware for the minicomputer that generates electrical pulses.

To do that, they’re working with ONWARD, a network of scientists, engineers and neurologists working on therapies for spinal cord injuries. Bloch and Courtine’s plan is to be able to create a commercial version of the therapy and test it in 50-100 patients next year.

As for the price, Courtine is not sure how much the commercial version of EES will cost. But he says its price will be similar to other nervous system stimulation technologies, such as deep brain stimulation for Parkinson’s disease.

If so, it can be estimated that the price a paralyzed patient must pay to regain the ability to walk is 180,000 USD, equivalent to 4 billion VND.