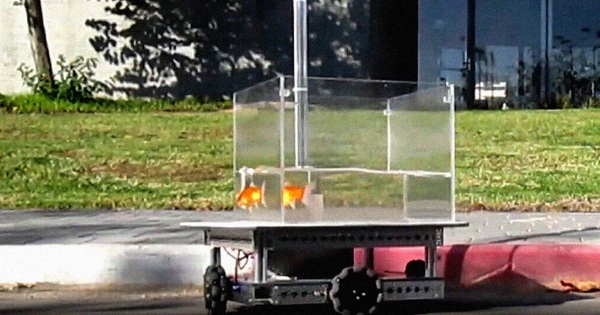 The development of technology not only benefits humans in many ways, but also has positive effects on animals. Now, besides 4-legged pets like cats and dogs, goldfish can also roam freely thanks to a special device – a fish tank mounted on a wheel system, which can move by itself. of the fish inside.

This is the invention of a group of scientists from Ben-Gurion University, called “Fish Operated Vehicle” (FOV). It is actually a special type of 4-wheel vehicle that integrates a computer, LiDAR system and a relatively large glass water tank. All will support and equip navigation skills for the goldfish inside so that the computer can convert their movements into the movement of the vehicle and help the vehicle move.

The results were also amazing: The goldfish in the test was able to make the FOV move to its target smoothly, and in return, it was rewarded with some special food particles for the target. fish. Initially, it took about 30 minutes to determine the destination, while also having to avoid obstacles as well as dead-end roads. However, at the end of the test, it took less than 1 minute to complete the same distance.

From the results obtained, the scientists came to the conclusion that goldfish have surprisingly excellent navigational abilities, even when their ideal environment is limited. In the official paper, published in the journal Behavioral Brain Research, they wrote: “These results show that goldfish can use their perception and navigation skills in both terrestrial environments, supporting the hypothesis that animals may possess similar abilities regardless of their size. belonging or discriminating“.