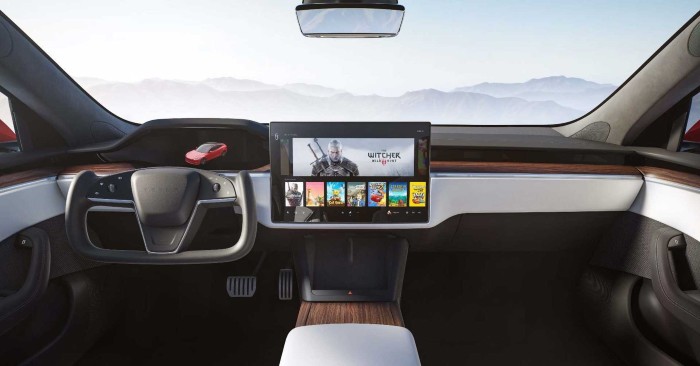 According to what was announced, the Model S Plaid is equipped with an AMD Ryzen processor and an AMD RDNA 2 discrete graphics card. Combined, they give the car the same processing performance as the PlayStation 5 (PS5) console. ) by Sony. Inside the car there is also a game controller branded Tesla.

“Model S Plaid is equipped with state-of-the-art computing technology, a top-notch infotainment system on par with a PlayStation 5”, Elon Musk announced. “It can run Cyberpunk and heavy games at 60fps.”

Why would you need a car with a PC that can deliver PS5-like gaming performance? The answer, according to Elon Musk, is very simple.

“Think about a future where cars are fully self-driving, where entertainment will become more important. When that happens, we hope to see people compare them. Compare the ability to play AAA games (the top games that require processing power and graphics) with powerful PC models, PS5 and Xbox Series X”, Elon Musk explained.

As you can see, Elon Musk is a very long-term thinker. He envisions a future where people can step into a car, set a destination, and the car will take them away automatically. At that time, the people sitting in the car can have fun by playing together a few games, solving some bosses or watching movies…

In terms of performance, the Model S Plaid is boasted by Elon Musk as the most efficient car ever produced. Model S Plaid has a capacity of 1,020 horsepower and the ability to accelerate from 0 to 100km / h in just 2 seconds. The distance traveled after each full charge of the Model S Plaid battery is 630 km.