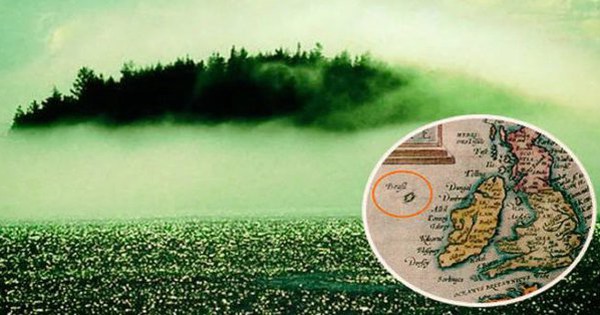 Folk stories in many parts of the world say that all around us there are many strange and mysterious areas. One such place is an island on the west coast of Ireland, shrouded in thick fog and seen only once every seven years.

In Irish oral stories it is said that this island is an island in the mist and it will disappear when people approach. Then these stories appear in printed Irish folklore books, and you definitely won’t know which one to read first because they are all very interesting. According to DR McAnally’s 1888 book Irish Wonders, the floating island was sighted by residents of County Cork on July 7, 1878.

The number seven has appeared three times and this is very symbolic as the number seven is considered a spiritual number indicating a strong spiritual presence behind the matter. It can also indicate encrypted information, as in alchemical texts. In any case, its strange appearance was described in Irish Miracles as follows:

“On the afternoon of Sunday, July 7, 1878, the inhabitants of Ballycotton in County Cork were greatly excited by the sudden appearance of an island far off the coast of which it was not known. The men of the town and of Ballycotton Island were fishermen and they were all too familiar with the sea and the land.The day before, they had sailed and headed to where this strange island now appeared, and they sure it’s the best fishing ground they have.

Still, they looked further, and their astonishment grew, for the day was clear, and the island was as plainly visible as the hills to the north. In some places it is rough, in others it is densely wooded. At one end, it rises almost steeply above sea level, at the other end, it gradually eases.”

The island appeared on the map until at least 1873

Hy-Brasil has appeared in all sorts of legends, including giant black rabbits living with a sorcerer, gods lurking in the fog, lost civilizations and of course UFOs. Although it has never been discovered, this ghost island has been on maps from the 14th to the 19th centuries. Historians believe this is because cartographers were unable to check all of them. locations and thus sometimes inadvertently put these rumors on their maps.

An island called Bracile was first marked on a portolan map in 1325 by the Mallorca cartographer Angelino Dulcert. The Venetian cartographer Andrea Bianco included an island named Insula de Brasil on a map in 1436. He assigned it to a group of islands in the Atlantic Ocean, and for a time, Insula de Brasil was identified. identified as the Terceira island of the Azores today, on which there is a volcano that people still call Monte Brasil.

On the Catalan map of 1480, there are even two islands named “Illa de brasil”, one to the southwest of Ireland and one to the south of “Illa verde” or Greenland. The Spanish cartographer Diego Gutiérrez included Isola de Brasil on his 1562 map. A map by the Flemish cartographer Abraham Ortelius from 1570 shows an island called Brasil in west-central Ireland.

A 1630 chart by Portuguese cartographer João Teixeira Albernaz depicts the circular island bisected by a river and called Do brasil. A map by British cartographer Thomas Jefferys from 1753 showing the island to the southwest of Ireland and calling it the “Imagine Island of O Brazil”, suggesting that cartographers had begun to suspect about the existence of the island.

And on the map of the French cartographer Guillaume de L’Isle in 1769, the island is just a rock called Rocher de Brasil (Stone Brasil). The island of Brazil continued to appear on maps until 1873 when it was last shown on British Admiralty charts.

Hy-Brasil has nothing to do with Brazil or reality

The origin of the names Brasil and Hy-Brasil is unknown, but according to Irish legend, they are thought to have come from the Irish Uí Breasail, one of the ancient clans of northeastern Ireland.

There have been many recorded expeditions to the discovery of this island, apart from their fanciful descriptions, in fact no exact basis has been verified. In 1480 and 1481, two explorers set out from Bristol, spending more than two months sailing around the Irish coast in search of this mysterious island. Although both expeditions are said to have been unsuccessful, there is a report by a Spanish diplomat in 1497 who recalled “men from Bristol found Brazil”.

Another account from 1629 by a French explorer, M. de La Boullaye Le Gouz, tells how some sailors discovered Hy-Brasil. He also mentioned a letter written by a man in Derry to a friend in England, describing how Captain John Nisbet and his crew were stranded on Hy-Brasil and found a long time ago. The old station is empty. After they had gone to sleep for the night, they were suddenly awakened to “see a very serious old man and ten men following him, topless (as if they were his servants) to the seashore. where the ship lies”.

The mysterious man held a welcome party, at which he revealed his identity. He said the island was called O’Brasile and his ancestors were once princes, but then an evil witch wiped them all out, leaving only a few surviving family members behind. behind the castle, and make the island invisible so that no one can find it. The man also distributed wonderful gifts to the crew, who happily returned home, but so far the island has not been seen.