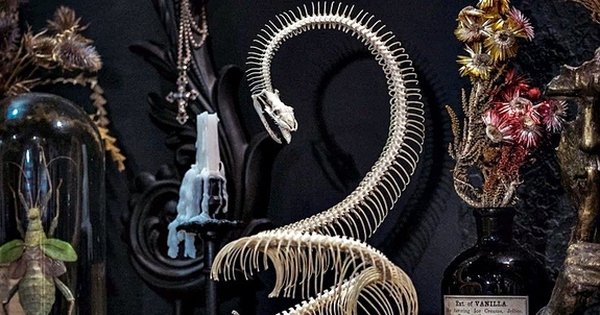 Nghia Nguyen (HCMC) has been collecting animal bones for nearly 10 years, starting after a trip to Thailand and seeing people displaying all kinds of bone and stuffed specimens in the internal business area. Furniture at Chatuchak market, Bangkok. When he returned home, Mr. Nghia cherished the idea of ​​owning his own collection and so far, he has more than 100 specimens of different animals in hand.

Nghia Nguyen has a hobby of collecting animal bone specimens.

Most of these unique decorations were collected by Mr. Nghia in the country or bought from Thailand. Among these, there are very rare specimens, such as a bone specimen of a horse of perfect height, for example.

The work that is most favored by Mr. Nghia, the most beautiful place in the house is the skeleton of a python. He bought it from a person who specializes in making specimens for museums with specimens from a longtime python breeder. The python was sick and died, but its skeleton after undergoing processing is very white and beautiful and is also arranged in a soft, artistic position on a black base.

Among the items that were difficult to obtain, Mr. Nghia mentioned the specimen of the Mahi Mahi fish. This is a fish that usually lives off the coast of temperate seas, quite large in size. When he found the specimen of this fish, it took a lot of work for Mr. Nghia to be able to move it back to Vietnam, due to its brittle and easily broken bones.

The specimen of the python is hung in a beautiful place in the house.

Using bone and animal-stuffed templates to decorate the house is a European style because of its magical beauty, but no less mysterious and attractive. Normally, the homeowner will leave a few specimens in the house as a highlight, but the case of collecting and displaying as many as Mr. Nghia is not everywhere.

The meaning of this template hobby is that instead of leaving it outside and rotting, animal carcasses will be brought back to be processed and prolong their presence in the world. In the cafe space of about 30m2, Mr. Nghia arranges skeletons of snakes, fish, bats, horses… on the wall, on wooden shelves, in glass cabinets. Meanwhile, stuffed specimens of large birds such as hawks, eagles, owls, crows, peacocks… also have their own “prime” positions.

In fact, in Vietnamese culture, animal bones are sometimes considered unlucky because they carry a lot of negative energy, so collecting animal specimens seems to be new and picky for players. However, the community playing bone specimens on Facebook also began to add more members, becoming a place to exchange knowledge and experience.

Not only buying bone specimens from Thailand, Mr. Nghia Nguyen also processed many animal carcasses into specimens. To make the finished product, Mr. Nghia has to do many stages. The first is to filter out the meat to avoid damaging the skeleton. This is followed by soaking the bones in a chemical solution, extracting the marrow, soaking and drying in the sun. The final step is to assemble the bone fragments into a complete block.

At each step, players need to do it carefully to avoid broken bones. If it is possible to make the bones clean and dry, then it will be easier to preserve the bones later, and the bones will also be whiter and more perfect. Mr. Nghia often uses animal bones from familiar sources. In it, there is a specimen of a ferret that is a pet of a close friend. After the ferret died, that friend gave it to Mr. Nghia and when it became a specimen, he placed it in a beautiful place in the house.

Mr. Nghia made animal bones by himself from experience accumulated over the years.

According to Mr. Nghia, preserving bone specimens is not difficult, just need to work hard to clean the dust and keep the house dry to be able to play for a long time. In the near future, he plans to expand the cafe still in the old style, so he will most likely also replenish his collection of bone specimens.

From another comment from someone who is also a member of the Vietnamese skeleton community, the hobby of playing bone slides can help prolong the time spent with their pets after they are no longer alive.