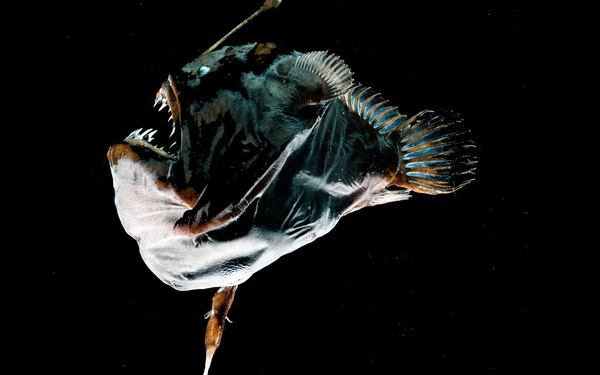 In the world, there are many species of creatures, most of them follow the normal laws of nature, such as males fertilize, females get pregnant, give birth to young, they grow up, continue the reproductive process , grow old and die. However, there are nThese creatures have developed unique looks, impressive superpowers, and some strange habits.

Looking at a glass frog from above, you might not notice anything out of the ordinary. But if you flip it over, you’ll see a small, fast-beating heart, a long, red pulse, and a segment of the intestines that digest food. These amphibians have evolved to have extremely thin and translucent skin.

So why did these frogs evolve to be able to see through? According to a study published June 9 in the journal Proceedings of the National Academy of Sciences, when light hits frogs from above, their silhouettes become difficult to see for predators.

These frogs live in the rainforests of Central and South America and spend a lot of time perching on leaves. Because frogs are surrounded by lush greenery, their green skin is ideal for camouflage. Meanwhile, their more transparent legs blur the outer contours of the body, making it difficult for predators to recognize the frog’s shape.

2. The relationship between wasps and figs

Strange relationships are often formed in nature. For example, wasps find a “home” inside a fig. Figs are essentially a bunch of small flowers, called inflorescences, that rely on wasps for pollination. In turn, the inflorescence provides a comfortable and safe home for the wasps during their very short life span.

According to the Insecta of the Netherlands, when female wasps hatch, they instinctively “sniff” receptive figs, or flowering plants ready to pollinate. Instinctively, wasps seek out the particular scent emanating from female fig flowers. Once they do, the wasps find their way into the soft, sweet flower through an opening at the end of the “fruit”. The hole is so small that many wasps have lost their wings and part of their antennae.

Once inside, female wasps are protected and out of sight, and they can lay eggs. According to the Journal of Nematology, wasps will never see the outside world again. Females die only 24 hours after laying eggs.

When the wasps hatch, the hatched males mate with the females, before digging their way out of the figs for the females. Male wasps spend their entire lives in figs and die shortly after creating the tunnel.

This strange behavior has kept the fig wasp alive for more than 60 million years, according to an article published in 2005 in the journal Proceedings of the Royal Society. At the same time, figs also benefit because the female wasp disperses pollen.

Mexican walking fish (Ambystoma mexicanum), also known as axolotl, are quirky creatures: These “fish” not only have pointed “horns” that protrude, but they can also “walk”. When approaching the bottom of a lake or canal, they will use all four legs from their sides to crawl around their habitat in Mexico City.

Although they look like overgrown “heterosaurs”, they are actually amphibians. Often amphibians are equipped with gills when they are young so they can breathe underwater, when they become adults they will remove the gills, ready for life on land. But axolotls keep their gills and stay in the water – a phenomenon known as neoteny, according to an article in the journal Nature.

Never leaving the water, the axolotl is found in the lakes of Xochimilco near Mexico City. When growing up to 12 inches (30 cm) long, they feed on small insects, worms, mollusks, and crustaceans. Historically, these grin-faced creatures were at the top of the food chain, but invasive fish – such as tilapia and carp, which feed on baby axolotls – and pollution now threaten their existence. Axolotl is also quite popular among aquarists.

Females do not always have to bear the burden of pregnancy. According to Scientific American, for seahorses, tubefish and sea arowanas – members of the Syngnathidae family – the males will become pregnant. Seahorses and tubefish carry their young inside their sacs, delivering nutrients such as energy-rich fats through the sac tissue, while sea arowana eggs simply stick to the outside of the male’s tail.

Eggs on the tail of a male sea arowana

Is there any benefit to this strange process? Because the female can focus solely on egg production (leaving the rearing roles to the male), seahorses can give birth in the morning and become pregnant again in the evening, according to National Geographic. This helps to increase the number of species for a better chance of survival.

Thanks to the males that carry the offspring, the females are also less likely to experience energy depletion. Typically, females expend more energy producing eggs than males producing sperm, according to Oxford Academic. By delegating the task of carrying the eggs to the male, energy needs are shared more evenly.

The male lantern fish is clinging to the female

Male and female anglerfish are so diverse in appearance that at first glance you might think they are different species. Females can be up to 60 times longer and 500,000 times heavier than males; When scientists first observed male and female lantern fish, they thought they were looking at the mother and the fry, according to an article published in the Journal of the American Society of Hydrology and Scientific Research.

When looking for lantern fish, you often see images of females. Found mainly in the deep seas of the Atlantic and Antarctic Oceans, female lanternfish look like monsters: they have bright “lanterns” hanging from their heads to lure prey and teeth. scary big fangs protruding from the mouth.

But the arrival of the males makes things even more bizarre. According to New Scientist, when mating, a male fish acts like a parasite. Biting on the female’s side, the tiny male fuses his body with the female’s so that he can get the female’s nutrients by sucking her blood. Since the male has no need to swim or see, his eyes, fins, and several major organs begin to deteriorate.

In return, it obtains everything it needs with almost no effort, while its sole responsibility is to provide reproductive cells when the time is right. At that time, the male and female respectively drop their sperm and eggs into the water to fertilize.

Have you ever wished you could go back in time to your youth and start your life over? As time goes on, our bodies are designed to grow, age, and eventually die. However, not all species follow this cycle. The immortal jellyfish Turritopsis dohrnii is a challenger to the laws of nature.

According to the American Museum of Natural History (AMNH), when injured or facing starvation, this jellyfish can press the “reset” button. With this re-establishment, the adult jellyfish return to the polyp development stage. The polyp then continues its life cycle and gives birth to numerous genetically identical jellyfish.

Scientists think that the immortal jellyfish uses a process called cell translocation to create this rejuvenating feat. In this process, a mature cell that is specialized for a certain tissue can transform into another type of specialized cell, AMNH said.

At its largest size, this jellyfish is still less than 5 mm in diameter. These jellyfish were first discovered in 1883 in the Mediterranean Sea, but they were only called immortal jellyfish in the mid-1990s. When a German student was studying them in the laboratory, he We see a strange phenomenon. When the jellyfish is stressed, it will drop to the bottom of the container and return straight to the polyp, skipping any fertilization or larval stages. The researchers call it “a butterfly that transforms back into a caterpillar.”