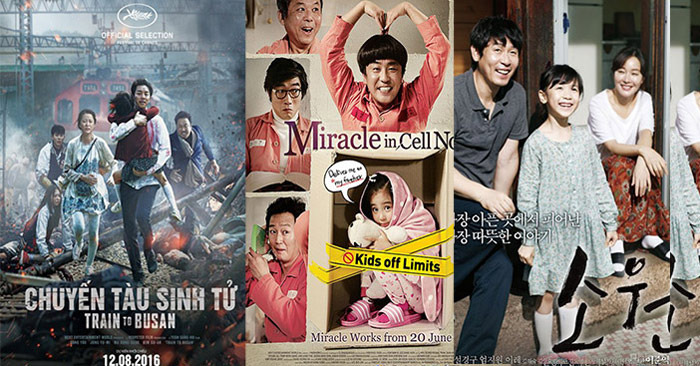 Korean movies with content about romance, action with thrilling and attractive details are a great choice for those who are lazy or do not have much time for dramas. Here are the best movies, the best Korean movies, please refer.

This is a very good Korean film, achieving many box office records and winning the Palme d’Or at the 2019 Cannes Film Festival, winning 4 major awards at the 2020 Oscars.

The film’s content revolves around a poor family, living in a shabby apartment, struggling to eat every meal. Until one day, the eldest son got a job as an English tutor for the daughter of a wealthy family. From then on, he tried to bring his whole family to live “parasite” in this rich but trusting house.

With a super-comedy, super-poisonous script, “Extreme Job” is a movie that scores absolutely for the audience. The content of this impressive Korean drama revolves around 5 police detectives who specialize in investigating drug cases. The group disguises themselves as employees working at a chicken restaurant to investigate a criminal gang. However, thanks to the special delicious chicken recipe, their restaurant suddenly became famous with a lot of trouble and funny situations. This is a funny Korean movie that will help you relieve stress.

The film revolves around a serial murder case, the culprit is still a mystery. Tae Suk – a talented policeman, said that all of the above murders were caused by the same perpetrator. Jang Dong Soo – a notorious big brother attacked by a serial killer, K. Dong Soo is a rare victim who survived and became the only witness to K. Jung Tae Suk’s crimes shook hands. with Jang Dong Soo to track down the mysterious serial killer demon.

This Korean odd film exploits the love story of an elderly couple but is equally romantic and touching. The philosophical lines about both love and family feelings in the film have brought tears to the audience.

The content of the film revolves around the family of Mr. Nam Bong, a hot-tempered, patriarchal husband who often scolds his wife. Mrs. Mae Ja, Mr. Nam Bong’s wife is a patient wife, devoted to her family. When the family had a big event, his wife lost his memory, and his son was unemployed, he also showed signs of forgetfulness, his life only depended on his daughter-in-law. When the son and his wife moved to his grandmother’s house, only Nam Bong and his wife took care of each other. Only then did he realize how indifferent he had been to his wife, and tried to make up for her.

This good Korean movie is built with disaster content, but from a humorous perspective, it gives viewers a feeling of both fun and suspense.

Yong Nam is a pretty famous guy in the climbing club when he went to school, but he was unemployed after graduating. After a class reunion party, suddenly a poisonous gas that can be deadly is leaked all over Seoul. Yong Nam with experience climbing tried to rescue people by climbing over buildings.

This is a Korean short romantic romantic drama that is highly appreciated. This drama is about a woman (Son Ye Jin). Before she passed away, she promised her husband that she would return on a rainy day next year. And it is true that she appeared in front of her husband on her son after 1 year but lost all memories. The husband with love has gradually helped the girl regain her forgotten memories.

In-gyu is a man around 30 years old but looks like a 7 year old kid. His mother, Ae-soon, has taken care of her son for 30 years. One day, Mrs. Ae-soon realizes that she is about to leave the world, leaving In-gyu alone in this world.

In order for her son to live a good life, Mrs. Ae-soon started making a to-do list. Those are very normal things, but for In-gyu, it is completely strange and difficult.

In-gyu’s mother’s devotion and late adulthood brought many laughs and tears to the audience.

The context of the movie “Train To Busan – Train to the Dead” is the country of Korea attacked by a virus that turns people into zombies. The outbreak of the pandemic caused those on the train from Seoul to Busan, a father and daughter, a couple about to welcome their first child, and several high school students, having to face the zombies to protect them. protect your loved one. This is one of the best Korean movies.

This is an extremely touching Korean family love drama with the content revolving around the character Yong Goo. He was slandered by the bad guys and sentenced to death. His last dream is to see his baby daughter Ye Seung. In order to fulfill his wish, the cellmates planned to reunite the father and son…

Female student Eun Ah (Nam Bo Ra) chose to commit suicide after being raped by a group of male students. Eun Ah’s mother is too distressed and determined to find out each culprit who harmed her daughter. That miserable mother defied everything, ignored the law to avenge her daughter by her own hand.