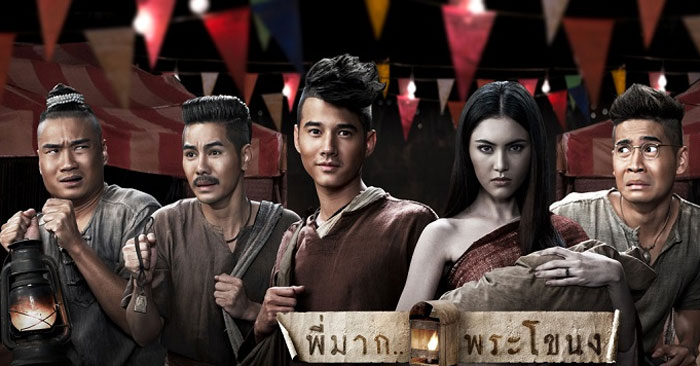 Thai ghost movies, Thai horror films with many creepy details with their own colors will give viewers suspense, fear, and horror in the true sense of the word. Here are 10 best and most horror Thai ghost movies of all time, invite you to enjoy.

This film, produced in 2013, is one of the most popular Thai films of all time. Love is a movie that combines many elements including horror, humor, psychology, romance, and historical period. The content of the film is based on the Thai folk tale about the legendary ghost Mae Nak Phra Khanong.

After the war in the Kingdom of Siam, Mak invites his 4 friends Ter, Puak, Shin, Aey home to visit his wife Nak and his newborn son. However, people in the village believe that the person living in his house is just a ghost, and Mak’s wife died giving birth to the baby. Mak’s friends decided to start investigating the matter.

This Thai horror movie was filmed in the Sathorn Unique Building, a popular suicide spot and home to many homeless people. This place is associated with a series of scary and strange death events.

The film is about two best friends since childhood, Ib and Boum. Both are rich ladies, but their families are bankrupt and have to bear huge debts. In desperation Ib and Boum decide to commit suicide together. Not brave enough like Ib, Boum ran away.

After 20 years, Boum became a successful businessman, and had a beautiful daughter named Bell.

After returning to Thailand, Bell was led by a mysterious force to the site of a terrible incident 20 years ago. Since then Bell and Boum have both experienced horrible nightmares.

This supernatural thriller is one of the most popular horror movies in Thailand and is recognized worldwide.

On the way home, Tun and his girlfriend Jane run into a girl. In a panic, they drove away leaving the victim alive and dead. After that accident, Jane always has nightmares, and Tun and his friends die inexplicably.

This Thai thriller revolves around the story of a family moving into a new home. Everything was going well until one day the corpse of a maid was brutally murdered in the house next door. Since then, strange events related to the unfortunate girl have occurred continuously.

The content of the film revolves around the legend of a ghost of a female student who went missing 30 years ago. Since then, the ghost of that girl always appears, every time the lights go out, the girl brings a spirit with her.

This Thai horror film is about a male student named Sense. During summer vacation, Sense returns to his hometown to meet Dear, an old friend he has a secret crush on. Upon arrival, Sense learns that Bomb (Dear’s current boyfriend) has been mysteriously missing for 2 years. Sense and Dear decide to search for Bomb. During this journey, they encounter a series of bizarre phenomena. In the film, there are scenes with sensational images, stimulating the audience’s vision.

In this ghost movie, Star – hotgirl of a university and 6 other classmates are forced to attend a night class located in Room Zero. This room is considered the domain of students who died before graduation.

These 7 reluctant students have to join the afterlife class in the middle of the night and have to find a way for the dead students to pass the graduation exam.

This Thai horror film is a tragic story revolving around the mistakes that lead to a tragic end of school age. Nard, a high school girl has a romantic relationship with Mac (the senior). When Nard became pregnant, Mac’s mother forced him to cut off contact with her and send him abroad to study. Then Nard died while having an abortion and became a demon, haunting the apartment he used to live in.

This is an American-made horror film, Asian horror filmmaking techniques combined with a bold American storytelling style have brought the audience an unprecedented horror movie experience.

Jim and Julie go to Thailand to travel. By chance, Julie finds a strange object in the cemetery for ghosts. From there, they are haunted by an evil ghost and have only 3 days to break the curse. In the process, they plunge deeper into a supernatural world, having to confront scary and terrible things.

4BIA is a horror film with 4 different stories including: Loneliness, Deadly Charm, Man in the Middle and Last Flight.

Loneliness: The content of the story is about a girl who has to have a cast on her leg after a traffic accident. While she was bored because she had to stay at home, she received a message from a stranger, who was also lonely and wanted to get acquainted. After a few messages, the girl learned that the stranger was a guy who had been dead for 100 days.

Death Charm is about a schoolboy’s revenge against his bullies.

The person in the middle: A group of 4 friends invited each other to go camping but unfortunately their boat capsized causing 1 person to fall into the river. The other 3 thought their friend was dead but the truth is that all 4 of these guys are dead but they don’t realize it.

The Last Flight is about strange and terrifying phenomena during a flight.