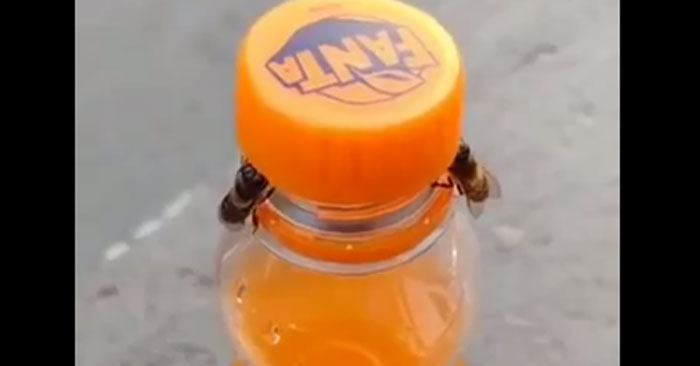 Bees are known for being intelligent, well-organized and disciplined insects. They can even do math, recognize faces and work together as a team.

Recently, a Twitter user shared a video of two bees working together to open the cap of a bottle of Fanta, looking for the sugary liquid inside. Immediately this video attracted the attention of many people and spread widely on social networks.

According to ViralHog, the video above was shot by a Brazilian worker. She said a guy bought her this soft drink during her lunch break. She was very surprised when she saw two bees “trying to steal” it and was able to capture the strange scene.

Let’s analyze scientific studies to see if tiny bees can do this.

How smart are bees?

The brain of bees is very small, smaller than the size of a grain of rice. But the number of neural connections in the brain determines their intelligence, not the size of the brain.

There are less than 1 million neurons in the bee brain, but that one neuron can make more than 100,000 connections to other neurons.

According to the research results of Karl von Frisch, a famous German scientist, bees have an excellent sense of smell and vision, are able to time the apparent time of the sun, and can even communicate with each other. by dances.

A 2017 study published in the journal Science found that, after being trained by scientists, bees were able to masterfully use the ball to dribble through maze lines for a reward of a little sugar water.

A study published in the journal PLOS One in 2020 by Vietnamese scientists showed that some native bees used the droppings of birds outside their nests to scare and scare away killer wasps. . This is a clever strategy of bees to protect their nests.

According to the results of a 2019 study published in the journal Science Advance, honey bees can do addition or subtraction math. Scientists trained bees to add 1 and subtract 1. For example, when they would have to add 1 when they see 2 blue dots, and subtract 1 when they see 3 colored dots. yellow. The bees give their results through multiple-choice responses by flying into one of two rooms with the results printed in the doorway.

The results of the above scientific studies show that with their small but dense brain, bees are smarter than we think. And so it is not an impossible thing for two bees to work together to open a bottle of soft drink.