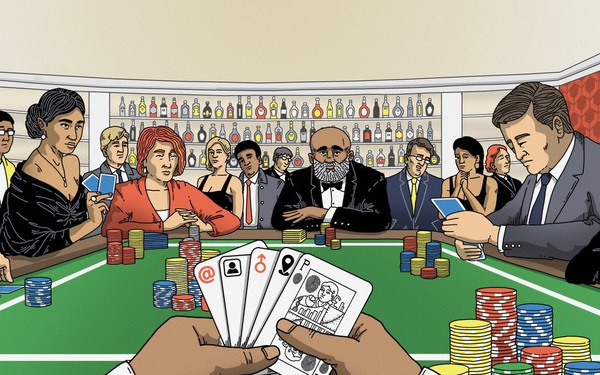 Now, he is in the process of determining whether Sky Bet, his familiar application in the times of his fall, knows well about his financial problems and whether, it is continuing to find ways to “suck. blood “a person has no money in hand.

The recorded data showed that Sky Bet held a separate information record about Gregg. This company, or one of the corporate houses they have hired to collect user data, has access to a bank statement, home loan details, user location and a picture. Specific “portraits” of gambling habits that focus on slot machines and football betting.

With the data gathered, Sky Bet may have sought to “invite” players back

After Gregg stopped betting, Sky Bet’s data-building software labeled him a “customer that needs to be pulled back”. He received emails promoting the chances of winning $ 40,000 in slots, after the marketing software marked that Gregg was more likely to open them. One prediction model even estimates Gregg’s value if he starts to bet again: around $ 1,500.

Gregg learned of this behind-the-scenes stalking after he hired an attorney, and took advantage of UK data protection laws, which require companies to share with people that they are holding the type. any data about them. He wanted to determine if Sky Bet had filed and put him in sight even though they knew he was trying to break the gambling habit.

Gregg shared those documents with the New York Times on the condition that his full name would be kept confidential, as he was concerned that these details would affect his work as well as deteriorate. relationship with friends and family.

Sky Bet made no complaints about the authenticity of these recordings. But the company says it does not have access to specific information such as banking and home loan data, which is collected and stored by outsourcing companies.

As gambling apps are becoming more and more popular around the world, these documents show how one of the gambling industry’s most popular applications uses data. how to leverage current most powerful customer portrait building and tracking techniques. Instead of using the data to identify and help problem gamblers like Gregg, according to industry critics, the information is used to further entice players.

Gambling apps like Sky Bet make gambling as easy as booking an Uber ride. A lot of people think the bookmakers are innocent. But according to a group of gambling addiction experts, data privacy activists and UK gambling critics – the world’s largest application gambling market – the papers This points to a warning both for players and law enforcement in countries like the United States, where similar services are growing rapidly. More than a dozen states, including New Jersey, Nevada and Virginia, have legal in-app gambling.

The companies behind gambling applications, they said, need more scrutiny and are calling for tougher laws to identify problem gamblers and prevent data from being used. in a way to extract more money from gamblers.

“Wherever gambling companies operate, there is an understanding that data is an important part of it working.”said Ravi Naik, the London-based attorney behind Gregg’s data collection attempt. “When we start to look inside the safe, like we are here, then we will see how holes are exposed for these platforms.”

Mr. Naik said that the amount of data he has so far is only a small piece of a giant puzzle. He filed an additional legal request in the UK to be able to clarify more details about what betting companies do with the collected data, and answer the question of whether they will be used in the personalize offers, promotions or create other forms of inciting, attracting customers back, especially the type of “customer value” or not. A report from the British Parliament last year put out a staggering figure: 60% of gambling industry profits come from just 5% of customers, “bloodthirsty gamblers”, or are in danger of becoming a this.

“We are trying to demand transparency.”Mr. Naik said, “We should have known what was going on without this much attorney’s work.”

Last year, Sky Bet was the UK’s most popular gambling app, with around 140,000 downloads per month, according to numbers from market research firm Apptopia. Formerly part of Rupert Murdoch’s Sky media company, it is now owned by Flutter Entertainment, a company that owns several gambling apps, which generated $ 7.4 billion in revenue last year.

In Sky Bet’s 10,000-word privacy policy, the company says it will collect personal information including browsing history, amount of money spent, demographic data and behavioral information, for example. like the user or betting on any sport. This data may be shared among at least 12 betting services that Flutter owns, and may also be used for advertising and personalization purposes, while financial information is collected. For anti-fraud and money laundering purposes.

Mr. Nigel Eccles, who previously served as the CEO of FanDuel, one of the largest gambling apps in the United States that is now owned by Flutter, said that online betting companies do extensive data analysis. to recognize the best customers. These companies can see how much money people are staking and try to predict what will make them pour more money. But, he says, gambling companies are also in a very fragile position, because their best customers are most likely addicted gambling addicts.

“The problem is not that they have access to this kind of data, but what they do with it.”Mr. Eccles said. “If you use data in a way that you know, or should know, is harmful to your users, then that’s a serious problem.”

Mr. Naik, who had previously helped expose misuse of the data by the political consulting firm Cambridge Analytica, was contacted by Gregg last year, as he was looking for help to obtain copies of the data. from Sky Bet and the companies they collaborate with to shape their users.

The data that he and Mr. Naik got includes 34 pages of analyzing Gregg’s financial history from a company called CallCredit – which performs identity checks and anti-fraud for Sky Bet. It includes information about bank accounts, loans (including home loans), with a level of detail up to monthly payments. A loan arrears in March 2019 are shown in bold.

Iovation – another company also used by Sky Bet, presented a sheet with nearly 19,000 data boxes, including identifiers for the devices that Gregg used to transfer funds to his betting account and There is also internet information about where you made these money orders.

A document from Signal – another company that Sky Bet uses to have user tracking tools (online and offline), offers a list of personal features, such as gaming history. slot and football is the most popular Gregg sport.

Sky Bet has sponsored the EFL Sky Bet Championship, which is second only to the Premier League, since the 2013-2014 season.

Most alarming, according to Mr. Naik, is how the software offered suggestions to re-engage Gregg after he stopped gambling at the end of 2018. The data file listed Gregg as a customer to “get again, ”there are snippets of code that note that he appears to be receptive to gambling advertisements that are related to Las Vegas. Because he made 2,500 deposits to Sky Bet, he is considered a “high value” customer.

“They transformed your gambling addiction and turned it into code.”Mr. Naik said. “That Gregg is of high value because he is willing to spend money regularly, with high amounts of money, even when it makes it difficult for him. It was as if they were saying: make him come back – he is much more valuable. “

Sky Bet, for its part, said in a statement that it does not have access to financial information such as bank statements or home loans, which are collected and stored by an individual. outside companies, and they also cannot access the user traceability data. The company says it uses software to identify problem gamblers, based on frequency of play and recharge, and to limit a person’s ability to play if they are found to be at risk, and the player can exclude himself from this form.

The announcement also includes: “Sky Betting & Gaming takes its gambling safety extremely seriously. While we run advertising campaigns based on our customers’ behavior and preferences, we will never attempt to advertise to anyone who might be at risk from a bet.

TransUnion, the US credit rating organization that owns CallCredit, Signal and Iovation, says it still follows data protection laws, while betting platforms use their services in a variety of ways. Various, including to identify fraud or money laundering.

England has always been on the front lines of the front… online betting. By 2020, the betting application market in the country will bring in $ 7.3 billion, nearly double the second largest market – Japan, according to research firm Global Betting and Gaming Consultants. This week, four of the 5 most popular free sports apps on the App Store in the UK are related to betting. These betting companies also own football teams and dominate advertising time in sports leagues.

Great Britain is at the center of the global debate over the application of additional laws to the new generation of betting applications. The UK government has begun an evaluation of gambling laws that will include the consideration of new data usage laws and a financial viability test.

Lawmakers should pass new laws that allow companies to use data to identify problem gamblers, but also limit their ability to use the data for advertising and sales, he said. James Noyes, from the Social Market Foundation, London. “They determine what type of play you will play, what you like or hate, your tendencies to spend money and your risk of risk.”Mr. Noyes said. “They take information about you and use it against you.”