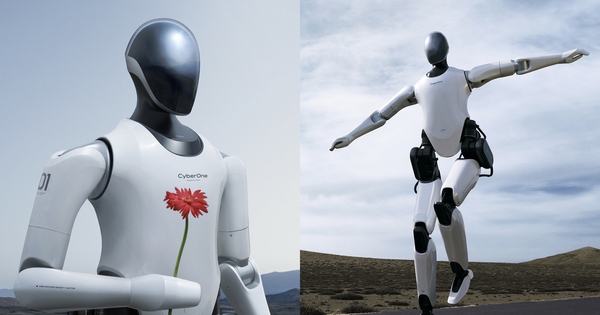 Xiaomi recently introduced a humanoid robot called CyberOne. Unlike the CyberDog robot that uses the shape of a dog, CyberOne has a human-like appearance and can simulate many of the movements of a normal person.

CyberOne is finished mainly from metal, with a height of 177cm and a weight of 52kg, with an arm span of 168cm. According to Xiaomi, CyberOne can detect human emotions and reconstruct the 3D texture of the real world.

“CyberOne supports 21-joint free movement and achieves a real-time response rate of 0.5ms per joint, allowing it to fully simulate human movements.” However, in the promotional video posted by Xiaomi, it seems that the movement and CyberOne created are quite… humorous and not very like a normal person: the steps are quite short and clumsy, looking like a a child running rather than an adult walking comfortably. CyberOne’s speed is also only 3.6km/h, which is slower than the average person walking.

It is unclear what Xiaomi plans to do with CyberOne. In a press release sent to the media, the company said that CyberOne is basically a product for Xiaomi to “show off” its advanced technologies, and confirms that in the future these technologies will appear. in other products of the company.